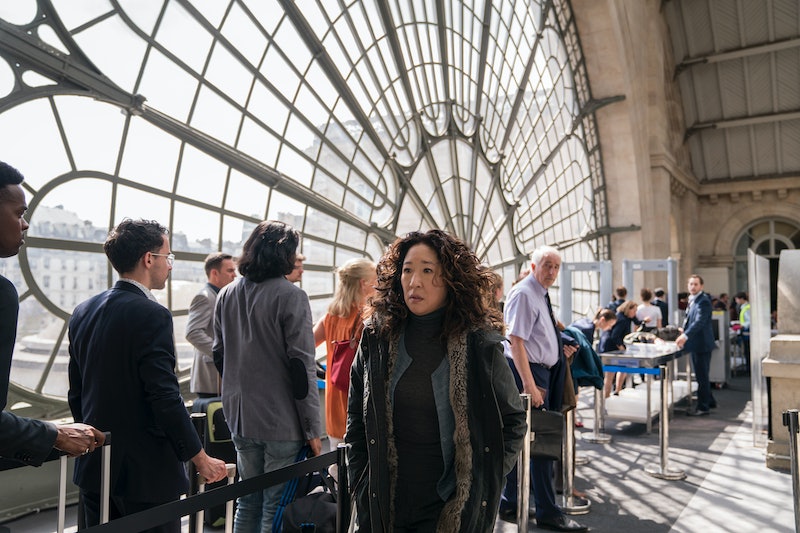 Things are about to get awkward on Killing Eve Season 2 — even more awkward than the time that Eve (Sandra Oh) stabbed Villanelle (Jodie Comer) while snuggling with her in bed in the Season 1 finale. As if their complicated cat-and-mouse relationship couldn't get more weird and delicious, the second season of the BBC America drama is adding a new killer to the mix to occupy Eve's attention, which may or may not make Villanelle jealous.

When Oh, Comer and co-star Fiona Shaw joined executive producers Sally Woodward-Gentle and Emerald Fennell at the 2019 Winter Television Critics Association press tour over the weekend, they revealed that Eve begins hunting a new killer early in Killing Eve Season 2 (premiering April 7 on BBC America). While Eve and Villanelle's relationship will always be the core of the show, the new addition to that dynamic is going to shake things up this season.

"With everything with this show, it always comes down to ... the gravitational pull that Eve and Villanelle feel towards each other," Fennell says. "But of course what is without a doubt is that Eve has a particular sense for women and female assassins. What is really interesting is saying, 'What do we do when somebody else comes along? Do we find Eve is a female assassin expert or is she a Villanelle expert? And what does that mean for her?' We know she’s brilliant and she knows Villanelle inside out and suddenly there’s someone between them for the first time."

Woodward-Gentle adds, "And what would happen to Villanelle as well if she thought that Eve’s gaze wasn’t always on her? That’s really interesting."

The critically beloved first season of Killing Eve ended with Eve finally finding Villanelle's flat, only to then collapse exhausted on the bed next to her. Just when things were starting to get confusing for the assassin and her would-be hunter, Eve stabbed Villanelle, adding another complex layer to their dynamic.

Throughout the first season, Eve and Villanelle’s relationship was so unpredictable that you never really knew if they were going to kiss each other or kill each other. Obviously what happened between them in the finale has changed things even more.

"What is most interesting about Eve stabbing Villanelle ... is Villanelle’s reaction to that, and just how emotionally she perceives that," Comer says. "It both affects them and changes them in a way neither of them are quite expecting. At the start of the series we see Villanelle in a very different way. She has no control of the situation."

Oh agrees, adding, "You see them vulnerable in slightly different ways. They’ve crossed a line and there’s kind of no going back. We have a lot of energy at the beginning of the series and that pushes both of them into a different place of vulnerability."

When asked if Eve and Villanelle have a relationship akin to Harry Potter and Voldemort's, where neither can live while the other survives, the stars and showrunners laugh.

"Oh who knows," Oh says while laughing. "Who knows!"

"I kind of like the Harry Potter theory," Comer says.

"So Villanelle’s a Horcrux!" Fennell adds.

When it comes to filming those intense scenes between Eve and Villanelle, both Comer and Oh are hesitant to open up about how they get into that headspace.

"You’re trying to get inside the mind of the person who’s acting it, but it’s likely an impossible question," Oh agrees. "It’s so difficult to really be able to clearly express, and it’s so personal a part of the process of an actor that I would not want to share it."

Whatever it takes to get both Oh and Comer there, we don't need to know. We just need it to happen so they can create even more addictive seasons of Killing Eve moving forward.