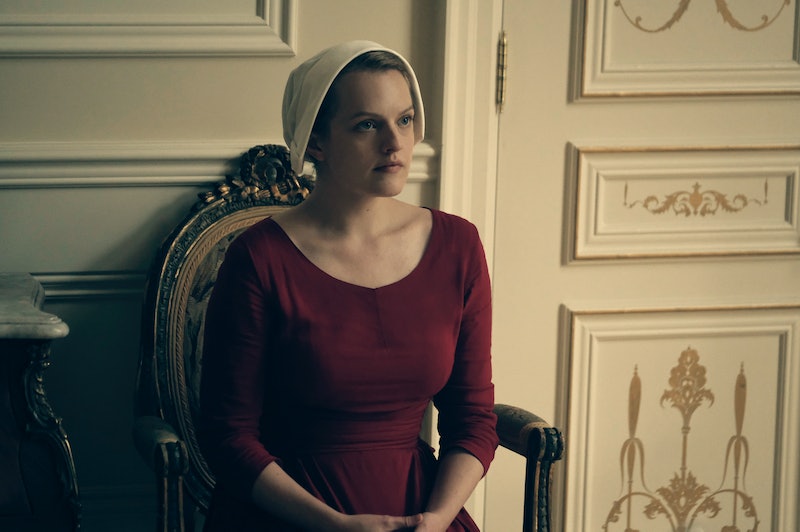 After the first few episodes of The Handmaid’s Tale, I felt discomfort I couldn’t shake. The show takes place in a dystopian universe where the U.S. has become a brutal theocracy and fertile women are essentially turned into sex slaves. But that wasn’t what caused my unease — though some scenes were so graphic I had to look away. As a Christian, I see The Handmaid's Tale as a sobering reminder that the Bible can be used to justify unspeakable evil. And that's exactly why every Christian needs to watch the harrowing tale.

The Hulu series, based on Margaret Atwood's novel of the same name, is captivating within the first five minutes. We immediately meet the titular handmaid, Offred (Elisabeth Moss), and see glimpses of her life before the religious takeover. She was once happily married with a daughter and successful job before being ripped from her family and everything she knew to serve as a handmaid to Commander Frederick Waterford (Joseph Fiennes) and his wife Serena Joy (Yvonne Strahovski) and forfeit her real name for one "of" her commander (hence Offred).

As we learn all about this reality, pieces of The Handmaid’s Tale start to feel especially familiar. And as lawmakers and pundits push for more Christian values to govern society in real life, the series offers warnings in spades. (Spoilers for The Handmaid's Tale will follow.)

In one early scene, the women gather around a fellow handmaid and chant, “It was your fault” after she talks about being a victim of sexual assault. The disturbing scene seems far-fetched, until you remember instances like the one in which Bob Jones University came under fire in 2014 after 381 people claimed to have knowledge of the evangelical Christian school allegedly blaming sexual assault victims for decades, according to the New York Times.

Then there's the modesty angle. According to this fictional world's rules, women must cover their heads and wear gowns that cover them from their necks to their ankles — something I'm not unfamiliar with. When I was a teenager packing for church camp every summer, I wasn’t allowed to bring anything above the knee or sleeveless, in the name of modesty. Girls who disobeyed were thought of as temptresses — young women ignoring the rules because they wanted men to lust after them. Oftentimes, as Christian women, we are expected to keep the male gaze at bay at all times. The onus is on us to cover up — much like the women of The Handmaid's Tale, many of whom are called "sluts" before they are made to wear official handmaid garb.

Then there's the fact that in the world of The Handmaid's Tale, there is absolutely no tolerance for LGBTQ+ people. While I've not witnessed the extreme violence levied towards gay men and women in the series, the sentiment that drives the story isn't unfamiliar. I still remember the shock and sadness I felt when I heard one of my favorite pastors use a gay slur to describe LGBTQ+ people, and I'm not alone in this. Other examples can be found in many corners of the internet, including one pastor who came under fire, rightfully so, after actually celebrating the 2016 Pulse shooting in Orlando, claiming there are now "50 less pedophiles in this world."

Then there's the premise of the series itself: The sexual slavery forced on handmaids. If Christians are shocked at the idea of women being forced to bear children for infertile wives, then they haven’t read our holy text closely enough. In Genesis 30, Rachel and Leah both hand off their handmaids to Jacob, telling the servants to have sex with him and bear children.

Every time the series references Scripture or mirrors experiences that I recognize as a Christian woman, I wince. It’s often difficult to reconcile my love for Jesus Christ and his teachings with the wrongdoing committed in the name of religion, and the series practically runs on that feeling.

On one hand, I want to jump to Christianity’s defense and shout that not all religious people are this way. But I know that I’m speaking from a place of relative privilege, and that it’s important to listen and learn from the critical conversations had in The Handmaid's Tale.

After all, these conversations extend beyond a highly anticipated TV show — Christians are having them for ourselves, too. In late April, #ThingsOnlyChristianWomenHear started trending on Twitter thanks to Canadian author Sarah Bessey. People shared common experiences of being told marriage and motherhood are a woman’s ultimate purpose, ultimately shining a light on flawed expectations for women of faith.

Some women practically spoke directly to the plot of The Handmaid's Tale, by speaking to being accused of promiscuity for using birth control — in the series, the handmaids are told God cursed the U.S. because women wouldn’t give up their birth control.

The encouraging thing is that some believers are starting to address these pressing problems. Bessey, the author responsible for the hashtag campaign, is the author of Jesus Feminist, which argues that the Biblical Jesus genuinely respected women and was a feminist himself. There's also the Why Christian Conference — an event where progressive Christians from all backgrounds gather to discuss what's drawn them to faith. The conference places an emphasis on LGBTQ+ and diversity among guest speakers.

While I’d love to be able to dismiss The Handmaid’s Tale as just another dark, marathon-worthy work of fiction, I can’t. And while I recognize that Christians may not be comfortable watching the show, maybe it's time to get uncomfortable. We’re used to hearing Bible verses in encouraging sermons, not as the rationale for executing people at random and forcing women to carry babies against their will, but the twinge of familiarity that any evangelical Christian will feel watching this world be explored should tell us something.

While politicians and pastors alike pushing for the U.S. to return to traditional, and often Christian principles, that push can be problematic. The Handmaid’s Tale is a reminder that separation of church and state is a vital rule and that in a society where religion takes precedence over democracy, no one is safe — not even those who believe.