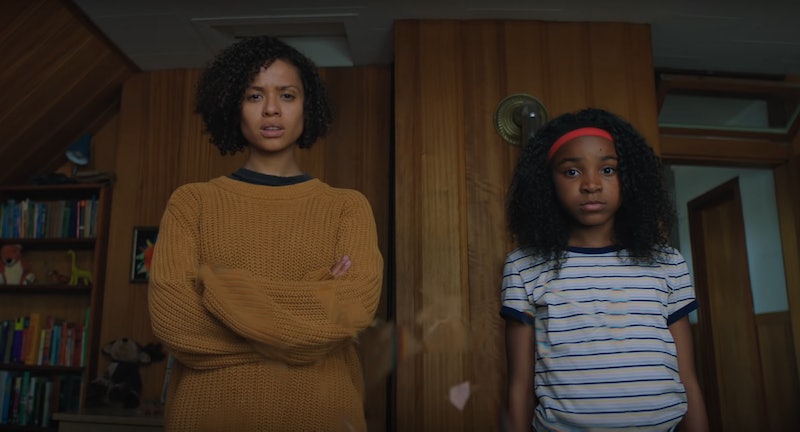 Fast Color is a movie about a superhero, but it doesn't seem quite right to call it a "superhero movie," because of what that term usually means. The film is about climate change and addiction and motherhood and tradition and strained parental relationships, and, oh yeah, there are also some secret, special superhero-like abilities involved. "Most superhero movies are about white men destroying things in order to save the world, which seems backwards," Fast Color director Julia Hart tells Bustle ahead of her film's April 19 release. She adds with laugh, "But [that's] also very typical of white men."

Fast Color, which Hart co-wrote with her husband Jordan Horowitz, is about a woman named Ruth (Gugu Mbatha-Raw), who has abilities that can literally shift the Earth. The thing is, she's not so good at controlling them and the government is trying to track her down. And the entire world is in the eighth year of a total drought. And Ruth is a recovering drug addict with a very strained relationship with her family. The film unfolds her story further bit by bit, slowly letting the audience in on information that Ruth and her family already have.

Hart came up with the story when she became a mother herself, because she hadn't seen any superheroes who were also moms. She wanted to work differently within the genre and step outside of that established mainstream. "While male power in a lot of stories is destruction, we wanted to tell as story about female power, which is, of course, creation," she says. It was intentional for the movie to refer to what Ruth can do as "abilities" rather than "powers," Hart says, "a lot of superheroes are about the spectacle and the powers, and we wanted to tell a story about the women and the characters and have all of those other elements be a backdrop to that."

While Hart and Horowitz were always writing about a woman, the character became specifically a black woman when they saw Mbatha-Raw in Beyond the Lights and began writing with her in mind. Thankfully, the logistics worked out and the actor came on board.

As a white woman, Hart was sure to learn from the black women and girls starring in the film. They influenced their characters, which in turn, influenced the sets, costumes, and entire world of the film. "I hate it when I see a movie where I can tell they just changed what was originally a male character's name to be a female character but haven't actually written a woman," Hart explains. "And so, while it isn't on the surface a movie about race, it definitely became about the power of women of color more explicitly than just the power of women."

Fast Color is also about the world they live in. There's a lot of world-building you can do when the plot sets up an eight-year drought, but the film doesn't delve too deeply into the environmental realities. Hart explains that the focus of the film is meant to be the on women more than anything around them. "I definitely wanted [the climate change message] to be in there, but I didn't want it to be hitting anyone over the head," Hart explains. "But I do think that it's obviously — especially as a mother of young children — one of the most pressing issues at hand today, and so I definitely wanted to explore that in the movie, as well."

In Fast Color, the climate change themes also come into play with Ruth's supernatural abilities and the effect she's able to have on the Earth. Remember, she's about creating, not destroying, and a climate emergency is a fitting situation for utilizing that ability.

But while her movie is about being a mother, a black woman, an addict, a person living during a climate disaster, and someone with extraordinary capabilities, Hart didn't intend audiences to take anything in particular away from it. Her goal was for the film to affect every viewer differently, depending on their own life experience and worldview.

"The world is a really complicated place right now. America is a really complicated place right now. And I'm not a politician or an activist, but I do feel a responsibility to put positive, powerful, meaningful messages out into the world," Hart says. "Honestly, at the end of the day, whatever people connect to in it, I'll be grateful if it just makes them think a little bit more about the world that we're leaving our children and what they can do to make it a better place." You don't have to be a superhero to do that.