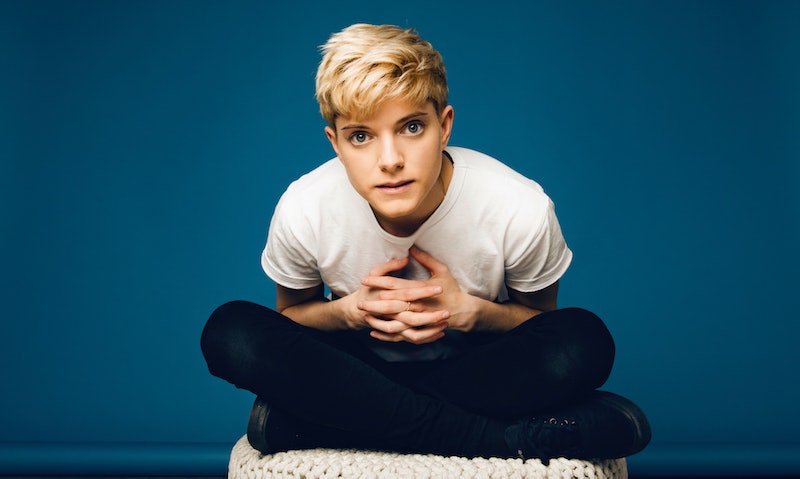 It's comedian Mae Martin's second full day self-sequestered in her London apartment as part of the global bid to contain COVID-19, and she's already worried she'll atrophy into a slug or a jellyfish — or whatever that slug-like jellyfish that looks like "a miserable man" is called. (She probably means the blob fish.) So far she's kept busy with odd jobs, but she gives the situation 24 hours before she starts losing her mind and/or corporeal form.

Thankfully, anyone else in the same boat will have Martin's new Netflix show Feel Good to stream come March 19. The world might feel like it's standing still and speeding rapidly forward all at once, but the TV release schedule is so far chugging along unperturbed. When I ask Martin how she's doing ahead of the launch, she says she's good. "I mean, good is a relative term," she clarifies. "[It's] the end of the world."

On Feel Good, Mae Martin plays Mae Martin, a version of herself with whom she shares a lot of the same biography: both are Canadian comics living in the UK, both are recovering from substance misuse, and both are queer women who've dated women who identify as straight. "It's sort of where I was at 10 years ago," the 32-year-old says. If 32 seems young to have co-written a show based on your own life, it's important to note Martin started doing stand-up when she was 13. "I've had close to 7 million TV projects go in the garbage and not work out, so this is…" Martin trails off.

Feel Good does more than just "work out." Across six 25-minute episodes, it wittily captures the early phases of being in love: the swirling vortex of emotion, the red flags you're all too eager to ignore, the unbearable need to pick up your phone and text-text-text the other person. "There should be breathalyzers on phones," Martin says. "Or they should have an auto-lock when it notices key combinations of words like, 'Are you mad at me?' Then it just shuts it down."

Compared to Martin's incisive stand-up specials, which focus on her sexual identity and past drug misuse, Feel Good cuts even nearer to the bone — particularly in its frank portrayals of Mae's relationships and sex life. "It felt new and interesting to show things like strap-ons and not being able to come or [having] some gender anxiety," she says. But it's Martin's continued exploration of addiction — and the vast definition of things that can encompass — that makes the show feel both universal and comfortingly prescient. Martin defines addiction as "when you're doing something compulsively, despite it having negative consequences in your day-to-day life." That can be cocaine, as it was for her, or it can be something as mundane as refreshing the news app every few seconds despite the stress it causes. Ultimately, Feel Good is a show about the anxious waiting rooms of our own minds.

Which brings us back, as almost every conversation lately does, to coronavirus. Without meaning to, I ask how Martin is going to cope without the outside world.

"It's a real problem," she says. "And the things that I do to feel better — stand-up, a 12-step meeting occasionally, and the gym — I can't do any of those things." Instead, Martin's been watching Survivor and noticing the silver linings, like that suddenly, strangers are actually talking to each other. "Everyone on the street was chatting to each other at a safe distance. But people are being like, 'Huh. This is crazy. I hope you made a will.'"

Another upside, for all of us, is that Feel Good is now on TV.

More like this
'The Queen’s Gambit' Season 2 Tweet Wasn’t From Anya Taylor-Joy
By Mary Kate McGrath, Jack Irvin and Grace Wehniainen
Ashton Kutcher Wants Danny Masterson “To Be Found Innocent” In Rape Retrial
By Jake Viswanath
'The Crown' Season 6 Has Suspended Filming "Out Of Respect" For The Queen's Death
By Bustle Staff
Ozzie’s Coming Out Scene With Kitty On 'That ’90s Show' Has Twitter Sobbing
By Brad Witter
Get Even More From Bustle — Sign Up For The Newsletter
From hair trends to relationship advice, our daily newsletter has everything you need to sound like a person who’s on TikTok, even if you aren’t.