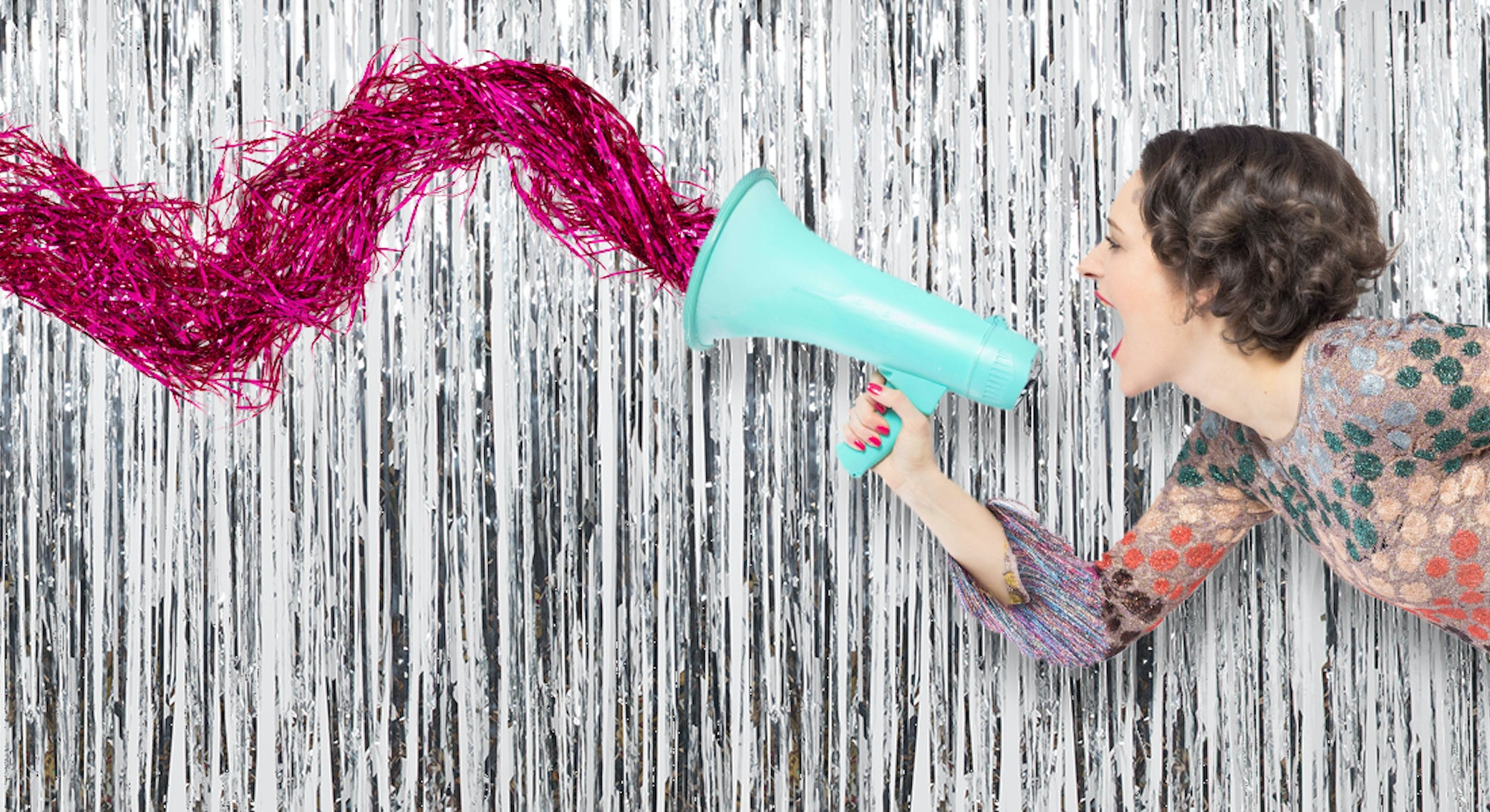 Phoebe Waller-Bridge, the creator, writer, and star of Amazon's dark comedy series Fleabag, is very aware of herself. She doesn't tread into the "forever on stage" desperation of some comedians (you know who I'm talking about) — it's just that sometimes, when she talks through the graphic sex and death jokes that up make her beloved, breakout series, she looks like she can't believe what's she's saying and, at the same time, is utterly tickled by the whole thing.

The British writer and performer has become something of a phenomenon precisely because she doesn't run away from this sort of discomfort, or any other kind. She'd rather plow right into it. Hence, Fleabag: a series about an offbeat woman in the throes of grief that is simultaneously shocking, cathartic, and hilarious. Waller-Bridge's brash courageousness stares right into the void, and thereby out-Louies even Louie, Louis CK's pioneering confessional, non-linear dark comedy that has become something of a gold standard in the genre.

"The inner monologue of women, I think, can be so polarizing to people."

Fleabag is named after its main character, a single, London-dwelling woman played by Waller-Bridge, who routinely breaks the fourth wall to address the audience. There's an intense shame that underscores everything Fleabag does in Season 1, though the audience doesn't know exactly what guilt she's living with until the final episode. What they do know from early on is that Fleabag's best friend and café business partner, Boo, accidentally killed herself when she was only trying to get injured — all for the sake of garnering sympathy from an ex. (Bad choices abound in this show.) The wound is fresh, yet Fleabag occupies most of her time by having sex, trying to have sex, and merrily tormenting her family or responding to them tormenting her.

The painfully true nature of the show and its distinctly female perspective may invite comparison to Girls and Broad City, but its somewhat meandering narrative style and laser-sharp character study are also reminiscent of male-fronted series like Master Of None, and of course, CK's acclaimed show. The latter had the bigger impact on Fleabag.

"Watching someone else do that so brilliantly, so freely and so rebelliously was really, really inspiring," Waller-Bridge says of CK when we meet at the Bustle offices. At one point, she says she dreamed up a wish list of artists she hoped would watch Fleabag, and he was at the top of it.

But even with some tried-and-true dark comedy inspiration out in the world already, Waller-Bridge's show is a risk. Because it dares to look into the depths of a woman who feels like she has no idea what she's doing, and is making complicated and screwed up choices and mistakes while trying to figure herself out. So, like... a real woman who you might know and relate to. Fleabag is created with a policy of unflinching honesty that the writer and actor hasn't found to be universally acceptable. "The inner monologue of women, I think, can be so polarizing to people," she says.

As we talk, Waller-Bridge rarely stops smiling, even when the conversation turns to the societal misogyny that's been some of the inspiration for her work. Her long, animated, and sometimes meandering responses often end with, "Did I answer your question?," and her eyes occasionally dart over to the publicity agent who's accompanied her to make sure she's getting the jokes too. Though they're coping with the some of the same pressures, the actor is as warm, friendly, and self-deprecating as her character is awkward and full of (mostly) quiet rage. Probably because Waller-Bridge channels her offbeat sense of humor a little (OK, a lot) more productively than Fleabag.

"I think I’ve always very instinctively pushed against that idea of having to be proper," Waller-Bridge. "Even outside of acting and stuff — just out in the world, the more proper a situation is meant to be, the more kind of intensely goofy I end up becoming." She credits her indulgent parents for her "cheekiness."

"I think I’ve always very instinctively pushed against that idea of having to be proper."

"I think, because my mum always found it so funny when I was like that as a kid, it kind of gave me permission to do it," she laughs. "That’s what you end up doing for the rest of your life — this thing that you got your mum’s attention doing in the first place."

"It's that shift, really, from that aspirational TV, which I feel like is the Sex And The City generation, where it was like, 'I want to be those women.' And we’ve come into an age of wanting to be able to relate to characters more," Waller-Bridge says. She hopes watching Fleabag struggle through extreme versions of familiar problems — buying the tiny tampons to appear dainty in front of a f*ckbuddy at the grocery store, receiving her otherwise saccharine-sweet stepmother's most caustic comments, and memorializing her dead biological mother by remembering her unique farts — will help the audience "feel a little less alone," and dispel those notions that women have to be perfect to be the stars of their own stories — something that male characters like Louie have never had to worry about.

"Just that permission to be contradictory and make mistakes and be in denial of them and be bad at things — that is OK, as long as overall, you’re trying to survive and essentially trying to be a good person, which I do think she is," Waller-Bridge says.

Like a lot of women, the actor is frustrated by the way television has compartmentalized women for so long. She acknowledges that there's recently been "a massive explosion of amazing, amazing female characters," and Fleabag is certainly a part of this sea change.

Fleabag isn't a Manic Pixie anything, and she's definitely not the put-together character either. "I guess what I was trying to do with Fleabag was make those two things run into each other kind of hard, and see what happens when they’re all one woman," Waller-Bridge says.

That dichotomy is actually the artistic reason behind Fleabag's signature red lip — even while her mascara runs down her face on the Fleabag poster, her lipstick remains on point. "I really wanted her to look like a normal girl who’s just made a little bit of an effort," Waller-Bridge explains. "Because then she’s hiding. It’s more interesting, what she’s hiding. It’s messier."

So, while Frank Underwood's asides to the camera in House Of Cards let you in on his little secrets, Fleabag's are an attempt to assure you that she's fine. Really. She's fine.

"The facade is that witness all the time — that camera is a pressure on her," Waller-Bridge says. "I certainly felt anyway that there was a kind of pressure of being watched or looked at all the time as a young woman, and being assessed and judged that way."

And the concept of living outside of oneself extends into Fleabag's sex life as well. She has no problem commenting on a sex act while it's happening, because sex is how she determines her self worth. ("Stay sexy," she reminds herself and the camera mid-hookup. "Always stay sexy.") She doesn't even seem to particularly enjoy sex, a fact that resonated with some of the actor's friends.

"I have so many girlfriends who’ve told me that they feel like — having watched it — that they relate to that feeling of being able to disconnect completely from the sex that they’re having," she says. "Which makes me sad because I think that’s more about women being told that they are there for someone else’s pleasure rather than they’re there for their own."

If all of this sounds deeply sad, you're getting the point.

"People relate to those moments when you go, 'I don’t understand why I’m feeling that. Someone farted, and it was funny but I’m supposed to be grieving. But it’s still funny. The fart is still funny.'"

"[Fleabag] trying to be funny while she’s in pain is a great contradiction to play," Waller-Bridge says. She describes the character from the audience's point of view; fitting, since they're Fleabag's confidante throughout the series.

"It's that feeling when you meet someone at a party or at a bar — and it’s the nighttime, and they’ve just been the life and soul of the party, and they’re really funny, and they seem really great," she says. "Then when they leave, someone else says to you, 'Oh, you realize that their whole family was exploded like two days ago.'"

The scrutiny that grief like Fleabag's invites has always intrigued Waller-Bridge. "In my experience you can’t be just grey and bleak about [grief] all the time. It’s just not a part of human nature, and I think being able to laugh at yourself and it and the absurdities of grief and pain is really cathartic," she says. "People relate to those moments when you go, 'I don’t understand why I’m feeling that. Someone farted, and it was funny but I’m supposed to be grieving. But it’s still funny. The fart is still funny.'"

No, Fleabag is not for the faint of heart, but the pitch-black Amazon series could have gone one shade darker — into black hole territory, perhaps. And when I ask her about what — if anything — lies beyond her comic boundaries, Waller-Bridge recounts a story about the run of the one-woman show that started it all.

In both the stage version that ran at London's Soho Theatre in 2013 and the onscreen version, Fleabag has a beloved pet guinea pig. In the stage version, Waller-Bridge and her director came to the conclusion that Fleabag "had to kill the thing that she loved," and thus, the guinea pig would have to die. "Um, I kind of crushed it to death with my bare hands," the actor says, somewhat sheepishly.

And the first rodent-murder turned into a spree throughout the play's run. "I killed that guinea pig in so many different ways," she remembers. One unspeakable method — which incorporated Fleabag's preoccupation with sex — lost the audience completely, and did not make the cut for the Amazon series. After the lights came up, Waller-Bridge recalls her mother coming up to her with some criticism."'Darling, I loved it. Absolutely fascinating, brilliant, so funny — don’t think you need the rape," she says, imitating her mother's posh accent. "'Don’t think you need the finger-rape of the guinea pig.'"

Fortunately for the creator's self-esteem, Fleabag has been embraced by audiences who are eating up this honesty and know — or are — women who may not be as extremely screwed up as Waller-Bridge's creation, but aren't stock rom-com characters either. It was a relief to her, because though Fleabag is definitely not autobiographical, "this is so personal to my sense of humor and my take on the world and what I think is funny."

That non-traditional storytelling style ought to help Waller-Bridge meet the demand for more episodes. If you've seen Fleabag, you know that the story comes to a major turning point at the end of Season 1, which also marks the conclusion of the theatrical version. The actor isn't quite sure where to go from here yet, but breathes a sigh of relief that Amazon is allowing "loads of time" to develop Season 2.

Editor's Note: The headline on this piece was updated in April 2019 to better reflect the content of the feature.