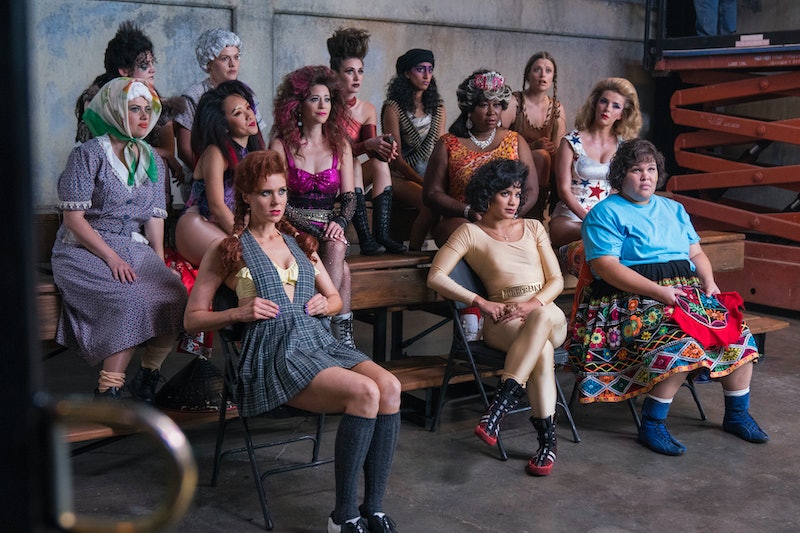 Hollywood has been forced into a reckoning in the past year with the rise of the #MeToo and Time's up movements; as a result, many films and TV series quickly course corrected and began telling more stories about women as a reaction to the sudden cultural shift. When fans queue up GLOW Season 2 on Netflix, an episode about sexual harassment will feel as though it was tailor made for the post-#MeToo era — though in reality, that wasn't exactly the case.

In an early Season 2 episode, Ruth (Alison Brie) finds herself in a honeypot situation with an older male TV executive, lured to his hotel room under the guise of discussing the future of her wrestling show but getting her dreams crushed when she realizes all he wants (and, horrifyingly, expects) is to sleep with her. This scene was totally written with Harvey Weinstein as the inspiration, you'll think while watching. But GLOW didn't have to use any headlines from the past year for writing inspiration to stay relevant, because the series' dedication to telling stories about underdogs and the underrepresented — something that Hollywood is only now beginning to prioritize — is baked in to its very premise.

"Something that is really interesting is we get asked a lot, 'Okay the Time's Up and #MeToo movements are happening now, what are you going to do to blah blah blah?'" GLOW star Britney Young, who plays Carmen "Machu Picchu" Wade, tells Bustle during a sit-down conversation at a recent Netflix event in Hollywood. "We aren't doing anything but telling real stories that women experience. That's something that is very important to our show. We're not trying to be fantastical, we're not trying to be confrontational; we are literally just saying that these are things that women go through. These are real stories and this is how some women handle them."

In fact, to prove the point that GLOW isn't reactionary and didn't create this honeypot episode as a response to #MeToo and Time's Up, Young points out that they filmed most of their season before the movements started to take shape. "Towards the tail of end of production, the Golden Globes and wearing all black, that was the last week of shooting for us," she says. "We've, interestingly enough, since Season 1 as a cast behind the scenes, have talked a lot about these issues, sitting in our cast chairs."

Jackie Tohn, who plays wrestler Melanie Rosen, loves how GLOW never tries to be topical. And yet the '80s period piece always seems to be anyway, because unfortunately, many of the same problems facing women in show business in the 1980s still very much exist.

"Thank god there is a #MeToo and a Time's Up movement, but were the movements not around right now, I don't think GLOW would be different," Tohn says. "I don't think these female writers and female directors and entirely female cast and female showrunners, they're not catering to a movement that is popular right now. We've got a show of 15 women and we need to tell their stories, and these are the things that happen to women. There also, thank goodness, happens to be a movement happening to get these women heard and to get these conversations started."

She then pauses for moment to think, and smiles before adding, "If GLOW got made five, 10, 12 years ago, these would be the same stories. People would have just called us 'edgy' instead of topical, but we're edgy anyway."

Young adds that because "the writers pull from their personal lives" as well as the cast members' personal lives, that's how they keep their stories so real and grounded and timeless. She then cites the important yet casual way GLOW told a story about abortion in the first season as a prime example of how their Netflix series tells female-driven truths.

Without spoiling what happens in the episode, Ruth's experience dealing with a lecherous older white male executive using his position of power to have sex with a younger female employee sparks an important conversation between the ladies (and males) at GLOW.

"These conversations are super important and it's a given that we should have been having them for, I was going to say 20 years, but come on, I mean since the dawn of time," Tohn says. "We're all excited to be part of something that's adding to the conversation and adding powerful, important female-driven dialogue to a conversation that thank god is finally happening."

GLOW may not be actively trying to be topical, but after watching the honeypot episode, viewers will hopefully be left with a desire to have more conversations about the sadly still persistent gender power imbalance in the workplace.

"Believe women, and if you are a woman in that situation, please know that there are sisters who are willing to stand beside you and get you to where you need to be so that doesn't happen," Young says of the lessons she hopes viewers take away from watching GLOW. "Trust in yourself and those people will come and find you."

Tohn adds, "A big part of our show is self-worth, value. Oftentimes it's the people who look the most confident are the people who are the most insecure. I think GLOW has taught me and I know it certainly has taught my fellow actors, we tell ourselves we can't do stuff and GLOW asks you to do it. And then you do it and then you go, 'Oh man, I've been telling myself a story of all the things I can't do for the last 20 years and now I know I can.' It's powerful."

She continues, "This show is microcosmic of what it's like to be a woman. It's such an accurate portrayal in so many ways, even if you don't wrestle or don't do sports of any kind. We want people watching to look at us and the show as a whole and learn that maybe they can do it too, maybe they can have a similar sisterhood and accept people, maybe they can get out of a honeypot situation, maybe they can wrestle. Ladies are powerful." That statement couldn't be more true, no matter the decade.