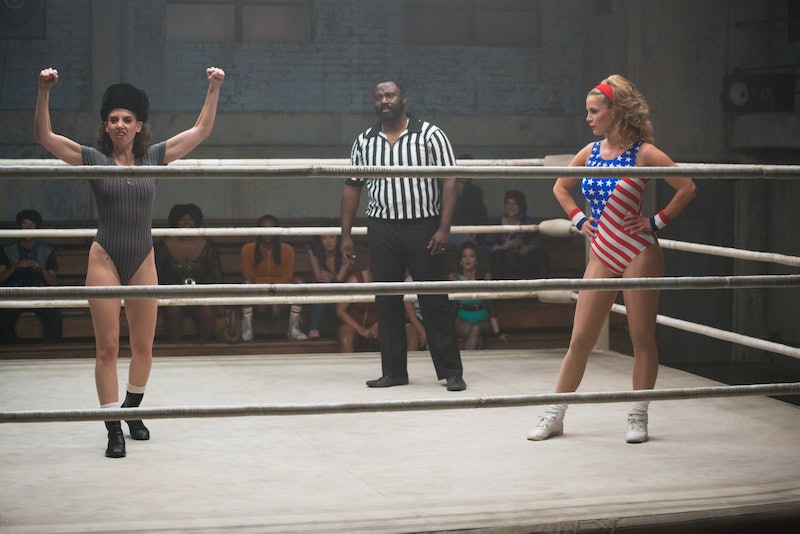 Not only is GLOW an empowering feminist comedy, but executive producer Jenji Kohan is a master of satire and effective sarcasm. As the show's ordinary women enter the ring, GLOW subverts cultural stereotypes with the women's wrestling personas. (There are spoilers for all of GLOW Season 1 ahead.) The show itself is actually a very good lesson in both how to tell a story using stereotypes, and how to not.

The ball starts rolling at Bash's impromptu costume party in Episode 3, where he proposes that the women choose their own personas and base them off of defining characteristics like race, hair color, and body. "Wrestling is not about backstory," he says. "It's about type." It's Ruth who is able to find some meaning in that concept. No matter what she does, people are going to see her as a homewrecker anyway, since she slept with Debbie's husband. She might as well use it to her own advantage.

So, while the women are given stereotypical characters to play, they ultimately lean into them and use those images to show the audience — at least the one watching on Netflix — how ridiculous they are in the first place. One of the better examples is Tamee's ring character. "Welfare Queen" from Chicago is a black "ghetto" stereotype, but it's taken so far over the top (shoving food stamps into her opponent's mouth) that it challenges the audience's expectation.

In Episode 9, Bash and the women subvert stereotypes in another way. To raise money, he takes them to his mother's fundraiser, and they all lean into various stereotypes about crack addicts in order to get Bash's mother and her rich friends to support their show.

That said, I would argue that Sam's questionable pilot in Episode 3 uses stereotypes in a negative way. The idea that wrestling uses very basic concepts of good and evil to tell a compelling story is essential, but his proposed plot for Gorgeous Ladies Of Wrestling had the women in catfights over a man, taunted by two lesbian demons. That's more harmful than humorous, and a difficult balance to pull off. Even the way he describes the personas as commentary on an existing stereotype is not quite right. He's on the right track, but it's better when the women control the narrative.

In the final episode, when they finally shoot the show in front of a live audience, some matches are between different countries. Others "pit" beauty against brains or brawn. I think Arthie, who plays a Lebanese terrorist character named Beirut in the ring, is the most freaked out by the stereotype she has to play and the hate that she inspires. That will hopefully be explored more in GLOW Season 2. Again, some of these subversions work for the period, but all of them are for us watching at home.

The original G.L.O.W. series included broad characters like the Southern Belle, Aunt Kitty, the Farmer's Daughter, and Little Egypt — so this is accurate to the time period. GLOW on Netflix uses that dated practice to its own advantage. It's not just saying "look how offensive this is," it's saying "look how over the top, ridiculous, and untrue this is." That's the key, I think, along with letting the women be in charge of owning their own story. GLOW shows how easy and rewarding that can be.