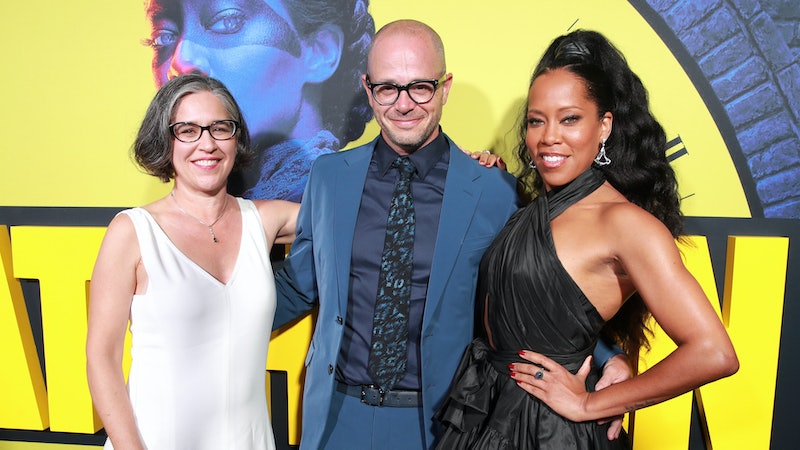 How do you adapt one of the most beloved graphic novels of all time, a dense tome of antiheroes, alternate history, vast conspiracies, doomsday clocks, and giant alien squid? If you're Watchmen director Nicole Kassell and creator Damon Lindelof, you don't. Instead, you "remix" the source material rather than adapting it slavishly. Zach Snyder already attempted a panel-by-panel translation of Alan Moore and Dave Gibbons in 2009, to mixed results. Instead of repeating Snyder's tactic, Lindelof and Kassell decided to shake things up dramatically, delivering a new take on the classic.

"I see The Conformist, I see Children Of Men, Blade Runner, and a Rihanna music video," Kassell tells Bustle about her reaction to reading Lindelof's script for the first time. "Oh, and of course The Remains Of The Day." If you're curious what the works of Bernardo Bertolucci, Alfonso Cuarón, Ridley Scott, and James Ivory do with each other — not to mention Rihanna — and how that combination of influences could possibly create a cohesive whole, you'll have to tune in to the show's pilot, a bold vision of a world where Robert Redford has been President for three decades, squid rain from the sky, and cops wear masks to protect their identities from terrorists.

The boldness of the vision is even more striking when you consider that Kassell (who helmed the first two episodes of the new series and also serves as an executive producer) had never read the graphic novel — or seen Snyder's adaptation — before signing on to the project. "When I heard after Leftovers that Damon's next project would be Watchmen, because he was doing it, I knew I would want to be a part of it."

Kassell and Lindelof had worked together on two episodes of The Leftovers, with Kassell directing two of the HBO show's most acclaimed hours, the Matt Jamison-centric "No Room At The Inn" and "It's A Matt, Matt, Matt, Matt World." (Kassell has also worked on a number of other prestige series, including Westworld, The Americans, Castle Rock, Better Call Saul, American Crime, and The Killing.)

I never did see the movie, because I didn't want to accidentally borrow from it.

"Once he got closer to being ready to hire for the pilot, I finally called and said, 'I would love to be involved. I don't know it, I haven't read it, but if you're doing it, I want to do it,'" Kassell remembers. "And then, because he's such a fan of Watchmen and it's in his DNA, I decided, let me read the scripts first so I have a really unfiltered, objective reaction to his story, regardless of what it may be for people who know the story." Those written words were what gave Kassell such an eclectic mix of influences for the look and tone series, all of which come through in unexpected ways throughout the first two episodes.

After joining the project, Kassell finally plunged headfirst into Moore's and Gibbon's graphic novel, doing "a deep, deep dive on the book in order to honor it and take very, very seriously adapting this material, which is so special to so many people," she says. "I never did see the movie, because I didn't want to accidentally borrow from it."

Kassell looked to the pages, not hoping to recreate them with slavish devotion, but looking for inspiration to help craft a visual language for the show that would familiar to Watchmen readers. "The look [of the show] was definitely heavily inspired by the graphic design of the book," Kassell says, particularly the use of vertical panels, which are common in comics but not on television. That proved to be a unique challenge for the creative team: "How do you find a vertical in a horizontal frame?" Kassell ended up employing a variety of techniques, including "obscuring the frame and frames within frames. Also, "transitions were enormous. A lot of attention was given to these graphic cuts from one image to the next by having your eye in the same place of the frame from one take to the next."

We wrote a book, a very technical 50-page book on the rules of this world, and that defined the parameters for what props should be made from and all of that.

But the biggest challenge for Kassell and the production team wasn't just translating the feel of reading a graphic novel to the screen, but conjuring an entire universe that looks and feels like almost like ours… but not quite. "To create an alternate universe is as challenging as doing a period film," Kassell asserts. "You have to set the rules of this place. I have to know how things work in reality. This is a world where Redford has been President for over 30 years, so climate change is not an issue; there's no plastic, their cars are electric, there are dirigibles in the sky. People are still reading paper, so paper should be in every set, whether it's books, magazines, journals. To set those rules — what are clothes made of? — we wrote a book, a very technical 50-page book on the rules of this world, and that defined the parameters for what props should be made from and all of that."

Kassell refers to this process as a "true collaboration" with Lindelof, a showrunner infamous for his secretive, mystery-laden storytelling. But even though she only sat in the director's chair for the first two episodes of a show that will likely take its time unfurling its mysteries, Kassell wasn't kept in the dark. "Basically anything I wanted to know, I knew as much as [Lindelof] knew," she affirms. "I was one of the secret keepers." Still, don't try to pry any of those secrets out of her. She's content to wait and let the viewers discover the answers for themselves. She says, "My only hope is that Watchmen will spark conversation."