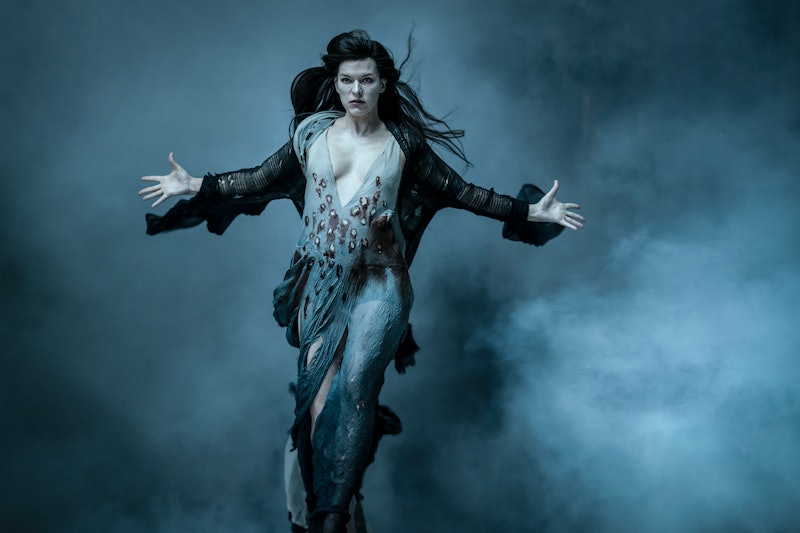 It's been a hot second since action fans have seen genre queen Milla Jovovich eliminate zombie scum as Alice in the Resident Evil series. After the Resident Evil: The Final Chapter in 2016, and the actor wasn't sure that there was another project out there that would leverage her training and expertise. As it turns out, all she had to do was go bad. In the Hellboy reboot, Milla Jovovich found the role she was looking for. In this one, she's abandoned her guns and ammo for black magic as she turns to the dark side to play the villainous, hell-raising role of sorceress Nimue.

"At that point, when they brought the script to me, I was wondering what I would do after Resident Evil since that franchise has come to an end, and I was a little bit sad," explains the actor, speaking over the phone. "I’ve learned so much since The Fifth Element. I’ve had so much experience doing action, what am I going to do now? I have all this information in my brain, and all this experience, so what can I do with it if I don’t do action movies?"

Hellboy, which premieres in theaters on April 12, presented her the perfect opportunity, not only as a fan of action as a genre, but also of sci-fi and fantasy.

"I grew up in the ‘80s, and when I got home from school I’d watch She-Ra and the Princess of Power. I grew up with the Terminator movies, and Alien films, so I always was confused as to why there weren’t more women doing action. It seemed to be a male-driven genre," Jovovich says. "When I did The Fifth Element, I realized [sci-fi] really excites me. I love playing in movies where you have bigger-than-life characters, fantastical worlds. It’s something you never deal with in real life, and then you’re able to escape into these fantastic worlds or live in them a little bit, and that always excites me. "

The Hellboy reboot is a totally different take on the graphic novels by Mike Mignola from the Guillermo del Toro movies of 2004 and 2008. Under the direction of Neil Marshall and featuring a whole new cast, this 2019 rendition reintroduces us to Hellboy (David Harbour) — with an emphasis on his dilemma as a supernatural being raised by a human (Professor Broom, played by Ian McShane), and living in a human society. In the film, one of Hellboy's long-time demon nemeses, a pig-like creature called Gruagach (Stephen Graham), summons the Blood Queen Nimue (Jovovich) in an attempt to get his revenge on the horned hero. But unknown to Gruagach is the apocalyptic prophecy that's about to come true with the queen's rise.

"There’s so much going on when you play a villain. There’s such a rich history with bad guys," Jovovich says of taking on the role of the antagonist. She further explains that she wasn't just attracted to the idea of being the "bad guy." Beyond that, the character of Nimue specifically spoke to Jovovich because of her complexity. "I think the Blood Queen is such a layered character. She had noble ideals about joining the humans and the monsters to live in this peaceful world together, and then she gets betrayed by King Arthur," she says. "I just thought it was really great to show her good side, as well as her vengeful side."

And while Jovovich draws a lot from her experience in otherworldly action films, playing Nimue also involved exploring new facets of her acting chops that she'd never really explored before. She took classes with a dialect coach to perfect her English accent, and she says that playing the sorceress also allowed her to channel a powerful, yet "feminine, and ghostly, and glamorous" character.

Spoilers ahead! In addition, Jovovich got a chance to do a glorious monologue. It was her favorite Hellboy scene to shoot, and she was blasting some classic AC/DC, with epic guitar solos, to pump her up for it. "I hadn’t done a big rousing speech since Joan of Arc [1999], so I was into it," the actor says. "Getting the troops ready for battle!"

Whether Jovovich will be returning for a potential sequel to the reboot is doubtful, given that things don't exactly end well for Nimue. "Who knows? Maybe her head’s just floating, waiting for someone to find it again. But, I don’t know. That would be fun!" End spoilers.

But this is definitely not the last we've seen of the actor in an action-packed, supernatural setting. Her upcoming project Monster Hunter, much like Resident Evil, is based on a video game and features Jovovich in the lead role. And while that's something to look forward to in 2020, Jovovich's epic performance as the sinister Nimue, though it's a role very much different than anything she's ever done, will definitely satisfy her genre-loving fans.