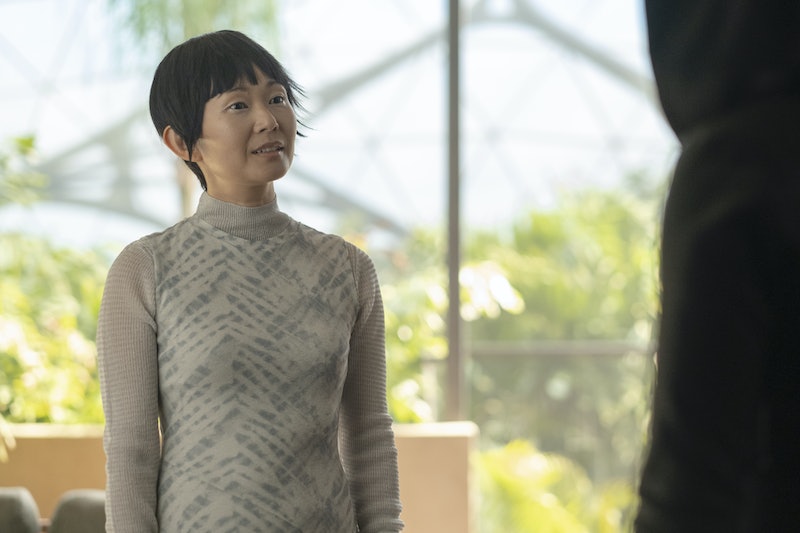 The world of Watchmen is already populated with larger-than-life characters — literally, in the case of the size-changing Dr. Manhattan. But the fourth episode of the HBO series added yet another: Lady Trieu, who joins Watchmen in the flesh at long last, after being whispered about in hushed and ominous tones for several episodes. The CEO of shadow Trieu Industries — which bought out Veidt Enterprises after the disappearance of Adrian Veidt, aka Ozymandias — is played by Golden Globe nominee Hong Chau (Big Little Lies, Homecoming), and she makes an instant impression with her eerie demeanor and eccentric wardrobe.

"For my character, I drew a lot of inspiration from real-life tech billionaires like Mark Zuckerberg or Elon Musk or Richard Branson," Chau tells Bustle about the process of bringing Lady Trieu to life. Obviously, those three names have something in common that Lady Trieu does not share. "Seeing as they're all men and my character is not, it was very refreshing for me, even as an audience member or a person reading the script, to see somebody who is really trying to move society and culture in a way that is not just immediate to her — which is how we often see female characters who are effective: it's usually smaller in scope and not on a larger, more powerful scale. So it was really fun to get to play and take responsibility for a character like this."

But what is it like playing one of the most mysterious characters on one of television's most mysterious shows? How do you even begin to build a character that's so shrouded in secrecy? "Some of the other actors said that they didn't want Damon [Lindelof, Watchmen creator] to tell them anything and they were just going to take it moment-to-moment," Chau revealed. "But I just felt like for Lady Trieu, it was the type of character where I needed to know everything in advance, because she's so premeditated and everything that she does has been thought out, so I felt like I needed to approach the character in that way as well."

To that end, Lindelof filled Chau in on her character's whole journey, from beginning to end, at their very first meeting. That was also the meeting at which the showrunner explained the entire sprawling universe of Watchmen to the uninitiated actor. "I was not familiar with the graphic novel at all, I had not seen the movie," Chau confesses. "I just got a call that Damon wanted to meet with me for the show. I didn't know what the character was or anything. At our first meeting, he explained the entire graphic novel; it actually didn't take very long at all, maybe like 45 minutes or something like that, and then the next 45 minutes he took me through the overall arc of the show and how Lady Trieu fits into that. It was a lot of information." Sounds like an understatement.

Undaunted by the info dump, Chau dove headfirst into the scripts, which she says are just as captivating on the page as they are onscreen. "Damon Lindelof has a singular voice as a writer," she praises. "His scripts are so fun to read, and he's so smart. I love being able to read a script that feels like I'm sitting across from the person who wrote it, because I read a lot of screenplays and they are not like that. A lot of them are very sort of instructional and dull and they don't really have a life to them, so you have to bring a lot as an actor to them. This was refreshing in that I felt like I understood the tone of the show immediately."

How would she describe that singular tone? "There's an intelligence there, and it's got a lot of empathy and humanism — but it's not sappy, it's not sentimental, and I appreciate that. I appreciate that he created these characters… a lot of them are characters and people that you don't often get to see in these particular archetypes." Such as a female tech billionaire, for instance — or a protagonist on a superhero show who's a black woman in her 40s, or a former vigilante who now "eats good guys for breakfast" when she's not telling her godlike ex-boyfriend jokes over the phone.

When it came time to actually start transforming Lady Trieu from lines on a page to a living, breathing person, Chau enjoyed a collaborative process with the Watchmen team. "Working with Meghan Kasperlik, the costume designer on the show, was a really cool experience," she recounts. "The costumes that she came up with are so wild and they really informed by character and how I carried myself. And also hair and makeup; [Trieu] looks completely different from me in real life or how people often see me, so it was just fun to play something different and kind of off-the-wall."

Outward appearances are very important to Lady Trieu, who is building a giant "Millennium Clock" in the middle of rural Oklahoma for unknown purposes, and who cons a couple out of their home with venomous sweetness in the episode's opening scene. Her eccentric wardrobe and well-maintained exterior are crucial to maintaining that aura of mystery and authority. "That was the fun thing for me: Lady Trieu, at least appearance-wise, is so pristine and calculated, and I wanted to uncover, what are the indecent or messy parts of her. That is something that we'll see as the season continues," Chau teases.

What else can she tease about Trieu and her very opaque motives? Not much, at this point — although she's quick to encourage viewers not to write the character off as a villain quite yet. "What I appreciate about this show is its embrace of grey areas," Chau says. "I don't think any of the characters are 'good' or 'bad'; they hold qualities of both in each of them. That's how it is in life, and I'm glad that Damon had the skill and dexterity to write characters that feel true to life, even though it's set in this really bonkers universe."

"Is [Lady Trieu] a hero or a villain? I don't know, that's up to the individual viewer's perception, and the scales will be tipped in one way or the other based on different things that she does," Chau promises. "But I can promise you that it will be very entertaining and fun."