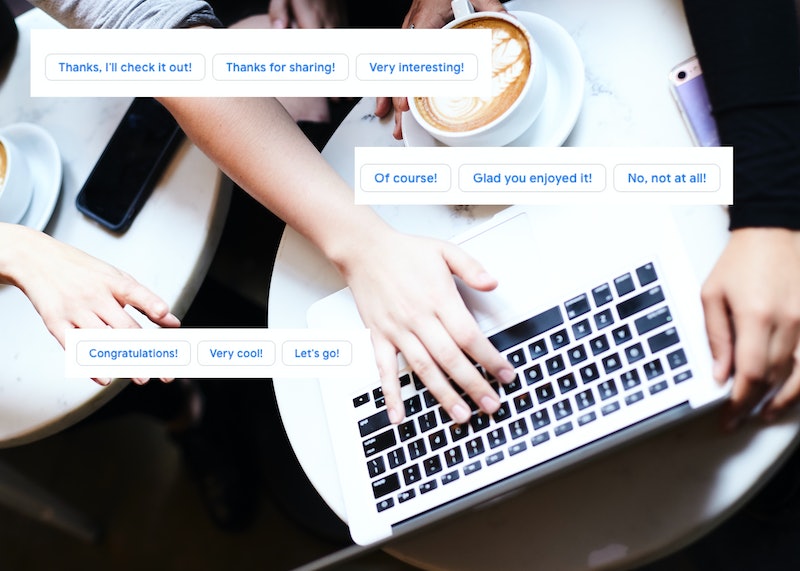 Picture this. You work at the computer. (OK, you’re probably reading this while you’re at work, on the computer, so you know the drill.) Out of the corner of your eye while you’re scrolling through Twitter, you notice the number of unread emails creeping higher and higher in the left-most tab of your preferred internet browser. (Because that is the only acceptable place for your Gmail tab to live, right?) How, you wonder, are you going to deal with all of these emails, especially the horrible ones that require a one-word response just to let the sender know you got it?

Yes, it may be unsettling that a robot is reading through your emails to suggest something that’s legitimately helpful. Yes, it’d probably be good if we made even a cursory effort to stave off the inevitable presence of AI in every single one of our daily processes. But do I feel less “authentic" in my professional emailing (??) because I click on the automatically generated “Great, thanks!” response of typing the phrase out? Absolutely not.

A casual search through Twitter reveals that even among people who admit to using these responses, there’s a sense of shame around doing so.

“[C]onfession: I have been using the gmail canned responses...and I feel like a serial killer,” writer Aminatou Sow tweeted on Oct. 3. “I've started using those 'suggested responses' on Gmail due to sheer laziness and hate myself a lil bit,” writer Emma Gannon tweeted in September. Even before the auto responses were made available for the web version of Gmail, people were complaining about them: “The decline of English civilisation [sic], part 765,” political commentator John Harris tweeted in September 2017, in response to an auto response in Gmail’s mobile app that suggested, “No worries, thanks for the heads up!” might be an acceptable response to an email.

My (positive) feelings towards these controversial auto responses are thus:

Does my unabashed love for the Smart Replies make me a bad person? Not in and of itself. And anyway, if you are so bothered by the idea of making things easier for yourself, you actually don’t have to use them! (Would it be good if you could turn Smart Replies off in the web version of Gmail, the way you can in the app? Probably, but here we are.) You still have the full ability to type out whatever response you like, customize it with whatever emojis you please, and send it out into the ether. Your choice!

Obviously, the system isn’t perfect. It’s easy to laugh at some of the goofier or tone-deaf responses, since they were generated by AI (“What's wrong?”), and the system doesn’t yet autogenerate a polite way of saying, “Please get out of my inbox.” But overall, it’s not a bad solution to a problem most people never thought they’d had an issue with until it was no longer an issue. So, to the Smart Reply haters, I say the future of emailing is here, baby. Lean in.

More like this
20 Smart Devices Under $35 That’ll Change The Entire Vibe Of Your Home
By Emma Carey
Behind The Hilarity Of The "POV: You Walk Into My Room" TikTok Trend
By Lexi Inks
How To Turn Off Night Mode On Your iPhone Camera
By Emma Carey
26 Ghost Story Podcasts To Get You Ready For Halloween
By Jessica Booth, Mia Mercado, JR Thorpe and Emma Carey
Get Even More From Bustle — Sign Up For The Newsletter