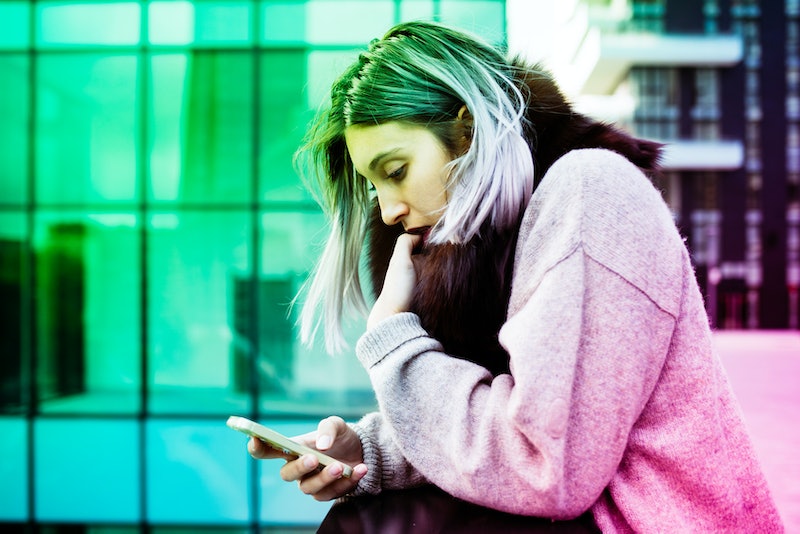 Even though dating apps are most popular among millennials, according to a recent Bustle survey with dating app Happn of over 1,000 dating app users, 78 percent of women and 85 percent of men still want to meet people IRL. That's why for the second year in a row, Bustle is deeming April, "App-less April" and encouraging our staff and readers to delete their dating apps for 30 days and meet people the old-fashioned way: offline. With participants tracking their progress and tricks and tips from dating experts, we'll be helping you feel empowered to meet people IRL all month long. Today's topic: Camille Virginia, offline dating expert and coach, shares why she tells her clients to delete their apps.

My client Maria was sharing why she cut things off a guy, before they even met up.

Maria's experience is one of dozens of the same that I've heard from my single female clients. Which makes me think: when did it become socially acceptable to send awful messages, like fat-shaming comments or graphic pictures, to total strangers? And why are people doing it? The short answer: because they can.

Dating apps encourage bad behavior. A 2016 Consumers' Research report found that 57 percent of women report feeling harassed online, and a 2015 OnePoll survey of 973 dating app users found that 7 in 10 women on the leading swiping app have received sexually explicit messages or images. It's one of many reasons I ask my clients to get off of them for awhile so we can instead turn their focus to meeting people in the real world.

What's worse is that behaving badly on apps has some serious unexpected consequences for the offenders, which no one is talking about.

Sending sexual pictures or harsh comments to someone is just bad dating karma, and totally against the Golden Rule. Because honestly, we all know better than to do stuff we wouldn't want done to us. That karma is going to come back at some point— and if you've been sending anything other than kind (or at least neutral) messages to other people, you can bet it ain't gonna be pretty.

The seemingly "endless pool" of singles on dating apps is going to cause some people to continually pass-up others who'd make amazing life partners. Forever. People who swipe endlessly might feel like they're "putting themselves out there," simply waiting for the perfect person to come along.

But 40 years from now that "waiting for something better" mindset will have created a population of elderly singles who are still swiping (or the future equivalent), wondering why — after spending decades of their life on dating apps — they still haven’t found "The One".

If that last image isn’t scary enough, the third consequence of behaving badly on dating apps is even more disturbing. It's called ethical erosion, and it usually starts with a small and seemingly harmless action in one area of life —like, sending sexual solicitations to women on dating apps. However, the line between technology and real life can quickly start to blur — and those solicitations that were once saved just for text can soon be coming out of the person's mouth to the woman standing in front of them. Yikes.

If you're taking Bustle's App-less April challenge to delete your dating apps for 30 days and focus on meeting people IRL, take heart knowing you don't have to deal with any of the above for awhile and instead use this time to start connecting with people in the real world. That could mean making a new friend in line at the grocery store, flirting with the barista at Starbucks, or creating a brief but meaningful moment with an elderly person on a park bench.

The next time you think to yourself "I love that woman's red scarf," say it out loud to her without hesitation. Or ask how someone's day is going when you step on the elevator with them. Or flash a genuine smile to someone who looks like they could really use it.

Interacting in-person makes people step up their game to be on their best behavior, which is a win-win for everyone involved. Because adding a small barrier to a situation — like the risk of rejection in a public setting — instantly separates those who truly want something (and are willing to go for it) from those who didn’t really want or value it in the first place. And deleting your apps can be just the push you need to start engaging like that IRL.

If you do go back on dating apps after App-less April, the next time you get a rude message, try to do a reframe on your reaction: channel any initial hurt feelings or anger into compassion for the offender. Because chances are, they likely have some serious repercussions coming their way in the not-so-distant future. Then turn to the person next to you on the bus, who smiled when you first sat down, and say "Hi! How's your day going?".

Camille Virginia is an offline dating expert and coach. You can get her FREE gift The Ultimate Guide to Turning a Chance Encounter into an Epic First Date! here.