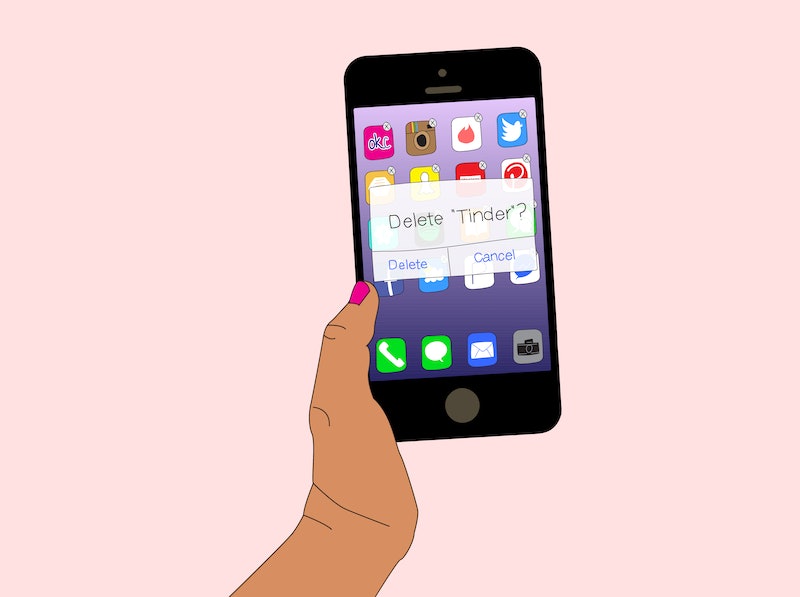 I deleted my dating apps a few weeks ago as part of Bustle's App-less April challenge. I started the month-long challenge after I realized my dating apps were no longer supplements to meeting people in real life — they were the only way I was meeting people. In an effort to make more IRL connections and see what the dating scene was like offline, I ditched the dating tools I had been using for three years and encouraged coworkers and friends to join me. So what's happened in the last two weeks since I broke my addiction? I'm happy to report I didn't suffer from headaches, a fever, or anxiety. In fact, I feel kind of relieved.

Deleting my dating apps has removed the weight my phone used to carry (both in terms of data storage and in my mind). My phone is no longer a source of stress. When I see my phone sitting on my desk, I don't think about notifications, how many potential matches I'll have to go through on the apps that give you a set amount per day, or why the hot guy on Bumble didn't answer my message. Instead, my phone is actually kind of a bore.

Long train rides feel longer and the time in between getting in bed and actually going to bed is much shorter. What did I do on there before dating apps? I've found myself texting my friends, people who I know IRL, a lot more. Oh, and Snapchat. (Still don't really get it but I've definitely spent more time snapping people who carry mattresses on the subway). While I do feel a void entertainment-wise, there are a few things that make me feel liberated from this challenge. But the number one thing I don't miss about dating apps? It isn't people not messaging, dropping off in the middle of conversations, or the endless pool of people that never quite feels satisfying.

It's the unpleasant messages.

Sexually aggressive messages, copy and pasted messages, and the general WTF DID YOU REALLY JUST SEND THAT? ones. After three years of being on dating apps, those screenshot-worthy messages got old quickly — and not just because they lost their novelty. They were actually affecting my mood, attitude about dating, and self-esteem, whether I realized it at the time or not.

"If you're flooded with a lot of unwanted messages full of gross content, aggressive messages, or a nasty response to something you have sent, dating can feel pointless and we can feel hopeless about finding a partner," Janna Koretz, Psy.D, licensed psychologist and founder of Azimuth Psychological. "Simultaneously, it can make us feel like something is wrong with us, and perhaps if we were more *insert positive adjective here*, we would be doing better in the dating game."

And it's not just the aggressive messages that were bothering me — it was the irrelevant ones too — the copy and pasted ones or the ones that didn't pertain to me. They made me feel more and more like I was disposable. I was becoming Michelle, 29, Lower East Side, a woman with brown hair who likes pizza and puns.

"It chips away at someone's good mood or worsens an already bad mood," Erika Martinez, Psy.D, Licensed Psychologist tells Bustle. "It's even possible for someone's self-esteem to diminish after receiving many such messages, particularly if they're using these apps frequently to feel attractive, desired, or validated by others. They end up feeling disillusioned, disheartened, and objectified."

So how can you avoid feeling like this if you're an online dater? "Checking-in with yourself before mindlessly checking app messages would be a good idea." Martinez says. "If you're feeling particularly vulnerable, then maybe it's better to delay reading messages. Instead, it'd be better to wait until you're feeling emotionally hardy and resilient."

But I'm not alone in feeling uncomfortable by all of the sh*tty messages from strangers. A survey by Consumers' Research found that 57 percent of women report feeling harassed online, with Tinder and OkCupid being the top culprits.

That being said, there are trends that show dating apps are trying to make the space safer for women. Apps are rewarding users for good behavior with special badges and even providing flakiness ratings for your matches. More and more apps like Bumble and Siren are popping up, where women are in control of the conversation. Women are stepping into top roles at these companies, too. "Women receive 4X as many messages, connections, and contact as men do — and what happens then is it becomes a chore. It's no longer fun," Alexandra Chong, the new President of Badoo, tells Bustle. "The space is definitely recognizing that women need to be behind these companies because we're more than 50 percent of these audiences."

It's encouraging to see this. Even though I'm off apps now, I don't know yet if I'll get back on once the challenge is over. After all, among the WTF messages, you do get a solid one every now and then.