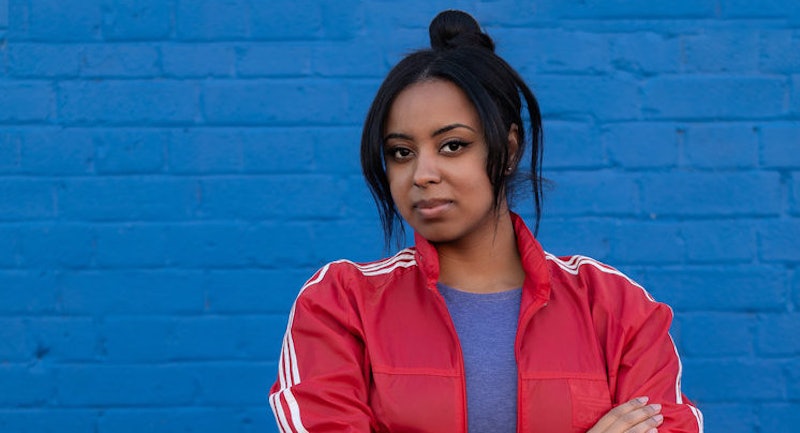 If I say the word “parliament” what do you picture? Apart from Big Ben, for many people it probably conjures up an image of middle and upper class white men in suits shouting at each other as they make the decisions that shape the society we live in. I’m of mixed-heritage — my mother is Punjabi Indian and my dad is Congolese. Before I started working there, my expectations of Parliament's diversity were pretty low. I definitely wasn’t expecting to meet many people like me.

Since 2018, a family-run platform called Mixedracefaces has been giving a voice to mixed-race people, as well as offering them the unique experience of exploring their identity with others like them at events. Mixedracefaces uses a mix of photography and storytelling to showcase the lives and identities of mixed-race people from around the world. As with most things these days, I stumbled across the platform on Instagram. Soon after, I arranged to meet its creators Solon, Rachael, and Tenee Attoh to document my racial identity in March last year. I found the experience pretty liberating.

So what better place to take the Mixedracefaces project than Parliament? There are few institutions that are as old-school and, let’s be honest, it’s a place that was initially built for middle-aged wealthy white men to occupy. Even now politics remains visibly hostile to people of colour — for example black and asian female MPs receive 35% more abusive tweets than any other MPs. A recent internal report by ParliReach, a workplace equality network in Parliament, recently found that BAME (black, asian, and minority ethnicity) staff in Parliament feel that their competency and seniority is often questioned and that overtly racist behaviour is common. So it seemed like the perfect place to try and uncover the hidden stories of mixed-heritage people and amplify their voices.

We found 12 staff members from different teams across Parliament- including two MPs. Each participant wrote out their own personal reflection on different elements of being mixed and how they feel it’s impacted their lives. One thing that struck me was the diversity of heritages and experiences. It really proved that there’s no single way to be mixed-race.

The tendency for people to push mixed-race or mixed-heritage people into a single box and minimise our identity is a common experience. One of the participants Lameesa Nelson, who is St Lucian and Bengali and works in the parliamentary security department, describes an incident that took place outside of Parliament. She says, “ I had an argument once with a man who insisted I was Somalian and refused to believe I wasn’t. He tried to speak to me in Somalian and I said I didn’t understand him. He didn’t believe that I was mixed.”

Some of our participants were not visibly of mixed heritage, but still felt strong connections to their various cultural identities. They often feared they would be challenged if they identified as mixed, or experienced pressure to “prove it” to others. The anxiety of not being able to be who you are without being questioned is horrible. In the past, I’ve had people compare their skin colour to mine and insist I can’t be mixed because I’m not light-skinned enough. It demonstrates a total lack of recognition that heritage is more about the cultures that make you up than your perceived racial appearance.

One of the other participants in the project was Elmira Pinat, who is Indonesian and Filipino and works in the parliamentary digital service. She was enthusiastic about the project but had some confusing reactions from fellow staff members. She explains: "Some colleagues were like 'but you’re not mixed race' and I had to explain that I was of mixed heritage and [tell] my whole story to them to help them to understand. They thought being Indonesian and Filipino was the same thing." But she says that comments like these make the project even more important. “It demonstrates why we need to hear these stories. It creates a dialogue about issues we’d not normally talk about. It sparks that conversation.”

As well as educating those not of mixed heritage, these conversations are important for people who are of mixed heritage but have never had a space in which to discuss their experiences. The sense of community the project created for our participants was one of the most rewarding results. Nelson found hearing other people’s mixed stories really interesting, as “everyone’s stories had similarities but also were unique [...] one girl had a rainbow family where everyone was mixed which I really related to, yet in other ways her story was also totally different. It was good to hear stories from others and be reassured there are others like you here.”

The complexity of mixed-race identities increases even more when you take into account that many mixed-heritage people in the UK live in a country that neither of their parents are from. I recently found out the term for this is a “third-culture kid”. Where is home for "third-culture kids" or anyone mixed? Elmira lived in Indonesia for a year but found that “even there I was a foreigner. I didn’t speak the language fluently and they called me English. But then some English people here wouldn’t see me as English either, so what am I? That’s challenge of not really belonging anywhere”. Similarly Lameesa wasn’t raised in either of her ethnic origin countries. She says: “being born and raised in Britain is what’s made me. Despite the difficult history between Britain and people of colour, I’m not embarrassed to say I’m British and I love being from London.”

We wanted to reflect the diversity of Parliament at all levels, which is why it was important to have some mixed heritage MPs take part as well. Labour MP Clive Lewis who's English and Grenadian echoed Elmira's thoughts on on the concept of home. He said: “If you are mixed you never quite fit into either culture — there’s always a sense that you never quite belong anywhere. But there’s a richness of having more than one culture that outweighs any negatives.” He also pointed out something I was extremely ignorant of: “The concept of race is a political construct, a pseudo scientific term for Europeans to justify why they enslaved and colonised vast part of the world. Language is powerful, it’s a frame through which you see the world. [We shouldn’t be] using the language of division to describe to ourselves”. Even as a mixed-heritage person, I’m constantly learning more from these kinds of conversations.

It’s been revealing to find out that, despite many things needing to change in this creaky old institution, if you do some exploring, Parliament is more diverse than you might think. Nelson explains she assumed “it would be full of posh white people." She continues: "Not saying this place is perfect — at the top it’s still overwhelmingly white men, but I was completely thrown. It was much more diverse than I imagined it would be." Pinat agrees, adding: “when an organisation is more diverse there’s strength in it. If [Parliament] wants to progress and get talent and new ideas, we have to believe in the strength and power of diversity.”

So, what can we hope for in Parliament as a result of this collaboration? I’ve thought a lot about why there's so much power in individual stories. Not everyone is of mixed-heritage, but everyone at some point asks themselves the question: Who am I? The search for an identity is something we can all relate to. The current social and political climate is tough and, at times, very ugly. But as Nelson puts it: “for people who feel like they don’t fit in, I hope they will look at this and feel good. Parliament has done this project by choice and hopefully that shows that they are trying to progress.” For me personally, I hope this will be the start of a more open dialogue in Parliament and a continued effort to embrace diversity in its many different forms — one story at a time.

More like this
Deliveroo Is Selling Lotus Biscoff Cinnabons Now
By Darshita Goyal
The Queen’s Cause Of Death May Not Be Formally Announced
By Shahed Ezaydi and Catharina Cheung
Will Archie & Lilibet Attend The Queen's Funeral?
By Sam Ramsden
Women Around The World Are Cutting Their Hair In Solidarity With Mahsa Amini
By Darshita Goyal
Get The Very Best Of Bustle/UK