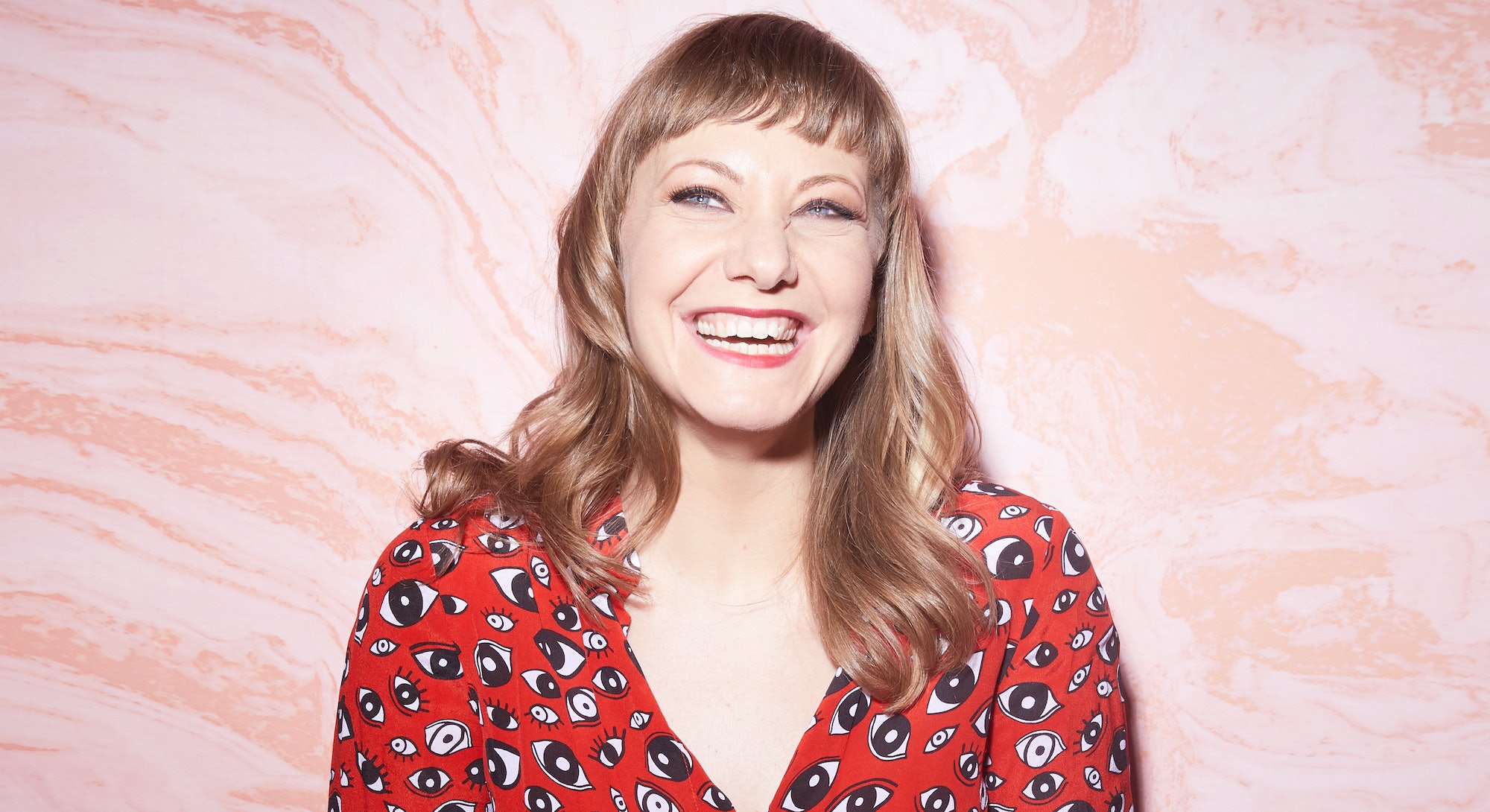 Author, producer, and screenwriter Emily V. Gordon is responsible for some seriously funny TV shows and films, from The Carmichael Show (she wrote for it) to The Meltdown with Jonah and Kumail (she co-created it) to this summer's breakout indie dramedy, The Big Sick (she co-wrote it with real-life husband Kumail Nanjiani and provided the inspiration for its leading lady). The new film, in theaters now, tells the true story of Gordon's obstacle-filled romance with Nanjiani (who plays himself; Zoe Kazan plays Gordon), which saw the couple struggle with both the disapproval of their parents and Gordon going into a coma due to a life-threatening illness, adult-onset Still's disease.

Thankfully, Gordon is managing the disease she contracted 10 years ago, a rare inflammatory condition that, when left untreated (like hers was) can lead to organ shutdown. But that doesn't mean she's done talking about it. Here's why the writer chose to turn the most harrowing and intimate experience of her life into a comedic movie — one produced by Judd Apatow, no less — as told to Associate Movies Editor Rachel Simon for Bustle's Comedy IRL Package.

I was raised on gallows humor. My family is very into bleak, dark humor, and I think the best kinds of laughs come out of torment and out of trauma. During the actual experience [of being sick], there were a lot of times where we just ended up laughing hysterically, so I feel like making the story of my falling into a coma into a drama would’ve been heavy-handed. So of course, the story of how Kumail and I came together needed to be a comedy.

For both Kumail and myself, and all the people that we were paired with to make the movie, comedy’s just what we were most well-versed in, and so any kind of story I tell, no matter what, it’s always gonna have a comedic bent to it.

That doesn't mean it was easy to write, though. It's nerve-wracking to share something so personal. This experience now, talking about it, has definitely been something to adapt to, and sometimes I feel a little overexposed and a little vulnerable.

But for all those worries, I also have met so many amazing people who have similar stories. I had a woman come up to me and say, "Hey, I had the same diagnosis," and we just started hugging. My career has always been — as a therapist early on and now as a writer — based on helping people feel less alone. And if this movie can do that for people, I think that outweighs the vulnerability that I end up feeling sometimes when people are like, "Hey, how’s your blood doing? Have you been in any comas lately?"

All that stuff is balanced out by, hopefully, the idea that this story can resonate with other people.

Still, it took a lot of time to figure out the best way to tell our story.

When we wrote the script, there were so many different versions. In real life, for instance, my parents were mostly just focused on my care, and my dad never cheated on my mom, ever, ever, ever. And also, in reality, apparently I fought quite heavily when they were trying to put me under, which is pretty intense and something I don’t remember, but Kumail very much remembers, so several drafts of the movie had a version where I was fighting that. But Judd Apatow’s really great about encouraging us to put everything down, and then he and our other producer Barry Mendel would help us pick and choose what ended up being best for the story. We definitely were very aware of not wanting to show Emily on the respirator all the time, because it could feel a little manipulative, like, "you keep showing us this girl to try to get us to feel something."

We didn't want that.

As I was writing all these drafts, I got a new perspective on being sick and what it meant for my family. When it first happened, obviously there was a lot of processing, understanding what had happened to me, and realizing, oh my god, I could've died, and reshuffling my life.

And writing the script, I started to see things from my parents' and Kumail’s perspective, because I had been so focused on my own, understandably, that I hadn’t thought about the fact that they were just sitting in the hospital every day, not sure if I was gonna make it and how scary that must’ve been. So I got a real sense of their experience of things, and I also ended up articulating my own experience of things more, and examining the situation in a way I hadn't been able to do before.

And then doing press for the movie — this is the most I’ve ever talked about being sick. In real life, I’m quite stoic. I don’t like people to know when I’m not doing well. I don't mind presenting myself as emotionally vulnerable, but I have always been a bit uncomfortable revealing any physical vulnerabilities. I don't want people to cluck over me. And so for me to talk about it this much has been a new level of me being open to presenting myself as is, in a way that I haven’t always been comfortable with. But it’s been kind of amazing so far, and a lot easier than I thought it was going to be.

The Big Sick is the most intimate thing I've ever written, and going forward, I want to take more inspiration from things I've experienced in my life to tell more (fictional) stories. I’ve had such an amazing breadth of experiences, I've been able to see a lot of different worlds, and I’m more interested in setting things in those worlds than telling my own story over and over again.

Because honestly, getting sick is the most intense thing that’s ever happened to me, by a long shot, and when it comes to writing about my life, I don't know if I could ever top that.