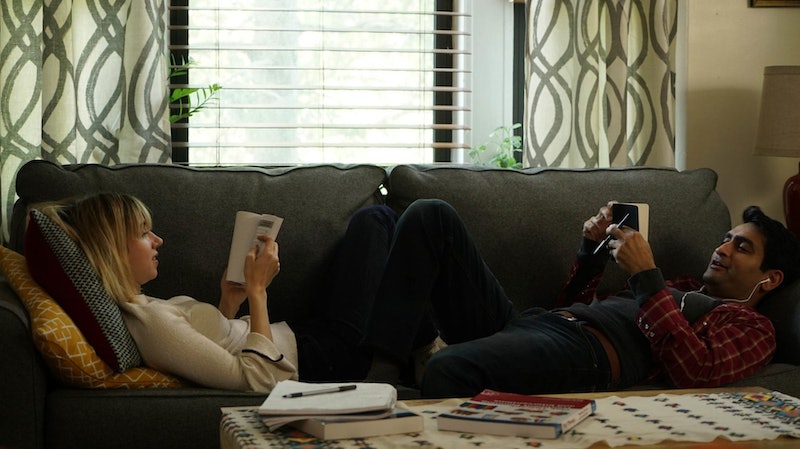 Romantic comedies are a dime a dozen — except when they're not. Every once in a while, a rom-com comes along that breaks the mold and offers an ultra realistic (and funny) look at what it's really like to fall in love. One such film is The Big Sick, out June 23, which is already being hailed as one of the most realistic and authentic rom-coms you're likely to see. That makes sense, since the film's tagline is "An Awkward True Story," but is it really? Is The Big Sick a true story?

For the most part, yes, it is. The film tells the story of Kumail, a young comedian struggling to make ends meet while also trying to find his identity as a Pakistani immigrant in America. He fends off his parents' attempts to arrange a marriage for him to various Pakistani women while falling for a white American woman named Emily. After dating for several months, he and Emily have a falling out and she suddenly falls ill with a lung infection that forces doctors to induce a coma, leading Kumail to call Emily's parents. For the next week in the hospital, Kumail and her parents — meeting for the first time — attempt to understand each other and become something of a family. That's the basic plot of the movie, and while a few minor details have been altered, it's pretty much a beat-per-beat account of how the film's screenwriters (and now-married couple) Kumail Nanjiani and Emily V. Gordon met and fell in love a decade ago.

Even though the film is very personal to Nanjiani and Gordon — it basically tells the story of the first year of their actual relationship — the pair believe that its true life origins make it relatable to anybody who's ever fell in love. "I want the viewers to see it as we intended it, which is like a little, lovely love story," Gordon told The Hollywood Reporter's Rachel Ettlinger. "It’s a love story with a lot of complications, and it’s a love story that has cultural stuff. It has illness, it has family, it has arguments. That’s what I want them to take away from it. I want them to see it as it is."

It was originally Nanjiani's idea to write the film by himself, with his wife's permission, of course, but he eventually realized that her direct involvement would help the story tremendously, as it would showcase their relationship from both of their viewpoints. "Individually, neither of us could have done it. So, the fact that I was trying to do it on my own was stupid," he told Zach Gayne of Screen Anarchy. "Then, [Emily] came on. And basically, you know, I was getting notes from her, but the notes... I was like, 'Oh, this is a completely different perspective of these events that enriches it.' ... Because a lot of my writing was obviously from my perspective, and then from [Emily's] perspective... See the negotiation of any relationship, that is a big part of the script, all happened because of Emily, and also, when Emily wakes up, for us it's all happy, and I remember just being happy. My memories of that are only happy. Her memories of that are miserable."

Like any film based on a true story, The Big Sick takes a few liberties with some of the facts (for example, Nanjiani never actually worked as an Uber driver like the onscreen Kumail does). But overall, the movie is a very personal telling of the extraordinary circumstances under which real life couple Kumail Nanjiani and Emily V. Gordon met and fell in love. In other words, the movie's not your typical rom-com — and it's all the better for it.