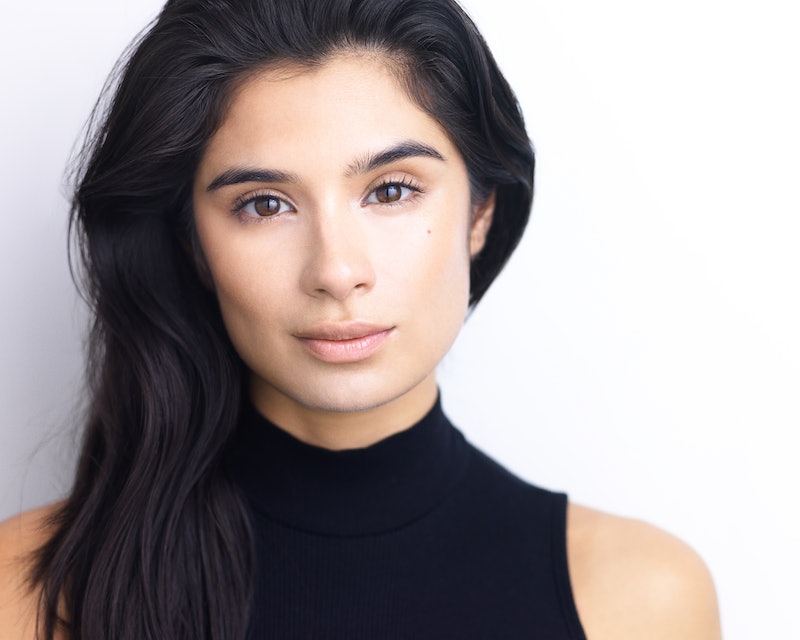 Fierce actor, author, and activist Diane Guerrero's participation in the 2017 Women's March comes as no surprise to her fans. The 30-year-old has been outspoken about her past in general interviews, in her memoir In the Country We Love: My Family Divided, and in her active campaign for immigration reform via organizations like Mi Familia Vota. There are many reasons that women from all walks of life have registered to participate in the movement, but, for Guerrero, the movement is a symbol, a step, and a call to action that we all have the responsibility to answer.

Now, Guerrero explains her motivations for marching and her thoughts on President Donald Trump, as told to Bustle Entertainment News Editor, Kadeen Griffiths.

When President Obama gave his farewell speech, he highlighted that change can be simple. It can be as simple as understanding that we are a democracy, that we have a Constitution that protects us. It can be as simple as understanding that we have voting rights, and can use them. Actually, I don't think his speech was a farewell; I think it was a call to action. For that reason, I'm not afraid going into the next four years. I'm not afraid, because I’ve never seen so many people from all walks of life — different religions, different creeds, different sexual orientations, different genders — stand together against a very small group of people who want our country to go backward.

I feel like a lot of us have been taught to fear. To fear the administration, to fear government, to fear politics, to fear people who are louder than us. I remember when I was younger, older folks would say to me, "There are three things you don't talk about at a dinner party: religion, politics, and money." But I think the truth is quite the opposite.

We need to use whatever power we have — and we have power — for good.

What this election has taught us is to not be afraid of speaking out and having an open dialogue about what's going on. We need to talk about what serves us, what offends us, who we are, and why we're here. In my opinion, we're here to be happy; we're here to work hard; we're here to do the right thing; and we're here to save our planet. And I think that we can achieve it. I think the problem is apathy and thinking that we can’t do anything.

My involvement in the Women's March began when one of my girl friends posted a picture that simply said, "Women’s March, January 21." I think we understand what's at stake here, the symbolism of this march and what it represents. Now that it’s grown so much, it’s going to be such an important event to be part of and to witness. The March is the symbol that we need, the demonstration that we need. For people who feel like they don’t have a voice, who feel like they want to join something but can’t quite find their place to do so, this is a good starting point.

What we’re marching for is an intersectional collage of things that we all believe in. You can't think about a certain group and their equality or their strife or woes without thinking about another's. I want citizens to mobilize around that idea, the understanding that we are the majority, not the minority. We have so much power when we unite and fight for the same things: dignity, respect, and equality.

All I know is that, since I recognized my responsibility as a human and citizen, I’m much happier, and I know that I can find purpose in that responsibility.

I think this will stimulate in a lot of people a sense of responsibility to participate; to focus on something that they really care about, something that’s close to them, and work from there; to take steps to better their situation and their community. This can mean going online and seeing how you can donate, or joining forces with someone else, or just using your voice to stand up for yourself and maintain your boundaries. Hopefully then, in two years when we have congressional elections, we can motivate our communities to vote for people who are going to represent us properly. It's really as simple as that.

To be fair, I’m not a politician. I don’t have all the answers. All I know is that, since I recognized my responsibility as a human and citizen, I’m much happier, and I know that I can find purpose in that responsibility. I can participate where it really matters, instead of sitting at home being sad about how terrible the world is and how I can’t do anything about it. We can’t fix everything in one day, but, if enough of us get together and participate, we sure as hell can make some change.

It might sound crazy, but it was only two years ago that I really decided to use my platform and put myself out there in a political way. Everyone has their own journey, and this is when I began mine — two years ago was when Donald Trump started hating on my people. I started seeing a lot of negative rhetoric toward the immigrant community, Mexican people, women, and the LGBTQ community. After that, I felt it was necessary to come out and share my story. I felt my very livelihood, who I am, what I’m about, my womanhood — I felt it all threatened in a very open way. I wanted to add to the conversation, so it’s not as one-sided.

There came a point when I had to realize that I've gained enough human experience to have some input on these issues.

As you grow up, you start caring about different things. I’ve always wanted to be part of a movement or the movement for human rights. I’ve always been on the side of the oppressed. I’ve had 20 years — more actually — of taking it, of just letting things happen to me and my family. There came a point when I had to realize that I've gained enough human experience to have some input on these serious issues. So, I’m going to muster all the energy I have to fight for change.

Even though it’s been only two years since I started doing this, I feel like I've come a long way. And it's not in the sense of what I've done in the past or the potential of what I know I can achieve in the future. Instead, I think my journey can show other people how easy it is to change the world. It just takes that first step: realizing your power.