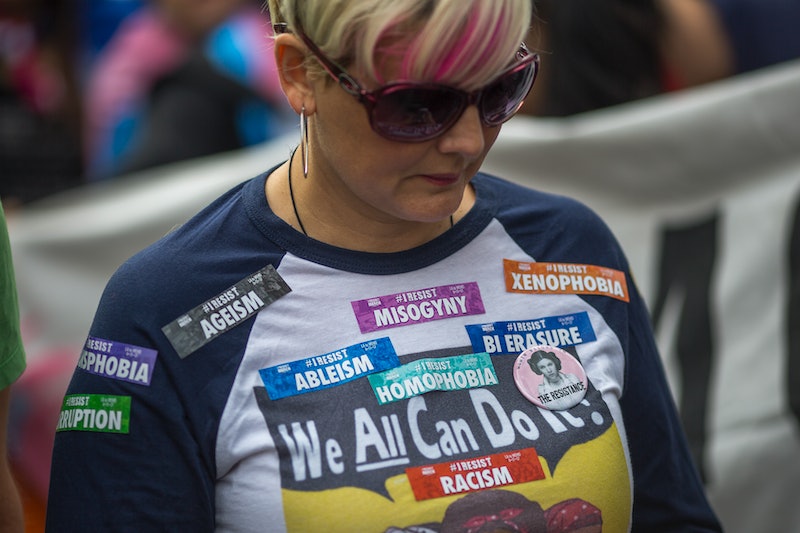 If you ask Senate Minority Leader Chuck Schumer why the Democrats lost the 2016 election so badly, as This Week host George Stephanopoulos did on ABC Sunday morning, he'll tell you that it's because they were too "namby-pamby." Yes, really. But now, as Schumer went on to explain, the Democrats have a new plan to fix the mistakes seen in last year's election loss. The new plan must be extra masculine and strong if "namby-pamby" means what I think it does: not just weak or feeble, but effeminate too.

Forgive me if I'm reading too much into Schumer's comment, but the choice of "namby-pamby" in his wording sure sounds like toxic masculinity to me; at the very least it's a tad homophobic. But it's not only that. Combine his comments with the near-constant calls for Democrats to end their "identity politics," and I'm worried that everything that makes me excited to volunteer and work on Democratic political campaigns could go out the window with this new plan.

Speaking with Stephanopoulos, Schumer went on to describe an economic message that will make up the bulk of the Democrats' new plan. According to Schumer, it will be called "A Better Deal."

This is sharp, bold, and will appeal to both the old Obama coalition, let's say the young lady who's just getting out of college, and the Democratic voters who deserted us for Trump, the blue-collar worker. Economics is our strength, and we are going to get at it.

But the Democrats don't need a purely economic agenda as many have suggested. Sure, economics needs to play a big part of their messaging — certainly a lot bigger than "Trump is so bad" — but Dems can't backtrack on social issues either. Call it identity politics if you will, but the future America that many young and progressive people are working for includes abortion rights, trans rights, a path to citizenship for immigrants, and an end to mass incarceration and police brutality.

If there's one thing that the Clinton campaign did successfully, it was campaign for that future. It campaigned against an America of misogyny, racism, homophobia, xenophobia, transphobia, and rape culture — among other things — that are far too engrained in our politics and day-to-day interactions. But that vision for the future wasn't enough to convince all Americans. Still, in the states that mattered most — Michigan, Pennsylvania, and Wisconsin — Trump voters only outnumbered Clinton voters by 79,000. Given that Clinton won nationally by nearly 3 million votes, it shows that something was working in her campaign's strategy.

Yes, Clinton's campaign failed. But it doesn't mean Democrats should accept the status quo and compromise on social issues in order to win elections. For starters, I think that would be immoral. Democrats need to fight for justice and equality for all Americans — not just focus on policies that help straight, white men.

Many pundits would prefer you didn't see it that way though. For example, Mark Penn and Andrew Stein wrote in The New York Times earlier this month about why working class voters didn't come out to support the party.

They saw the party being mired too often in political correctness, transgender bathroom issues and policies offering more help to undocumented immigrants than to the heartland.

Yes, there were a lot of Rust Belt voters who shunned the Democrats for various reasons. But that's not the whole story. In addition, far fewer black voters, who vote for Democrats at rates nearing 90 percent, turned out to the polling stations. The focus, then, should be to repeal voter ID laws that target minorities and help grow turnout in what is truly the Democratic base. But that doesn't fit into these pundits' worldview, in which older, whiter, male voters decide the future of the country.

It's easy to forget, however, that it wasn't economic anxiety that put Trump in the White House; it was cultural anxiety, as Robert Jones explained in The Atlantic this month. The main concern among many voters was that 2016 was the "last chance to stop America's decline." This is supported by the fact that Clinton scored higher support than Trump among voters who worried most about the economy, according to Fox News' election exit polls that included 9,682 respondents.

The goal of many Democrats, as Derek Thompson explained in The Atlantic back in December, is a "pluralist social democracy," a mixture of government-run health care and other programs that benefit the poor. And that goal extends far beyond economics. A path forward that prioritizes economic issues over social ones fails to motivate me to volunteer and work for the Democratic party.

So, yes, the Democratic Party needs to find new messaging to reach the American voter. And it can focus on economic issues if it wants. But it needs to make sure that it doesn't forget about social issues along the way. After all, social issues and economics are often intertwined, especially for those of us voters who are not white, straight men. And even if they weren't, I think it's the right thing to do.