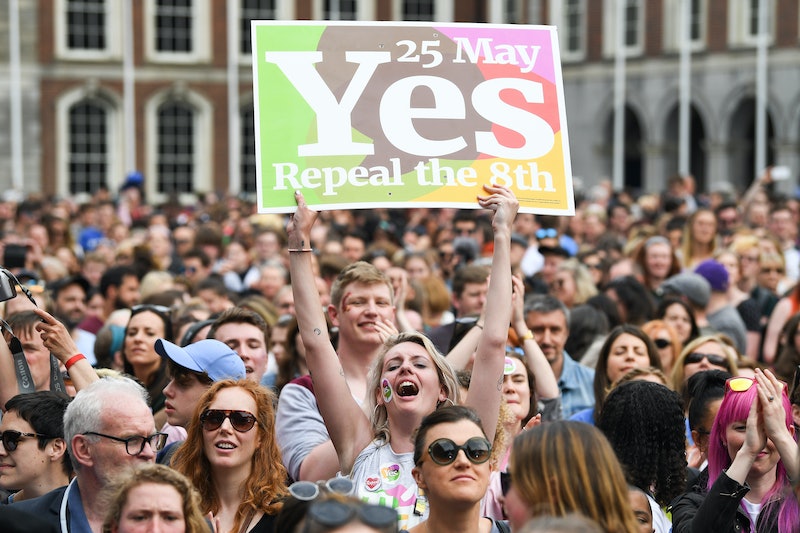 Ireland's airports became sites of community for Irish expats this week as thousands flocked home to vote in the historic referendum on abortion. Stories of strangers bonding over matching "Repeal the 8th Amendment" garb on their way back to Ireland flooded social media. But Ireland's #HomeToVoteYes movement for the abortion referendum also highlighted a trip filled with symbolism, according to activists greeting those expats.

Ireland voted overwhelmingly to repeal its constitutional amendment outlawing abortion on Friday. Since 1983, Irish women needing abortions have been forced to get illegal (and often unsafe) procedures at home or to terminate their pregnancies abroad. And the #HomeToVoteYes movement symbolized the support from many activists for those women.

"So many women have come through those gates following terminations abroad," Claire McGowran of the London-Irish Abortion Rights Campaign (ARC), the group of activists that welcomed expat voters at the airport, tells Bustle. "They've come back silently, to no fuss, no reception, just the shame, stigma and secrecy of being forced overseas for health care. We were there in solidarity with them."

Irish citizens who live outside the country — there are about 750,000 — cannot cast absentee ballots. They're still permitted to vote as long as they've been abroad for less than 18 months, but they have to physically return to Ireland to do so. The London-Irish ARC estimates that 40,000 Irish expats are eligible to vote, according to The Irish Times, and worked to mobilize these people through a #HomeToVoteYes campaign.

Obviously, not every Irish expat has the ability to make a long trip home to cast a ballot. It's not clear exactly how many people did so, but The Independent estimates the number to be in the thousands. Reports of sold out flights to Dublin circulated social media on Friday.

The London-Irish ARC has been working hard to support those who do make the trek back. The night before the vote, ARC activists congregated in the first arrivals terminal of Dublin Airport, the biggest of five international airports in the country, to welcome #HomeToVoteYes travelers. Holding signs with messages like "Welcome Home" and handed out stickers and pins, these activists greeted expats with ecstatic applause.

McGowran tells Bustle that the moment gave her goosebumps. "As greeters, we were overwhelmed by the volume of people coming out in their Repeal jumpers and Yes badges, and the kind words we received from other people waiting in arrivals," she says. "For those coming out of the gate, I can only imagine is was emotional to see such a happy, excited crowd of people there just for you. A lot of people were looking behind them to see who the crowd were cheering for, only to realize it was for them — let's just say there were tears!"

They also passed out Tayto, a popular brand of chips in the United Kingdom, for which several people expressed their particular gratitude on social media. One person wrote about it in a tweet that went viral: "I. ADORE. THIS. STUPID. COUNTRY."

These touching videos show only the end of the journeys of these #HomeToVoteYes voters. Many also had powerful experiences along the way, particularly through meeting like-minded expats from around the world while on their way back to Ireland.

BuzzFeed UK reporter Laura Silver shared an image of three women who met each other on the plane home after seeing each other's matching "Repeal" sweatshirts. Dozens of similar stories have popped up on Twitter over the past week.

"Meeting other people in the airport, and seeing other people with their T-shirts on is emotional," Sorcha Lowry, an expat who traveled home from New York City, told BuzzFeed News.

As McGowran describes it, the power of the #HomeToVoteYes movement goes beyond the ballots these voters cast to help deliver the victorious abortion ban repeal on Friday.

"It's not just about them marking an X on the voting slip," she tells Bustle, "it's about them taking that journey for all the thousands of women who've made the journey in the opposite direction for an abortion."