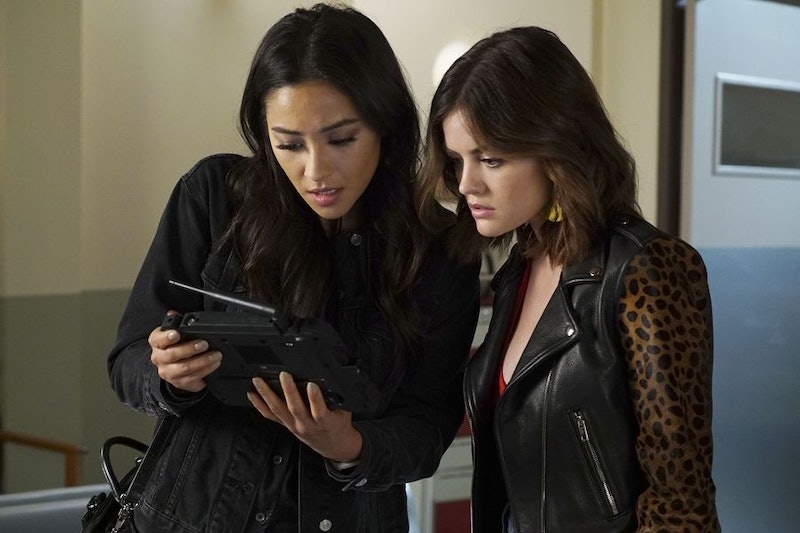 Eric McCandless/Freeform
By Lindsay Denninger
May 10, 2017

I never thought that Aria Montgomery would be the first Liar on Pretty Little Liars to crack and move over to the dark side (I figured Hanna would break with much less force), but well, here we are, folks. Is Aria working with A.D. on Pretty Little Liars? She sure seems like she has moved onto what Sydney called “the winning team.”

It all started with this stupid game board that A.D. has constructed for the Liars. Every Liar has a turn, and because Aria can’t hang or is just not as tough as her friends, she wants out (it also has to do with Ezra, but I prefer to think of Aria as just giving up and giving in). Long story short, Aria left an Alison in need to jump in the back of a stranger’s limo (which is something that every mom has instructed me not to do) and get in good with A.D. She found Sydney, wearing an earpiece, in the back of that limo, telling Aria that she could be a loser or a winner, and that it was much more fun to be on the winning team. I mean, yeah, it’s great to win, but it’s also great not to betray your friends, right?

Fast forward to Aria’s turn at the game board that… never came. Aria missed the whole “Emily’s eggs are in Alison’s belly” note, which ostracized her from the group, and it was at that moment A.D.’s plans became clear — divide and conquer, baby. I think that A.D. thinks nabbing Aria will be a coup because he or she will have a person on the inside, but I think that Aria is going to play double agent here. A.D. seems to know everything, so we’ll see how that goes, but I’m just hoping the letter of Aria’s first name is not for A-Team.