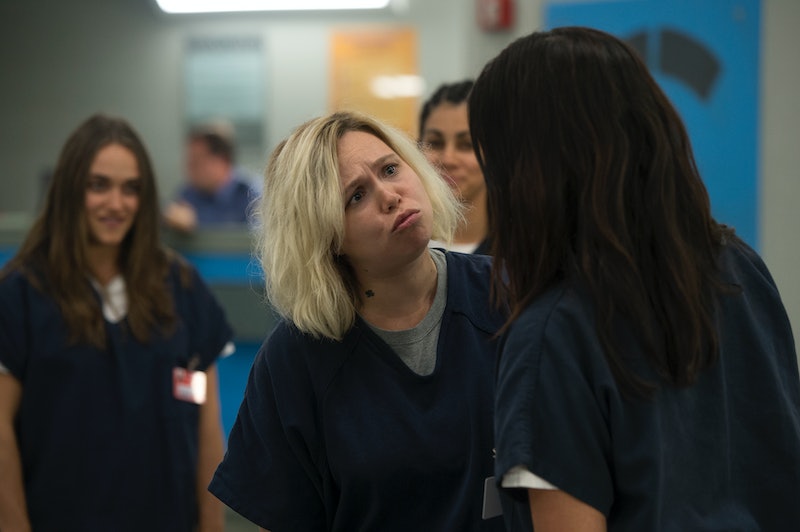 Orange Is The New Black Season 6 drops the show’s cast in a new setting — Litchfield Max Security Prison — and one character gives the beloved cast a fairly unfriendly welcome. Madison “Badison” Murphy is a Boston-born prisoner who quickly establishes herself as a force of nature within Litchfield Max, but actress Amanda Fuller tells Bustle that despite the character’s nickname she's not all that tough. “I don’t think she sees herself as bad — I think she’s scared," Fuller says. That's backed up by the real reason Badison is in prison in OITNB. It's not because she’s “bad” as her name implies — she just had no other way to look out for herself than acting bad. Spoilers ahead for Orange Is The New Black Season 6.

Badison is the first of several new characters introduced in Season 6, sharing a cell with Red following the transfer of the Litchfield Minimum Security inmates to Max. Despite Red’s commanding presence, Badison fearlessly begins throwing barbs and cracking wise, while also showing off her knowledge of the goings-on at Litchfield Max.

Badison’s real name is Madison, but even actress Fuller admits that she never uses her character's real name. "I haven’t called her Madison.” she admits. Like many characters in Orange Is The New Black, her backstory reveals that things weren’t peachy outside of prison, and the circumstances of her upbringing played a large part of what turned Madison into Badison.

After Badison leaves her cell in administrative segregation with Red and returns to C-Block, of which she is a proud enforcer for the drug pushing Carol, Badison reveals that she’s not just bad —she’s also a trickster. She toys with Piper during her time in C-Block and makes a point out of playing pranks on others that range from harmful to threatening. Badison is essentially the class clown of Litchfield Max, but sometimes her jokes end in bloodshed. Despite her violent nature, Fuller believes that her pranks are about protecting herself. She says, "[Badison] tries to put on that front to protect herself from getting hurt. We get insights into that a little bit through the season whenever she’s shut down or is turned away. We see her backstory and [she’s] coming from a place of being bullied then seeing her get transformed into a bully so to speak to protect herself.”

In Badison’s flashback, audiences meet a teenaged Madison who grows up in an abusive home and is eventually sent to a camp for delinquent teenaged girls. In an attempt to try and prove her “badness” to the other campers — who bully Madison for not being cool in their eyes — Madison “pranks” one of her fellow campers by setting them on fire in front of the other campers to get them to start calling her “Badison,” a nickname that she bestowed upon herself.

Fuller says, "Clearly, she ended up needing to get attention in really bold, scary, dangerous, unsafe ways. And she ended up in prison and then was more comfortable in prison to stay there and become a lifer that she was in the outside world. That has to mean that she comes from a place that maybe she didn’t feel so safe in.”

While she may have never felt safe outside, Badison seems to know that no matter what anyone in Litchfield does to her, she’ll be able to retaliate with something creative, twisted, and probably painful. If setting someone on fire is Badison’s idea of a prank when she’s outside of prison, there’s simply no telling what she’ll be willing to do inside the walls of Litchfield.