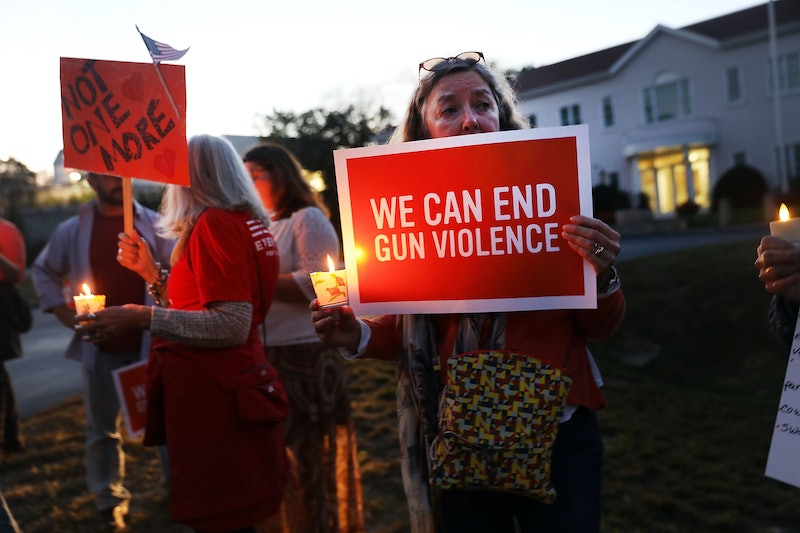 Language matters. And when it comes to divisive issues, the language you assume can be telling. Are you pro-life or pro-choice? Anti-choice or pro-abortion? What about marriage equality, if that's what you call it? Do you have an opinion about the term "gay marriage"? These terms, some more than others, permeate the media. Which ones you hear more often most likely depends on the media you choose to digest, which is almost certainly related to your politics. So, why is the promotion of common-sense gun safety consistently called "gun control"? It certainly doesn't sound convincing to pro-gun rights enthusiasts.

But the term gun control rolls off the tongue. It's a self-explanatory term that, more or less, serves the political agendas of everyone, regardless of which side you fall on. For gun control advocates, it's a harsh, combative term that quite literally means what it says: to regulate firearms. For gun control opponents, it's an equally combative, galvanizing term that sounds more like "restricted constitutional rights." It evokes strong feelings whether you feel we need more or less of it.

There are other terms, but as Molly Ball wrote in the Atlantic in 2013, nothing else seems to stick. The options she lists are: gun violence prevention, gun safety, firearms regulation, illegal guns, and criminal access to guns. Each of them, Ball points out, are either too specific, too broad, or, in the case of "firearms regulation," just as galvanizing for conservative opponents as the term gun control, itself.

There have been attempts at rebranding over the years, notably under the Obama Administration. But, as Michael McGough predicted in The Lost Angeles Times back in 2015, it didn't work.

"People who despise 'illegal immigrants' aren’t going to feel any more kindly about 'undocumented immigrants' once it’s clear that the terms refer to the same reality," McGough argued. People are smart.

It seems, more or less, that the language each side chooses does little more to serve their efforts than making them feel better about it. That's not to say that language doesn't matter, because it is more than just semantics. Many hot-button political issues are directly concerned with real people's feelings and well-being, and demonstrating sensitivity and respect is important, especially on an interpersonal level. It gives people dignity. It just may not get you anywhere insofar as political action.

For years, New York Times op-ed columnist Nicholas Kristof has argued that the gun control debate should be framed as public health issue. In two columns, two years apart almost to the date, headed with eerily similar photos of mourners after a mass-shooting, Kristof explained why he thought it would work.

What we need is an evidence-based public health approach — the same model we use to reduce deaths from other potentially dangerous things around us, from swimming pools to cigarettes. We’re not going to eliminate guns in America, so we need to figure out how to coexist with them.

Using the example of death-by-ovens in Great Britain and death-by-cars in the United States, Kristof outlines two different countries' approaches to simple regulations for every day objects. No one is going to eradicate cars or ovens, and for now, guns are protected by the Constitution. But, in the interim, the dangers of each could and can be tempered.

This week, in response to the Las Vegas massacre, Kristof wrote, "But public health experts think it’s plausible that well-crafted safety measures could over time reduce gun deaths by one-third — or more than 10,000 a year."

But the term "gun control" tends to shorten tempers the second it's brought up. It's divisive. Both sides feel that their right to protect themselves is in danger. So, if it's not probable that a re-branding is in order, or that either side is very likely to be duped by a shift in language, perhaps what needs to change is how gun control is discussed.

In fact, that approach is already working. On Thursday, Oct. 5, the National Rifle Association publicly called for regulations on so-called bump stocks. Bump stocks, used by the Las Vegas shooter, enable semi-automatic rifles to behave similarly to fully-automatic rifles, and the NRA acknowledged that:

The National Rifle Association is calling on the Bureau of Alcohol, Tobacco, Firearms and Explosives (BATEF) to immediately review whether these devices comply with federal law. The NRA believes that devices designed to allow semi-automatic rifles to function like fully-automatic rifles should be subject to additional regulations.

The NRA is known for opposing virtually all gun control legislation, which made this announcement remarkable. But it just goes to prove that there is possibility for bipartisan action to prevent gun violence. Perhaps, reframing the gun control debate will help critics realize it.