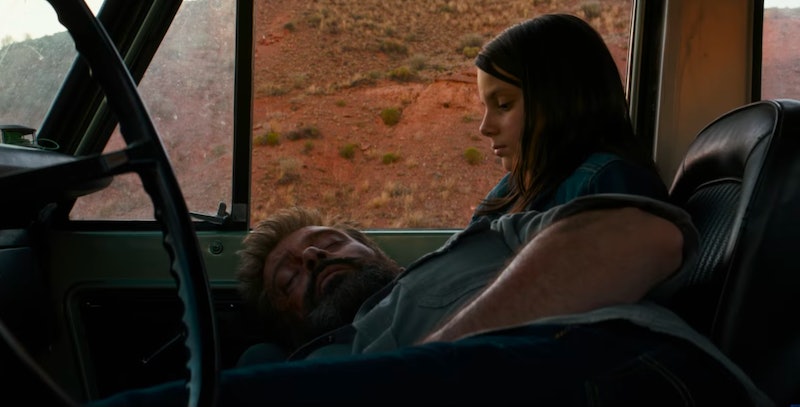 In Logan, Professor X isn't the only one affected by old age — Wolverine is, too. Something has happened since we last saw Logan in X-Men: Days of Future Past. He's aged, and his powers have aged with him. He's slow to heal and his punch isn't as effective as it used to be. Granted, he also spends all of his waking hours getting drunk, but it's clear that even if he wasn't, he'd still be far from the Wolverine we used to know. Something's not right with him, and it's unsettling. Now, we all know Wolverine is supposed to have the ability to heal, so why is Logan sick? Well, Wolverine, it turns out, has been slowly destroying himself for a long time. Spoilers ahead.

In Logan, Wolverine's health is deteriorating — that much was clear from early trailers, where Logan's scarring skin was on full display. The scars were a creative choice by director James Mangold, who wanted to show how Logan's old age had affected his powers. Mangold imagined that, along the years, Wolverine's healing power wasn't as effective as it used to be, hence the scars. "The simple idea was that his body would start to get a little more ravaged with a kind of tattooing of past battles, lacerations that remain of previous conflicts," Mangold explained in an interview with Empire.

But Logan's slowed powers aren't the only thing affecting his health in Logan. It's clear that Wolverine is sick, and perhaps even slowly dying, from the very beginning of the film. What happened, or why his health is deteriorating so quickly isn't really explained, at least not at first. And Wolverine's entire existence pre-X-23 revolves around being alive to take care of Professor X and then awaiting his own death. It's not until much later in the film that we learn why, exactly, Logan is so sick: the Adamantium in his body is poisoning him.

For those of you who don't know, Adamantium is metal put into Wolverine's body during Project X — it's what makes his claws so darn effective. For decades, it's been his best weapon in battle, but now it's all catching up to him. Now, it's never explicitly stated that the Adamantium is causing Logan's illness. Late in Logan, Wolverine is told by a doctor that something inside of him is killing him, poisoning his body from the inside out. Wolverine responds that he knows what's killing him, and it's clear that the cause of the problem is the metal in his body.

Why it took this long to affect him, I don't know. And who knows if the Adamantium will eventually have the same fatal effect on X-23 when she grows older. Either way, you have to admit, it's sort of poetic that the thing that has saved Wolverine's life countless times over, and the thing he's used to take countless lives, is what might kill him in the end.