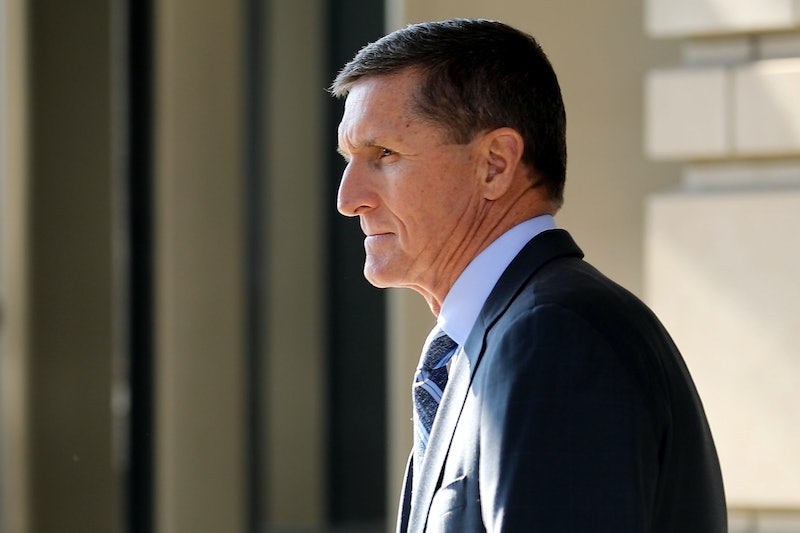 A federal judge on Tuesday eviscerated a former Trump national security adviser, but granted a request to delay his sentencing. In their request, lawyers cited special counsel Robert Mueller's investigation as the main reason why Michael Flynn's sentencing should be delayed, arguing that it should wait until Flynn is done cooperating with Mueller, according to multiple reports.

Last year, Flynn pleaded guilty to lying to the FBI about conversations he had with the then-Russian Ambassador Sergey Kislyak. During Tuesday's hearing, U.S. District Judge Emmet G. Sullivan told Flynn that the sentencing delay would not necessarily prevent the former national security adviser from serving jail time, The Washington Post reports. He also suggested that Flynn sold out his country.

"All along you were an unregistered agent of a foreign country while serving as the national security adviser to the president of the United States,” Sullivan said to Flynn during Tuesday's hearing, further referencing Flynn's lobbying work for Turkey, according to Axios. He reportedly pointed to an American flag hanging in the courtroom, adding, “Arguably that undermines everything that flag over here stands for."

Sullivan later walked back his comments, telling the court that he was "not suggesting [Flynn] committed treason," and instructed those present not to "read too much into the questions [he] asked," according to Axios.

At the beginning of Flynn's hearing on Tuesday, Sullivan offered Flynn the opportunity to take back his guilty plea, according to Politico. This is because Flynn's lawyers appeared to suggest that Flynn may not have known that a January 2017 interview with FBI agents — which took place without a lawyer — could potentially lead to prosecution for lying. However, Flynn's lawyers told the judge that they only mentioned that because two other men who were sentenced as part of the special investigation did, in fact, have lawyers present, per Politico.

Flynn reiterated his guilty plea before Sullivan on Tuesday, according to The Post, and asked that the judge proceed with sentencing. One of Flynn's lawyers clarified that the contents of their sentencing memo were written by Flynn's legal team, not him, personally.

As for the president, he tweeted about Flynn's hearing early Tuesday morning. He wished "good luck" to Flynn, and reiterated that "there was no collusion."

"Good luck today in court to General Michael Flynn," Trump wrote. "Will be interesting to see what he has to say, despite tremendous pressure being put on him, about Russian Collusion in our great and, obviously, highly successful political campaign. There was no Collusion!"

While granting Flynn's lawyers' request to delay Flynn's sentencing, Sullivan made clear that more time may not make a difference. And while prosecutors did not ask that Flynn serve jail time, the judge noted that he was not bound to follow those requests. (Mueller's recommendation was based on Flynn's "substantial assistance” with several ongoing investigations, The Post reported earlier this month.)

“This is a very serious offense — a high-ranking senior official of the government, making false statements to the Federal Bureau of Investigation while on the physical premises of the White House,” Sullivan said on Tuesday, per The Post. “The court will also consider [Flynn’s] substantial assistance in several investigations.”

A status report for Flynn's sentencing is scheduled for March 13. It remains unclear how that sentencing will proceed.