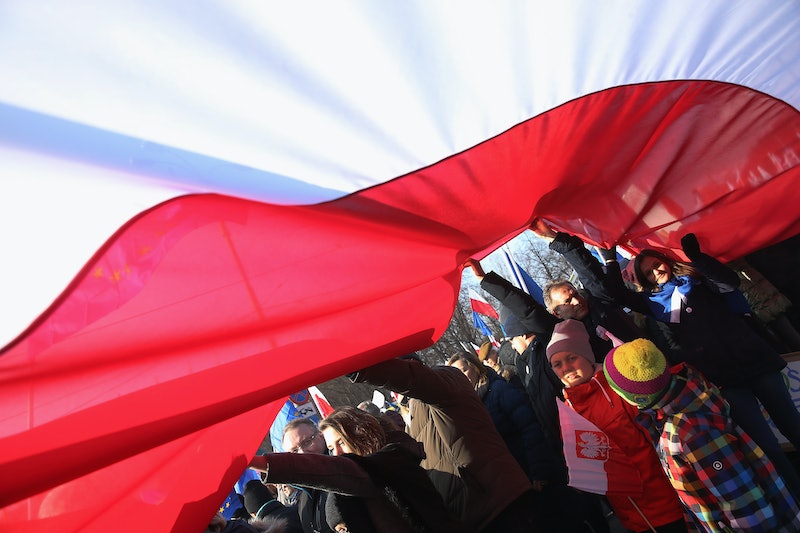 Heavy anti-government protests continued in several cities across Poland for the second day Wednesday morning as tens of thousands of people rallied outside the country's top court in Warsaw alone. But why is Poland protesting? The ruling party's attempts to purge the country's Supreme Court of more than a third of its judges has citizens up in arms.

Malgorzata Gersdorf, Poland's top Supreme Court justice, arrived for work Wednesday in Warsaw to cheers of anti-government protesters, defying the ruling party's recent efforts to force her to step down. Poland's ruling Law and Justice Party is seeking to reshape the country's top court through a series of controversial judicial reforms, including one that dismisses 27 of the Supreme Court's 72 justices. The law, which came into effect at midnight, drops the retirement age of Supreme Court judges from 70 to 65.

"My presence here is not about politics, I am here to protect the rule of law," CNN reported Gersdorf told protesters on the steps of Poland's Supreme Court. The 65-year-old Supreme Court justice said it was important to protect and respect the country's constitution as the document had been shaped by Poland's fundamental values, which, unlike people, don't change over the years.

In Warsaw, protesters surrounded the country's Supreme Court singing the country's national anthem and chanting phrases like "Free courts!" and "Down with dictatorship!" as Gersdorf defiantly entered the building early Wednesday morning. But the nation's capital wasn't the only city to see anti-government protesters take to the streets. According to Time magazine, protests against the Law and Justice Party's judicial reforms broke out in Krakow, Lodz, Katowice, Wroclaw, and a number of other Polish towns.

Critics, protesters, and members of the country's opposition parties have accused Poland's ruling Law and Justice Party of using authoritarian means to gain control of the judiciary by eroding the rule of law. According to CNN, Prime Minister Mateusz Morawiecki has argued that his party's judicial reforms are meant to strengthen democracy in the country.

Although authorities did not prevent Gersdorf from entering the Supreme Court on Wednesday morning, it was unclear if she, or any of the other 26 Supreme Court judges forced out by the new law, would really be allowed to continue to serve on the court's bench. Unlike U.S. Supreme Court justices, who serve life-long terms, Polish Supreme Court judges serve just six-year terms. Gersdorf's term was set to end in 2020, according to the Huffington Post.

Under the new law, Gersdorf and the other 65-year-old or older Supreme Court judges could ask Polish President Andrzej Duda, a former member of the Law and Justice Party, for permission to serve out the remaining years of their terms. But according to CNBC, Gersdorf has refused to ask Duda to exempt her from the law, claiming that to do so would equal "subordination."

"The constitution obliges me to a six-year term and I must proceed according to the constitution," CNN reported the Polish Press Agency (PAP) quoted Gersdorf as having said Tuesday. According to the cable news outlet, 16 of the 27 judges who would be forced off the bench by the new law have petitioned President Duda for permission to continue serving out their terms despite being of retirement age. It was unclear as of Wednesday morning who may have been granted an extension.

But while Gersdorf has been one of the most outspoken Supreme Court judges, she wasn't the only judge to make her way through throngs of protesters in order to show up for work Wednesday morning. Every one of the other 26 judges who would be forced to step down by the Law and Justice Party's new law also arrived for work at the courthouse Wednesday.