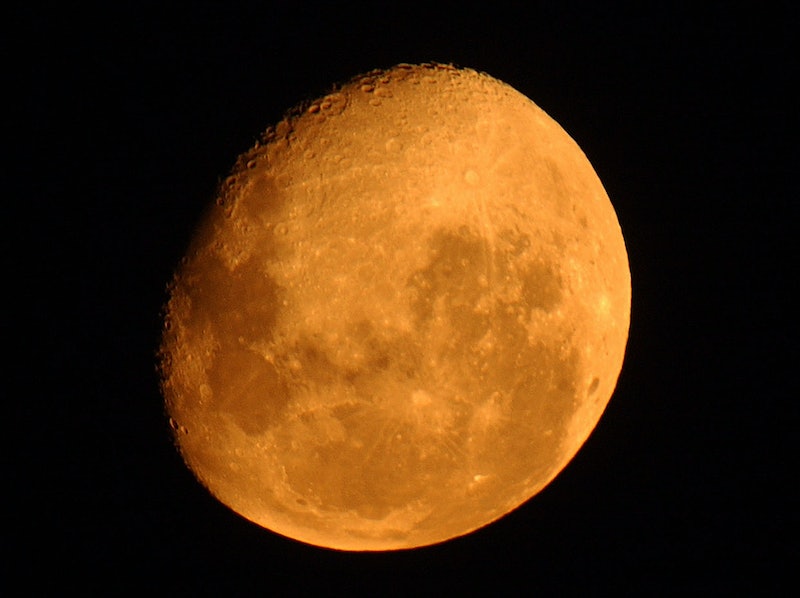 The short answer is that the Harvest Moon is not actually orange — womp, womp — it just looks like it is. The long answer is that it's an optical illusion that creates the appearance of an orange tint on the moon's surface. The Harvest Moon, rising on September 24, at 10:53 p.m. ET, is the first full moon that occurs after the autumn equinox. Due to the moon's positioning, the Harvest Moon is an incredibly bright moon. That's actually how the Harvest Moon got its nickname; with such an abundance of light, the Algonquin tribes could see at night and go out to collect their crops. Aka, it was the moon that reminded them it was time pick their harvest.

With the moon rising earlier thanks to the autumn equinox, we'll be able to look for it just along the horizon after the sun sets. It's a nice celestial buffer as we get used to shorter days and longer nights, we have something pretty to look at for a while. When we observe the moon at the horizon, we're seeing it through a thicker part of the atmosphere than when we see it higher in the sky. The horizon's atmosphere scatters the more cool tones, while letting us see more of the warmer tones. These combined conditions come together to create the appearance of a moon that looks bigger than usual, brighter than usual, and much more orange than usual. When the moon is directly overhead, we can see more of its cool tones and less of its warm tones, and of course, once the moon is overhead it looks much smaller.

What's more, this big, bright and orange illusion will begin up to a few days before the full moon and will last up to a few days after the full moon. So long as you're watching for the rise of the moon just after the setting of the sun, you'll be able to catch it in all of its golden glory. This is the only time of the year that the moon rises in this way and at this time, so you'll want to soak up the optics while you can. As if you needed an excuse to spend some time outside, the last week of September is sure to provide a lot of spectacular views. The Harvest Moon, like any other full moon, is a great time to sit back, reflect on the month before and the month ahead. It's a powerful time to set intentions, and use the light both physically and mentally align your heart and mind.