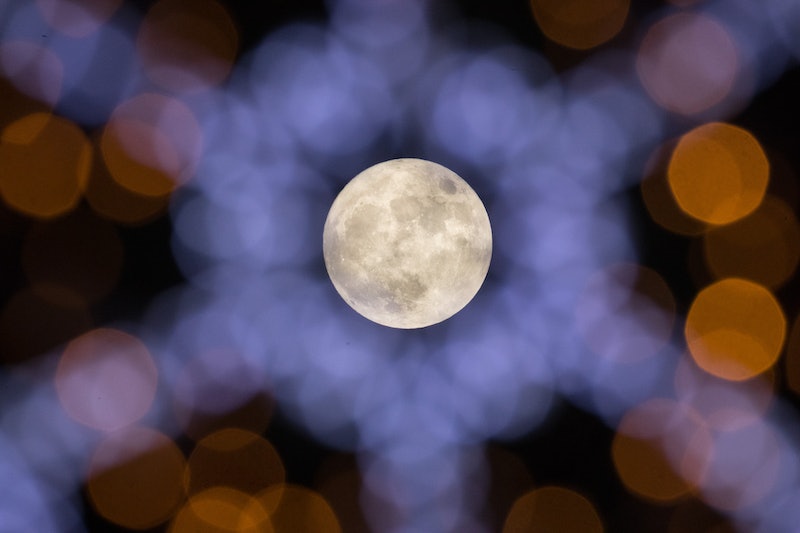 The beginning of a new and exciting year isn't all you'll be celebrating come January. We can also expect two different full moons — plus a total lunar eclipse, AKA a blood moon! Both full moons are supermoons, and one will occur the night of January 1, known as the Wolf Moon. Why is the January Moon called the Wolf Moon, though, and what's the significance behind it? You might want to pay attention to this moon and plan ahead, because it could affect the resolutions and goals you set for 2018.

According to Space.com's managing editor, Tariq Malik, the Wolf Moon gets its name from Native American tribes and early colonial times, when people would see packs of wolves in the wintertime, howling outside the villages at night because they were hungry. While there's no definitive proof that wolves howl at the moon, they are indeed nocturnal creatures, and they do raise their heads when they howl, because it helps carry the sound further. This could explain why we believe they howl at the moon.

Other names for the Wolf Moon include the Old Moon, Ice Moon, Moon After Yule, and Snow Moon, although this last one is more commonly used for the full moon in February.

Folklore has established an association between wolves and the moon all over the world, across numerous cultures — including Scandinavian and German mythology — and the Wolf Moon carries heavy importance for many of us.

What Does The Wolf Moon Mean?

To understand the history behind the Wolf Moon and its symbolism, it helps to understand what wolves themselves stand for, and how it applies to you during the beginning of the new year.

Wolves are strategic, resourceful, and big on community. Their packs follow ranks and relies on communication to accomplish their goals. They're incredibly expressive creatures, relying not only on vocal communication but body language and eye contact to produce a message. Lastly, wolves are resourceful — a necessity during the trying month of January, when frigid cold and the elements mean that only the strongest will survive.

Now, what does this mean for us? Come January, you might want to take notes from our old pals, the wolves. Make communicating with your own "pack" a priority. Spend time learning how to better communicate with those around you, whatever mode that may be. Take a step back to examine your own life and areas of weakness, and see if and how they might really be opportunities to grow.

Introspection is especially important this New Year. Full moons are symbolic of self-care and improving your inner beauty. Consider spending time practicing mindfulness, writing in a journal, or meditating. You might experience heightened brain activity and be in a particularly productive mood. Bear in mind the full moon magnifies everything, good and bad. It's symbolic of power at its peak, fullness, and a time when your intentions start to come to fruition. Put this energy to good use and set positive intentions for the next 365 days. Stay grounded and relaxed, and the full moon will work in your favor.

Regardless of your beliefs, celebrating the full moon and the beginning of a new year is cause for much excitement. If you were waiting for the ultimate fresh start, this is it. Figure our what your goals are and start planning your New Year's resolutions now, because it's almost showtime. If you want to watch the Wolf Moon, it will happen at 9:24 EST on January 1. (Note that if you're in Europe or Asia, it will happen on January 2 because of the time zone differences.)