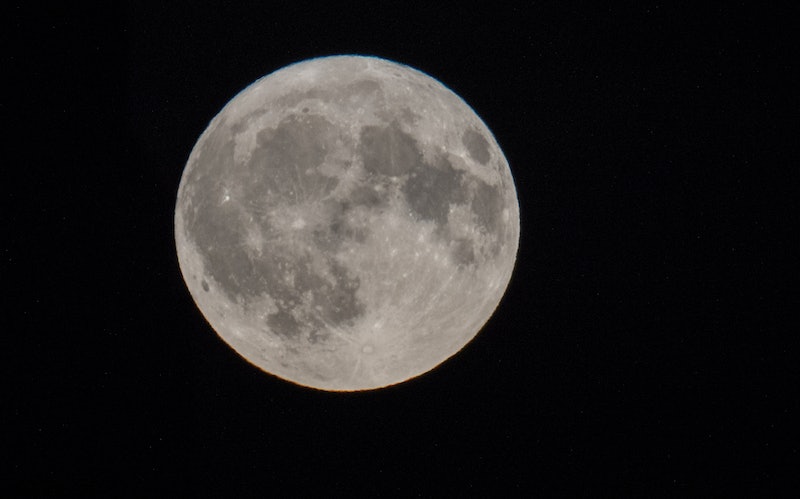 The last full moon of the winter season is almost here, meaning spring is just a single lunar cycle away. On Thursday, March 1, just before 8 p.m., the first full moon of the month will begin to rise. This will all culminate on March 2, at 12:51 a.m., when winter 2018's last full moon (aka, the worm moon) will shine its brightest in the sky, signaling the beginning of the end of the dark and cold season. Since it's approaching quickly, you'll want to know why the March 2018 full moon is called the worm moon, because its significance is more literal than you might think.

When you hear "worm moon," you probably think of some magical, hocus pocus reference, but the history behind the name is so much more simple than that. In the beginning of March, the ground begins to soften after a winter that rendered it frozen and hard. As the Earth warms up, roots begin to push their way though the dirt to the surface, and the soil loosens up and after that happens, earthworms start to reappear. Hence, the name given the to this moon, the worm moon.

Once the earthworms come back, certain birds who are typically away for the winter, like robins, come back too, quickly changing the environment into a fully realized spring. One day the ground is hard as concrete, everything seems barren and there isn't a bird in sight, and in what feels like the next day, the birds are chirping, the flowers are blooming, and you can dig your feet into the earth like sand. It really does happen that quickly, too. And once the spring fever takes over, you forget all about how icy and miserable the winter was. You can walk outside without your shoulders glued to your ears, you can enjoy the prospect of taking a walk, and your couch starts to look less and less interesting than it did all winter. Before you know it, you're in the depth of the Spring Equinox and you don't remember the winter at all.

So basically, the worm moon is an important moon because it's transitional. It marks the beginning of a change. It marks the middle point between cold and warm, winter and spring, inside and outside. The traditional name was given to the winter's last moon by the Native Americans who used the lunar phases to track the seasons for agricultural and hunting reasons. The name was later adopted by colonists and the Algonquin tribes who also used the lunar phases as reminders for when to tend to the soil or tap maple trees for syrup. Some people might even refer to March's first full moon as the sap moon as a reminder to collect the sap specifically.

But if you're not impressed with just the worm moon, don't worry: March has two full moons, and the second will be considered a blue moon because it's happening in the same month as the Mar. 1 full moon. The second full moon in March will reach its highest point on Saturday March 31 at 8:30 a.m., giving you perhaps the only legitimate reason to get out of bed on a Saturday morning before noon. The second full moon in March is special in its own way. Not only is it a blue moon because it's the second occuring full moon in a single calendar month, but it's also the first full moon of the Spring Equinox, which is certainly something to celebrate. But the biggest differences between both full moons should be that the earth will go from a groggy waking up period, to a hopefully fully bloomed period, making March one very exciting month with two very important lunar sights to see.