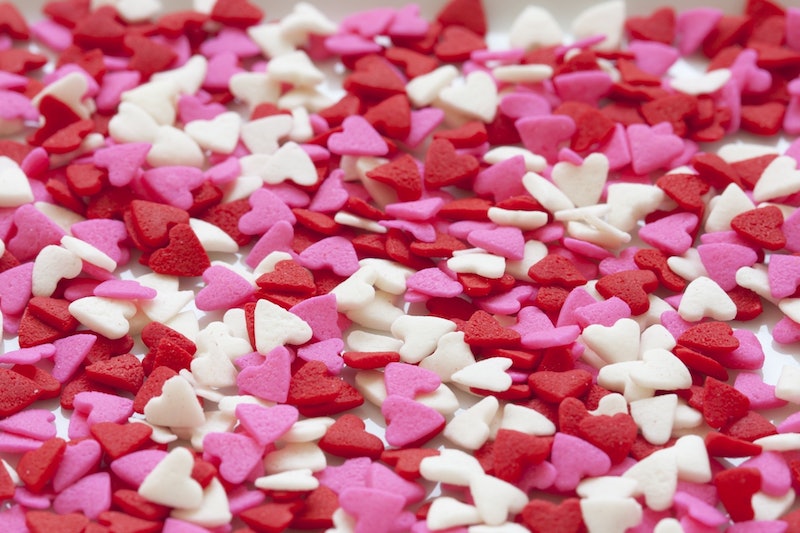 Whether you're single or in a relationship, I'm sure we're all hyperaware that Valentine's Day is on February 14th — it's really unavoidable, no matter where you go. But while we're all stocking up on candy hearts and gifts for our loved ones (or chocolate for ourselves, no judgment here), has anybody ever stopped to ask themselves just why Valentine's Day is on February 14th? Is it because the month of February is just so cold and miserable that whoever created this holiday decided to throw us all a bone? That would have been smart, but the history of Valentine's Day actually goes back a long way, and there's a reason we celebrate this sometimes polarizing holiday on the same day every year.

Though in this day and age we all recognize Valentine's Day as a day to celebrate love, the history of this holiday is a little murky. Valentine's Day today incorporates Christian and ancient Roman traditions. According to Americaslibrary.gov, the Romans celebrated the feast of Lupercalia, a spring festival (ha, good one), on February 15th. But with the introduction of Christianity, the holiday moved to the 14th to honor several martyrs named Valentine. And this is where things get confusing.

According to History.com, the Catholic Church recognizes at least three saints named Valentine or Valentinus, all with a different backstory. The one that seems to have the most obvious connection to the Valentine's Day as we know it today involves a Valentine who was killed for attempting to help Christians escape from Roman prisons. Legend has it that he fell in love with a woman who visited him during his imprisonment and wrote her a letter signed "From your Valentine," and that could be why we call each other Valentines today. Some people believe we celebrate Valentine's Day on February 14th to coincide with the anniversary of Saint Valentine's death or burial. ‌

Although that explanation seems to make sense, it's not universally accepted. Others contend that Valentine's Day was placed in the middle of February in order to Christianize the pagan festival of Lupercalia, dedicated to the Roman god of agriculture. In any case, at the end of the 5th century Pope Gelasius abolished Lupercalia and declared February 14th St. Valentine's Day.

So Valentine's Day has been on February 14th for centuries, but it wasn't until much later that it was associated with love. Experts believe the association began during the Middle Ages in England and France, where February 14th was generally accepted as the beginning of birds' mating season. A little strange, but this could be where the idea that Valentine's Day is a day of romance started.

Valentine's Day may have some questionable beginnings, but clearly a holiday that's been celebrated for this long probably isn't going away anytime soon. And just like the now-unpopular tradition of eating fruitcake on Christmas, if you don't like Valentine's Day and are looking for someone to blame, you can (at least partially) chalk this one up to the ancient Romans.

More like this
11 Podcasts About The History Of Juneteenth
By Emma Carey
Juneteenth Is Now A Federal Holiday — Here's What That Means
By Lani Seelinger and Syeda Khaula Saad
The Summer Solstice Spiritual Meaning, Explained
By Jessica Booth and Brittany Beringer
23 Personalized Father's Day Gifts Your Dad Will Actually Like
By Brittany Bennett
Get Even More From Bustle — Sign Up For The Newsletter