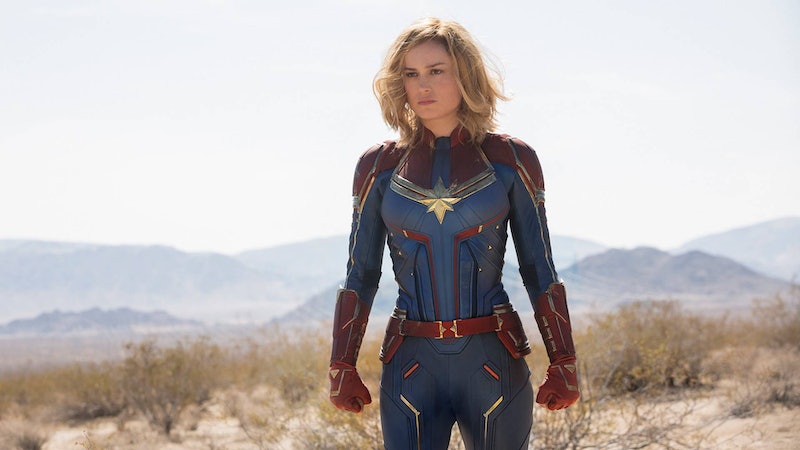 The Avengers 4 trailer dropped mere hours ago, and fans have already been dissecting it down to the last frame. But what's in the trailer isn't getting half as much buzz as what's not. There's only one movie before the upcoming Endgame seemingly wraps up this arc of the Avengers saga, a stand-alone film featuring a character so important to the Thanos story that the last action of Nick Fury's life was reaching out to her. Everything up until now points to her being a key element, so why isn't Captain Marvel in the Avengers 4 trailer?

Two reasons immediately jump to mind. First, Marvel doesn't want to detract or distract from the upcoming Captain Marvel solo film. Speaking to Den Of Geek, Marvel Studio's head Kevin Feige underlined the importance of Captain Marvel establishing her as a character in her own right, before associating her with the already well-known Avengers ensemble. "That film is entirely about introducing audiences to Carol Danvers and to a hero who is more powerful than any hero we've ever introduced," he said. Even though it's nearly a given that Danvers will make an appearance in Avengers 4, keeping Captain Marvel out of the trailer keeps the focus on her. Infinity War and Endgame directors Joe and Anthony Russo told the Happy Sad Confused podcast "We want to save her reveal," said Joe. "She will be a part of the MCU at that point [by Endgame], and part of the promise of these movies is that they are a road forward for all the films," Anthony confirmed.

Given that the trailer opens with and makes sure to linger on Tony Stark lost deep in space with "almost zero hope of rescue," it's almost a bonk over the head to fans aware of Captain Marvel's Kree-based abilities that she'll come to his aid. Part of what makes her one of the most powerful non-god members of the MCU is her ability to just fly through open space without assistance, and as Brie Larson pointed out to E! News, "She’s so strong - she can move planets!" Sounds like rescuing a stray spaceship won't be too difficult.

Second, you want to keep something in reserve to surprise fans when the movie actually comes out. At this point most people who've paid attention to Marvel movies know the likelihood of Captain Marvel's showing up, but Marvel's saving the big reveal to get fans in seats to make sure (not like they'd have to work very hard at that anyway). As a sort of consolation prize, the actual surprise in the trailer is Scott Lang showing up on Captain America and Black Widow's doorstep. Thought to be lost in the Quantum Realm, he's clearly not any more, which sent fans into a tizzy speculating how the Quantum Realm set up in Ant-Man and Wasp's solo movies will play into bringing characters thought killed by Thanos back into the fold. Because convoluted timelines are the real specialty of the Marvel universe... at least in the comics. It's time for MCU movie fans to get a taste of some alternate realities, and maybe check out the Avengers' soon-to-be-most-powerful member while they're at it.