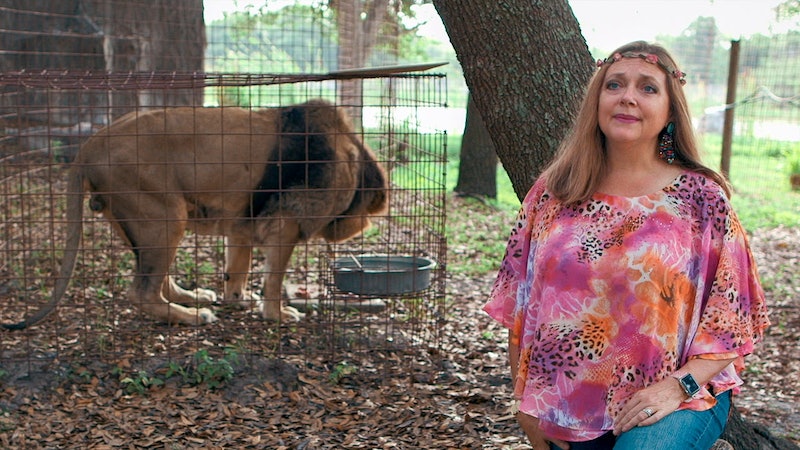 Tiger King is the surprising docuseries that swept the nation. As our country began to shelter in place, many of us turned to the wild antics of Joe Exotic for some much needed levity. And as the series took over the Internet, rumors of a new episode began to swirl. Now that the additional episode has been confirmed, many are asking why isn't Carole Baskin in the new Tiger King episode? The answer's simple and straightforward.

The new episode, titled "The Tiger King and I," which airs on April 12, is a post-show overview. It will be hosted by comedian and Community star Joel McHale, who said in a Netflix announcement, "I talk to a lot of people involved in the project — Jeff and Lauren Lowe, Saff, Eric Cowie, John Reinke, and Rick Kirkham — to see what's happened in their lives since the release of the program." Notably missing from that list? Carole Baskin.

For those unfamiliar with the docuseries, Carole Baskin runs Tampa, Florida's Big Cat Rescue, an animal sanctuary. Tiger King presents her as the rival and nemesis of Exotic, an Oklahoma zookeeper eventually sent to jail for plotting to have Baskin murdered, among other crimes. Tiger King heavily implies Baskin killed her first husband Don Lewis, something Baskin directly refuted in a blog post.

Speaking to The Wrap, a representative for Baskin stated quite plainly why she wouldn't appear in the new follow-up: “We have not been approached about a new episode and would not participate if asked.” Though clearly upset about the insinuations of murder, what really soured the Baskins on the Tiger King experience was lying about the series' intent and focus. "There’s almost no way to describe the intensity of the feeling of betrayal," says Howard Baskin to the Tampa Bay Times. "I just feel so angry that people have totally missed the point, and the point is these cubs are being abused and exploited and the public is enabling that,” Carole says in the same article. (For background: the Baskins initially agreed to participate in the series believing it would solely expose the cruelty of the for-profit exotic animal scene.)

When asked by the Washington Post about why the series focused so intently on the disappearance of Baskin's first husband — a crime she was never actually charged with — series creator Eric Goode said, "There are other real questions that arose about Carole and her past with cats and her evolution...If your mission is to tell people not to keep tigers and lions and leopards and jaguars in cages and bobcats and so forth, why do it?” He also believes the show is ultimately fulfilling the Baskins' initial reason for participating. "[Tiger King] is creating awareness and consciousness about...the suffering and exploitation of roadside zoos. And I wish she could see that because it’s doing precisely what her mission advocates for."

If fans of Tiger King want further follow up on Baskin, they can get word on Baskin's blog, because she won't be fooled twice by the series.