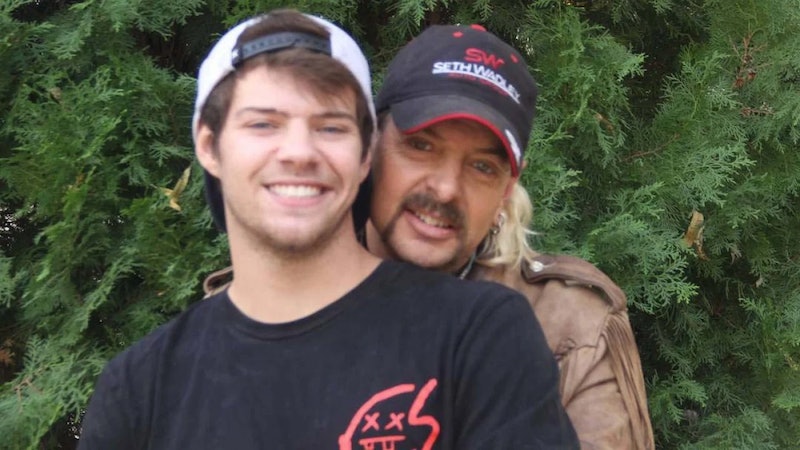 Much has been made about Tiger King star Joe Exotic. But one of the stickier plot lines in the docuseries is the zoo owner's romantic relationships. Exotic has been in many serious relationships, and was married four times. In an episode of Tiger King viewers even saw him wed both Travis Maldonado and John Finlay in a throuple. By the end of the series, however, Exotic gets remarried to Dillon Passage — and the two are still together today. Which is why fans of the show might want to know why Passage isn't in the new Tiger King episode?

The new episode called "The Tiger King and I," airs on April 12 and will be hosted by comedian and Community star Joel McHale. In it he speaks with people from the show like Jeff and Lauren Lowe, Saff, Eric Cowie, John Reinke, and Rick Kirkham. But though Passage has already done a bunch of interviews, he won't appear on the new Netflix special.

When speaking with Andy Cohen on his radio show, the Bravo star asked if Passage would make an appearance in the new episode. Passage then replied, "No, Netflix didn’t contact me to be a part of that."

24-year-old Passage was married to the 54-year-old Exotic for only a few months before he was arrested and sent to prison. Exotic is currently serving a 22-year sentence on charges of animal abuse and conspiracy to kill rival big cat sanctuary owner Carole Baskin. Speaking to People, Passage said that wasn't a deterrent. "I’m not going anywhere. Joe was there for me in my darkest moments. I’m not going to just abandon him when he needs support more than anything.”

Passage also spoke with ET about the show's creators, Rebecca Chaiklin and Eric Goode. Passage told the outlet, "They were really honest with me from the get go...I don't feel taken advantage, because they told Joe's story true as can be."

Hopefully this won't be the last we hear from Passage, or the rest of the Tiger King gang.

More like this
Here’s Everything Coming To & Leaving Netflix In July
By Grace Wehniainen
Police Never Found Enough Evidence To Charge Sharon Marshall’s Killer
By Brad Witter
Bachelor Nation's Blake Horstmann Is Dating 'Love Is Blind' Star Giannina Gibelli
By Jake Viswanath and Radhika Menon
Move Over, 'Sunset'! The Drama-Filled Trailer For 'Selling The OC' Is Here
By Nola Ojomu
Get Even More From Bustle — Sign Up For The Newsletter