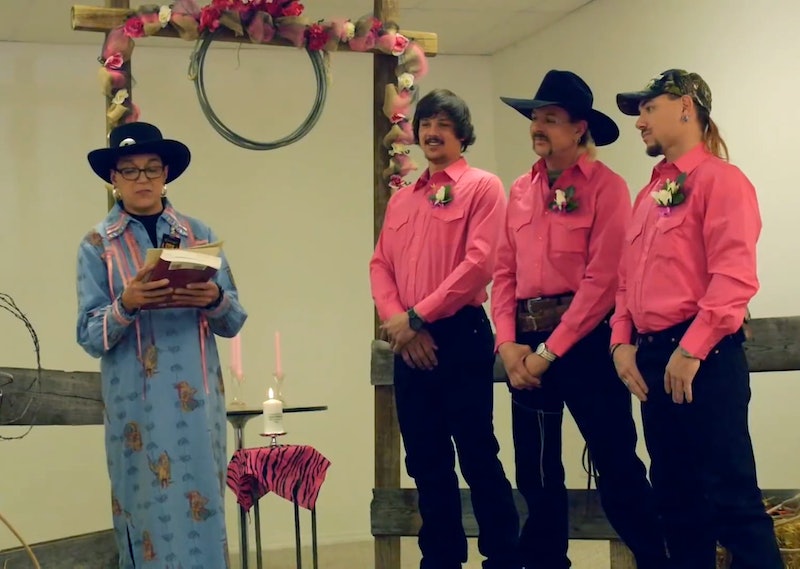 It seems that everyone is addicted to the wild Netflix docuseries Tiger King, which tells the unbelievable story of Joe Exotic, an eccentric, gay, gun-toting polygamist who runs a park that's home to more than 200 tigers, big cats, and other exotic animals. The series mostly focuses on Exotic's feud with Big Cat Rescue founder Carole Baskin, a rivalry that ultimately landed Exotic in prison. But behind the feud story are several other stranger plots, one of the most interesting of which is how Exotic met and married his many husbands. But what happened to Exotic's husbands? Some of them have met tragic ends.

As it turns out, Exotic actually had five husbands, although only three of them are featured in the Tiger King docuseries. Some of which passed away under truly tragic circumstances that add a heartbreaking layer to Tiger King. Here are all of Exotic's husbands and what happened to them, both on and off the show.

Exotic met his first husband while working as a security guard at a gay cowboy bar called the Round-Up Saloon, New York Magazine reports. "[They] shared their bed with a pack of poodles and grew to resemble each other, with mullets and horseshoe mustaches and dressed in jeans and boots. On Saturdays, they would snort pink-tinged meth and go out to the bars. Sundays, they lazed around at home and watched Westerns on TV," New York writes. It was the 1980s, and gay marriage wasn't even close to being legal. Nevertheless, Exotic and Rhyne were married at the same bar where they met.

Rhyne was with Exotic when he opened the Garold Wayne Exotic Animal Memorial Park, the G.W. Zoo featured in Tiger King, and when Joe started collecting his big cats.

Sadly, Rhyne passed away in 2001 from complications relating to HIV. "Joe was loading him into a pickup to take him home to die peacefully, when he breathed his last breath. Joe screamed loud enough to make your ears ring," New York writes.

After Rhyne's death, Exotic got together with a 20-something events producer named J.C. Hartpence, and their relationship was reportedly a volatile one. As Cosmopolitan reports, Hartpence once held a gun against Joe's head during a drunken argument, after which the relationship started to break down. Hartpence is now serving life in prison for a murder he committed years after their relationship ended.

Finlay is one of three husbands featured in the docuseries Tiger King. He started working at the G.W. Zoo in 2003 and, according to the in-depth New York piece, "[he] was a cute little redneck boy who hid his teeth when he smiled; he later grew long rattail-style hair, began taking steroids at Joe’s behest, and became prone to attacks of rage. On one occasion, he threw Joe into a wall hard enough to send him to the hospital."

Maldonado, a "19-year-old meth addict," as Women's Health reports, started working at the zoo in 2013 and started a polyamorous relationship with Exotic and Finlay. As the docuseries details, Maldonado and Finlay both didn't identify as gay. Nevertheless, the three were married as a "throuple" in a ceremony seen in Tiger King. They all wore hot pink shirts, had a tiger-striped cake, and had animals perform during the ceremony.

But not long after their wedding, Finlay wanted out, Texas Monthly reports. "Finlay felt that Joe had become manipulative and controlling. And the park dominated their lives. ... Finlay had seen enough and was ready to leave. It was a messy breakup. On August 18, 2014, Finlay attacked Joe in the back parking lot. He was arrested and charged with assault and battery."

Finlay had also been having a relationship with the park's secretary and gotten her pregnant, as is seen in the series. Finlay left the park to marry her and raise their child together.

Exotic and Maldonado eventually re-married as a couple and got an official marriage license in 2015, Oxygen reports.

Maldonado, however, met a much more tragic end. In 2017, he was hanging around the park's gift shop playing with a Ruger pistol. He removed the magazine from the gun to show that it wouldn't fire without the magazine. Not knowing that there was a bullet in the chamber, he put the gun to his head and pulled the trigger. Episode 5 of the series features the shocking security camera footage of the moment of his death, though thankfully not in gruesome detail.

Joe Exotic's husbands are just one of the absolutely wild and shocking story lines that are a part of Tiger King, but Maldonado's death is surely the saddest.

More like this
At 28, Prue Leith Was In A Secret Affair & Sharing Apple Pie With Stoned Neighbors
By Grace Wehniainen
Everything To Know About Meghan & Harry's Netflix Documentary
By Jake Viswanath
Here’s Everything Coming To & Leaving Netflix In December
By Jake Viswanath
'Love Is Blind' Stars SK & Raven Break Up Amid Cheating Allegations
By Karen Fratti and Grace Wehniainen
Get Even More From Bustle — Sign Up For The Newsletter