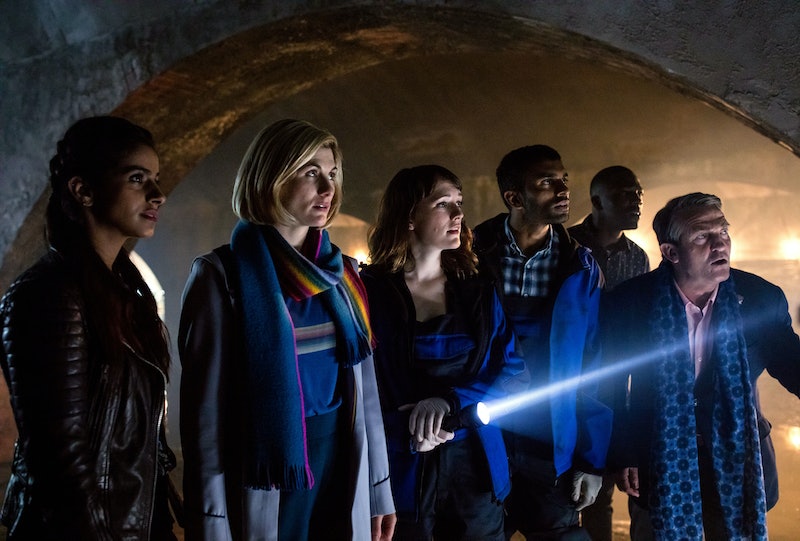 The traditional Christmas TV picks aren't all that Christmassy when you think about it. You tune in with your family to watch the most depressing soap episode of the year, before travelling through space and time and running into all kinds of bizarre mishaps. But at least that drama's better than bickering about Brexit with your relatives around the dinner table. Although, unfortunately, you'll have to find your escape route somewhere other than the tardis this year, as the Doctor's usual festive slot has been replaced. So why isn't Doctor Who on Christmas Day this year?

According to the BBC, it's the first time in 13 years that Doctor Who won't be airing on Christmas Day. Honestly, I'm tempted to say that it's because the Doctor's a woman, but that's not actually the case this time around. The BBC's entertainment correspondent Lizo Mzimba says that the seasonal shift mirrors the show's slot change from Saturday to Sunday evenings, and not airing on Christmas Day might even be advantageous for the episode.

It'll have its place on New Year's Day instead, which Mzimba says is a day that tends to rake in more views than Christmas. Well, would you rather have your show screened to a bunch of viewers who have been drinking for several hours, or viewers that are sofa-bound and hungover? I know which one I'd choose.

Having an episode on New Year's Day also ensures that 2019 won't be a "Doctor Who free year," which Mzimba believes might also have factored into the decision. The BBC confirmed in early December that Jodie Whittaker wouldn't be returning as the Doctor in 2019: instead, it will be back on our screens in early 2020, Radio Times reports.

You probably won't get your usual snowy scenes in this year's special episode, as according to the show's synopsis, this one will be New Year's themed: "As the New Year begins, a terrifying evil is stirring, from across the centuries of Earth’s history." Showrunner Chris Chibnall says the episode will start "the New Year with a bang," while Charlotte Moore, Director of Content promises that "The Doctor's fans are in for a special treat on the first day of the new year.”

For fans who feel really starved of Doctor Who Christmas content, BBC America have offered up — albeit, quite a measly — teaser. Clocking in at only a minute long, this short animated special, which Digital Spy posted on Dec. 18, is whimsical and super kid friendly. Actually, it's just straight up adorable. It's narrated by Bradley Walsh, who plays Graham O'Brien on the show, so you can't go wrong there, either.

This regeneration of Doctor Who is all about creating new traditions, anyway. See for yourself whether the New Year's Day slot is a better home for it, and catch the special on the first day of 2019 at 7 p.m. on BBC One. In the words of the newest doctor: "Don’t be scared. All of this is new to you, and new can be scary. Now we all want answers. Stick with me — you might get some.”