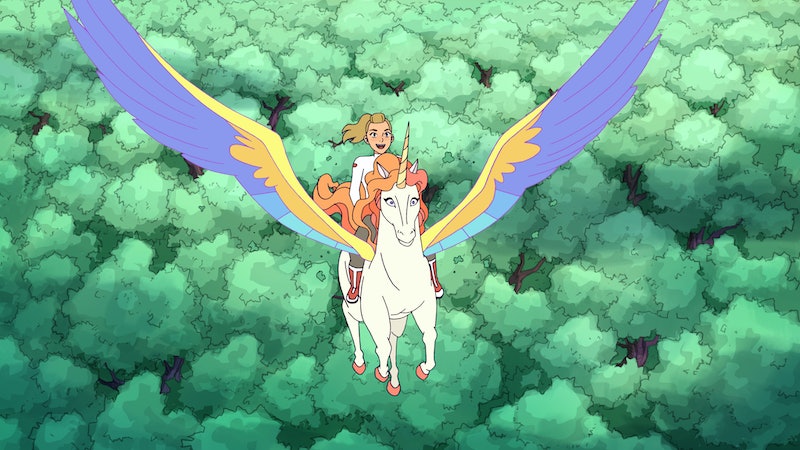 Netflix's She-Ra and the Princesses of Power is a cartoon throwback to a beloved character from the '80s, but older fans may notice a significant Masters of the Universe character missing from her origin story in Noelle Stevenson's new adaptation. Why isn't He-Man in She-Ra and the Princesses of Power? Not to be rude, but like, they don't need him!

When the character She-Ra was first introduced in the 1985 film The Secret Of The Sword, she was discovered to be He-Man's twin sister. He "awakens her destiny," as the IMDb description puts it. Prince Adam and Princess Adora, their alter-egos, were estranged as babies when the Horde kidnapped Adora, magically erased her family's memories, and raised her as part of their evil army. However, while several characters from Secret Of The Sword appear in the new She-Ra series such as Glimmer, Bow, Madame Razz, Catra, Hordak, and Swift Wind — the film's protagonist is not a part of this story yet.

Why? Long story short: the reboot is mixing things up in a good way. This time, Adora is awakening her own destiny.

"This is a world where she's not trying to outshine or live up to the reputation of He-Man," series creator Noelle Stevenson told reporters at New York Comic-Con. "In this version of things, He-Man, [...] we don't touch on him. So that's something that is really exciting to do. We get to set [She-Ra] up as a hero on her own first before we bring in the larger lore and her family and where she's from."

Without giving too much away, Adora's past is as a huge mystery in Season 1. She doesn't know where she came from or why she seems destined to take on the mantle (and sword and tiara) of She-Ra. All she knows is that she was raised by the Horde; they're her family. It's rare enough to have female characters as antiheroes, but the fact that She-Ra is geared towards young girls makes it even more exciting. This show is Adora's origin story — and that doesn't include a man.

"It's also about the responsibility that power brings," Stevenson continued. "It's not just about strength. It's not just about punching — which Adora loves to do! That's the thing she understands. She's like, 'can I punch it? I should punch it?'" She was trained to destroy, but transitioning into a hero who uses her strength and power to protect instead is all part of Adora's journey.

So maybe, in later seasons of She-Ra and the Princesses of Power, a version of He-Man will show up as Adora's long lost twin. Eventually, Adora will want answers as to why the sword chose her and how she came to be raised by the bad guys. Supergirl did ultimately give fans a version of Superman and Clark Kent, but not until it established Kara as her own character with her own hero. He-Man is an extremely popular character, and could eclipse a series that isn't even about him if she showed up so soon. If he ever does, expect it to be a fun and different twist on Prince Adam, that's for sure.