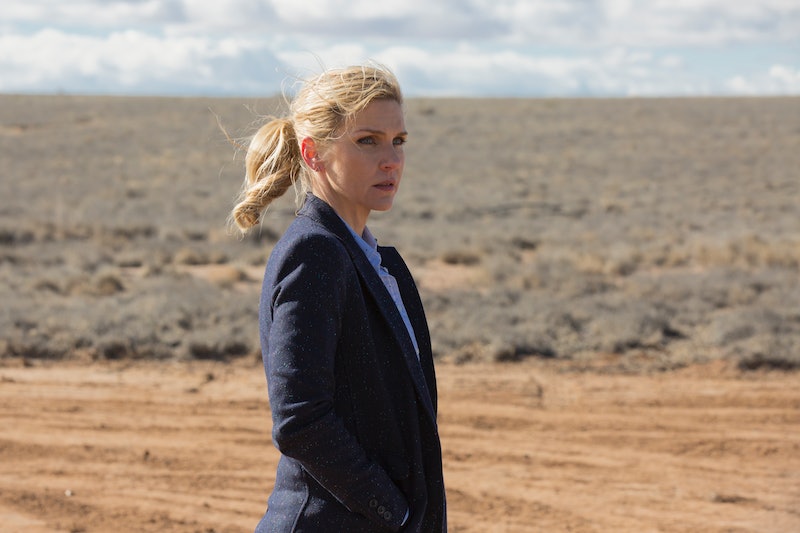 When AMC announced that the creators of Breaking Bad would be returning with a spinoff based around Walter White's lawyer Saul Goodman, the premise sounded a little thin to me. But Better Call Saul has an ensemble cast that has made the series stand on its own. And while it's pretty evident how much changes about Jimmy McGill's life when he transforms into Saul, it's not clear what befalls some of the other characters. For one, why isn't Kim Wexler on Breaking Bad?

Kim and Jimmy are close friends, an on-again, off-again couple, and as of Seasons 2 and 3, have opened up a law firm together (sort of). Clearly, Jimmy cares quite a bit about having Kim's respect, as her influence was what kept him on the somewhat straight-and-narrow path for a while.

According to an interview star Rhea Seehorn gave to TVGuide, Kim's fate on Better Call Saul is still a mystery to her, but she had a few ideas. "I could see realistic, intelligent versions of almost every which way they could go," she said. "I certainly don't think she has to die, but if we're talking about removing her from his life as some sort of over-enthusiastic punishment for him, I don't know [...] It's just as much of a tragedy for something awful to happen to her, and she's no longer there as it is to see Kim lose herself so much that she actually can put up with this stuff."

In Season 3, Kim has struggled mightily with the idea that she received the Mesa Verde case because of Jimmy's sabotage, not just her skills. As Jimmy becomes Saul, he'll only make more morally compromised decisions, so Kim could certainly decide to leave him and their relationship behind. As she explained while interviewing for the Mesa Verde job in the first place, she left her life in a small town "on the Kansas-Nebraska border" because she felt it was hindering her potential. And the car crash she experienced in Episode 9 certainly seemed to rattle her further — that could be what prompts Kim to reevaluate whether or not working with Jimmy is still feasible in the long run.

However, there's another theory floating around online among BCS fans: the idea that Kim Wexler will die. Lots of dramas have killed off major characters in recent years — a trend that Breaking Bad helped kick off, with the surprising death of Gus Fring — but there's a particularly adamant insistence that the only way Kim wouldn't appear is that she's dead. GQ frets that Better Call Saul "threatens [Kim's storyline] with extinction" with every moment it gets closer to Breaking Bad. A Reddit theory from aureliotriste theorizes Kim's line "I should just jump off the roof right now" is foreshadowing a future suicide. And TV Guide recently published a piece with the headline "I Love Kim On Better Call Saul, And She Needs To Die" that argued "by the time Better Call Saul catches up to Breaking Bad, Kim pretty much has to be a goner."

No matter what the fans or the critics think, creators Vince Gilligan and Peter Gould and their team of writers are the only ones who know for sure why Kim's story wasn't told during Breaking Bad... and Gould told Uproxx that he and his colleagues "talk about these things endlessly in the writer’s room," but haven't necessarily landed on a definitive answer.

But whether it's because she's dead, decided to cut Jimmy out of her life, just doesn't get involved with what Walter White will eventually be up to, Kim's fate is still undetermined on Better Call Saul.

More like this
'Broadchurch' and 'I Hate Suzie' Casts Join Forces For Gritty BBC Drama
By Sabah Hussain
Penn Badgley & Leighton Meester Met On A Horror Movie Set Before 'Gossip Girl'
By Jake Viswanath
Conversations With Friends' Endometriosis Scenes Are As Brutal As It Gets
By Ivana Rihter
50 Years After Creating Her Alter Ego, Angelyne Is Still Driving That Pink Convertible
By Gretchen Smail
Get Even More From Bustle — Sign Up For The Newsletter