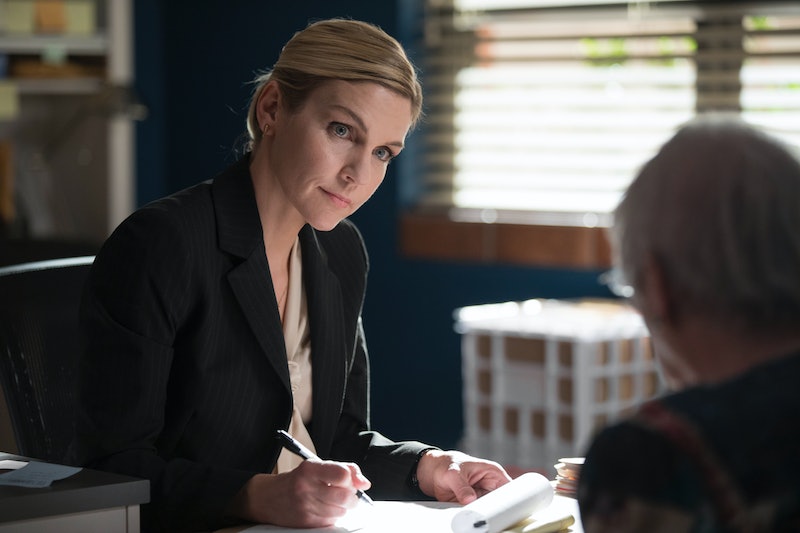 When the character of Kim Wexler showed her independence in Season 2 of Better Call Saul by wanting to work for herself and not becoming the legal partner of her friend and part-time lover Jimmy McGill, it was completely accurate to hail Rhea Seehorn's character as a feminist hero. While Kim is a feminist in the purest sense of the word — as in, she's a person who believes that she is equal to all people, regardless of her gender — perhaps what made Kim in Season 2 of Better Call Saul such a revelation had less to do with her being a feminist and more to do with her being a fully developed and extremely convincing female character. At least, that's what Seehorn seems to think when discussing Better Call Saul Season 3.

In an interview with Bustle, Seehorn talks about how appreciative she was of the plethora of think pieces that were written about Kim being a feminist during Season 2 of Better Call Saul. "I was so flattered by some of the articles that came out — both from critics and fans — about it being one of the most feminist characters on television," Seehorn says. Yet, with Season 3 premiering on Monday, April 10, don't expect the series to be actively following up on this idea of Kim being a feminist.

Instead, Seehorn says the focus of the writers of Better Call Saul is to keep Kim true to herself. "I'm very lucky that I have a staff of writers that are extremely protective of Kim remaining Kim," she says. Because while the interpretations of Kim being a feminist were great, Seehorn says, "I was so excited by the fact that that wasn't at all the agenda and how refreshing and lovely it was that [the writers] simply left out things that normally are just the norm for a female character."

For example? "Like, having a character in her 30s that does not have children and is not married and that doesn't seem to be an issue," Seehorn says. "It's not brought up. It's neither here nor there. It is not the point for her. It is not the issue for her. Nor do we have to have a flashback about how damaged she is to make sure you're OK with the fact that she doesn't have kids and doesn't keep tapping her watch whenever she's around Jimmy."

In regard to Kim's relationship with Jimmy, Seehorn recognizes that their dynamic may be another reason her character is such a breath of fresh air. "I'm very much more the stereotypical 'man' as far as the relationship roles," Seehorn says about Kim. "Jimmy is more emotional, more reactive, wants to talk everything out, and thinks everything is personal and Kim's very project-oriented. Very just, 'Slow it down, here's the problem, here's the solution' kind of thing."

Although Kim and Jimmy's relationship may be unconventional — at least when it comes to TV — Seehorn notes how many people have praised its believability. "I love that people have responded so well to thinking that this relationship seems like a real relationship — albeit with two very strange people that have some major challenges," she says laughing. "[Viewers] believe that this 10-year love and foundation of a friendship and romantic relationship is there, partially because the characters are allowed to argue. And you don't always see a woman being allowed to just be mad and leave the room. Or not make things palatable for the man and I do get to do that." Seehorn also says that Jimmy and Kim's foundation is "not so shakeable that she can't say, 'I'm working, can you just get out of my way?' And it actually makes our hero/antihero smarter and cooler that he loves a woman like that."

While I am in full agreement that Bob Odenkirk's Jimmy is a smarter and cooler person for wanting Kim in his life, Kim wanting to spend her time with Jimmy makes Seehorn's character more interesting as well. Knowing that Jimmy will eventually become the sleazeball Saul Goodman that everyone loved to love in Breaking Bad adds a fascinating layer to Kim's personality. And the people Kim chooses to surround herself with is also a kind of feminist feature of the character.

Seehorn recalls something Better Call Saul showrunner Peter Gould said in a panel discussion that she really agreed with. "[Kim] has turned out to be a feminist character in the great way of feminist characters of the '50s and '60s, like a Barbara Stanwyck," Seehorn remembers Gould saying. "Where women had their own agency and they kept the company of men by choice and not by need."

Kim having her own agency (and eventually, her own law firm) is what led to so many viewers interpreting her as a feminist. Yet, Seehorn sees most of Kim's trajectory as not relating specifically to her gender since she thinks anyone who has worked their way up from lower to middle class can relate. "There's nothing gender-based about working your ass off to try to squeeze into the middle class. And trying hard for a promotion and getting knocked down," Seehorn says. "It's easily applicable to male and female and, thank God, accessible to male and female audience members, that idea of not fitting in."

This desire to fit in is something Seehorn sees as integral to Kim's character. "I think in Kim's controlled facade, there's ... this little edge of trying to pass, trying to fit in. Trying to pass at a big, fancy law firm." Although Kim was one of the only women working as a lawyer at the HHM offices in Seasons 1 and 2 — which is an unstated, but noticeable fact — Seehorn doesn't think her professional pursuits are expressly female.

"Her struggles to me always ring a little bit more like the struggle of what we all face — of trying to fit in," Seehorn says. "Economically, class-wise, education-wise, and to hold your own and to not be found out as other. And I love that part of her that is at once very strong and totally vulnerable at the same time."

This vulnerability comes from a desperation that Seehorn expects to come out in her backstory eventually. "There's a desperation to try to get a foothold somewhere and then not let go. And that says something to me about where she maybe came from and I'm really happy ... that it has nothing to do with being damaged in a way that makes her a female that doesn't fit into somebody else's box. It has nothing to do with it."

The writers and Seehorn may not have intentionally made Kim a feminist character, but it's telling of the current social landscape that a well-rounded female character, who understands her self-worth, prioritizes her career goals, and has complex emotions, is regarded as one of the most feminist TV characters of all time. Yet, that's the great paradox. By Kim's gender not dictating the way the actress portrays her, Seehorn has achieved the pinnacle of feminism — creating a female character who, at least in terms of how she is represented in Better Call Saul, is in every way equal to the men around her.

More like this
Sandra Bullock, Girlboss Extraordinaire
By Matt Harkins & Viviana Olen
Spice Girls’ Net Worth: The Richest Member Is Wealthier Than The Rest Combined
By Hugh McIntyre
Kaley Cuoco & Tom Pelphrey Just Made Their First Public Appearance As A Couple
By Hugh McIntyre
'Ghost In The Shell: SAC_2045' Was Only Supposed To Last Two Seasons
By Kadin Burnett
Get Even More From Bustle — Sign Up For The Newsletter