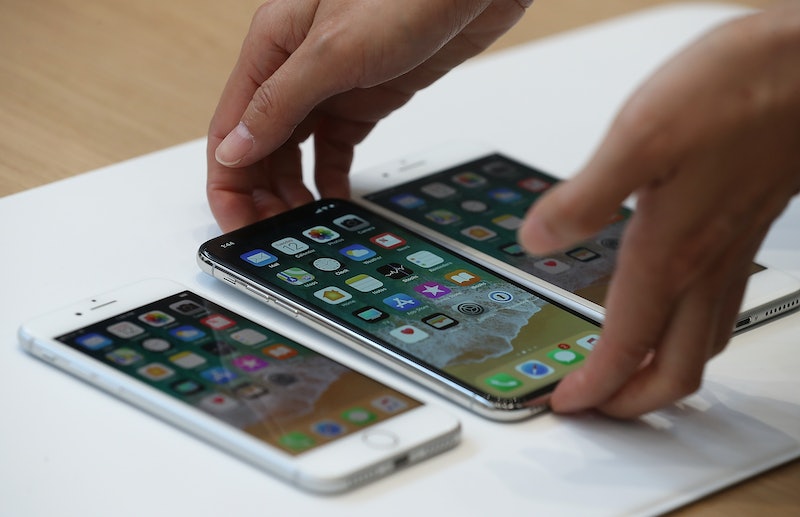 There's a lot of speculation regarding Apple's decision go straight from iPhone 8 to iPhone X, which they pronounce as "iPhone 10." I mean literally, the internet is freaking out over the leap, coming up with conspiracy theories that range from hilarious to grim. And while Apple hasn't released an official statement pertaining to the confusion about what happened to the iPhone 9, there are a few ideas that make sense in a totally non-bonkers way.

First of all, Apple has planned on having a special 10-year anniversary for quite some time, and according to their release pattern, the anniversary was never going to line up with the iPhone 10 release. We just weren't there yet. So one theory is that the iPhone X isn't exactly the same thing as the 10, only in terms of marketing, it has become the same. The "10" in this case refers to the anniversary, not the model — though to avoid confusion among consumers, Apple decided to just go ahead and call the 10-year anniversary phone, the iPhone 10, aka, iPhone X if we're talking Roman numerals.

However, when you consider that Windows went from eight to 10 as well, it sort of makes you wonder if we're all missing something. Do mega tech companies hate the number nine? Is it evil? Is it bad luck? Or is it just a sneaky way for the company to convince the buyers that their phone is way behind if the newest one is two whole series ahead? Chances are, the skipped iPhone 9 is due to a combination of both ideas — it would be too confusing to have a 10 year anniversary phone called the iPhone 9, and it encourages the market to upgrade their phones so as to not get left in to dust.

But who needs logic when you have nutty Twitter theories? Here are a few of my favorites:

The iPhone 9 was so minimalist, they got rid of not only the jack, but the home button and the phone altogether.

What Did The Number 9 Ever Do To You, Tech Companies?

Who decided that number nine was going to be the ghost number? Is it biblical? What gives?!

Don't You Forget About Me

This is the iPhone 9 looking at Tim Cook during the key note all "You know what you did!" a la Lauren Conrad circa The Hills.

Honestly though, we probably would get the iPhone 9 if it came out after the X, because it would probably be amazing anyway.

Finally! An Excuse To Use This Joke!

This joke was literally made for the phantom iPhone 9!

I Smell A New Hashtag Coming

#WeAreiPhone9 for all the outcasts and people who feel like they've been left behind or forgotten.

I dare you not to turn your iPhone 6 upside down. You're too curious. You're going to try it.

Back With The Ex

I don't know, sometimes a step back turns out being a step forward.

You Forgot About Mortal Kombat, Didn't You?

Maybe it's like how some hotels and hospitals skip the 13th floor because it's bad luck? Maybe some people feel the same way about the number nine?

I mean, MAYBE? Do you have a better theory? In other news, is it weird that I'm offended I wasn't invited?

Come on, someone step forward and explain to us what's going on. I know there's a real answer out there. Tim? Anyone?