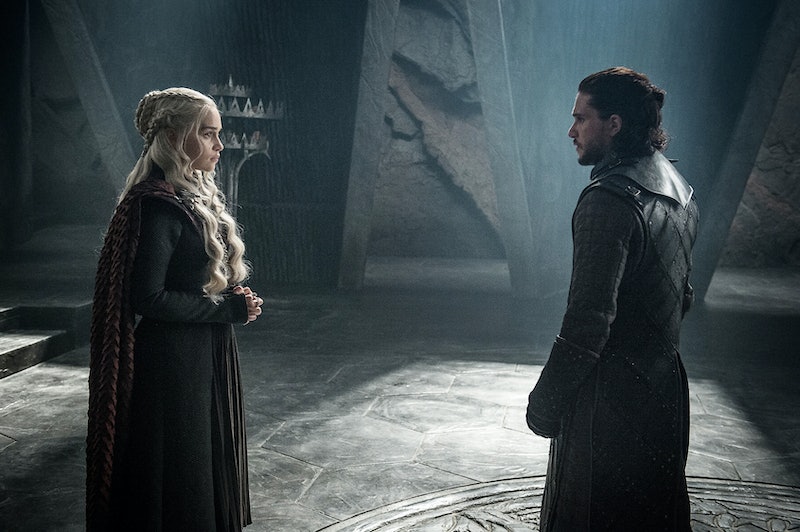 Game of Thrones Season 7 is moving so quickly in its plot developments that it's easy to get caught up in the excitement of it all and forget some crucial plot details. Take, for instance, the growing relationship between the newly introduced Jon Snow and Daenerys Targaryen. It might feel weird to have GoT nudge you towards hoping they get together given that, unbeknownst to them, they're aunt and nephew, respectively. But is it weird to ship Daenerys and Jon Snow on Game of Thrones? I stand firm in my belief that you should actively cheer them on because, hello, they're a real #PowerCouple.

It might feel icky at first to watch GoT and actively root for Daenerys and Jon Snow to get together, despite the fact that they're two of the most eligible singletons in Westeros. That feeling comes from the knowledge that Daenerys is the aunt of Jon Snow (his dad was her oldest brother), a fact neither of the leaders knows at this point in Season 7. Add that to your inner monologue continuously asking "Doesn't GoT already have more than enough incest with Jaime and Cersei Lannister sleeping together and producing three children together?" It's hard to advocate for any behavior that Cersei herself has been a proponent of.

But the crucial fact that should help restore some normalcy, or at least some context, to this potential pairing is that it's actually very typical for two Targaryen relatives to get together romantically. Daenerys' parents were brother and sister. Targaryens have practiced inbreeding for so long in their bloodline that it's actually unusual that Jon Snow's dad, Rhaegar, had a child with a non-Targaryen woman. In a world that is both futuristic and medieval, that has it's own very strange and specific customs and traditions, mating with blood relatives is not the crime or taboo that it is today.

To this point, you could also argue that within the range of morally- and ethically-complex issues in GoT, it doesn't rank comparatively high on the reprehensible scale for an aunt and her nephew to get together. To be clear, I'm not advocating for the actual practice of incest in modern times. I'm simply saying that within the fictional, fantasy realm of a show where one family has an established pattern of practicing incest for genetic purity (and where a precedent for incest has been set by other fictional characters), it's not unforgivable for two relations who are a few branches apart on the family tree to marry each other.

Another damn good reason to ship Daenerys and Jon Snow: Don't we need a love story right now? Why ruin the one truly silver lining in this otherwise very grim season? They're practically made for one another: both are strong leaders, visionary in their politics and their world views, they command the respect of others, and it's becoming clear that they have a growing soft spot for one another whether or not they want to admit it. Never mind the fact that they're probably fated to fulfill major GoT prophecies and basically rule the earth together.

I get that it's very odd to some people to root for two characters to get romantically involved when the ties that bind them happen to be blood relations. However, if you can find individuals who are better respective matches than Jon and Dany, by all means. Until then, I'd encourage you to let yourself ship this duo.