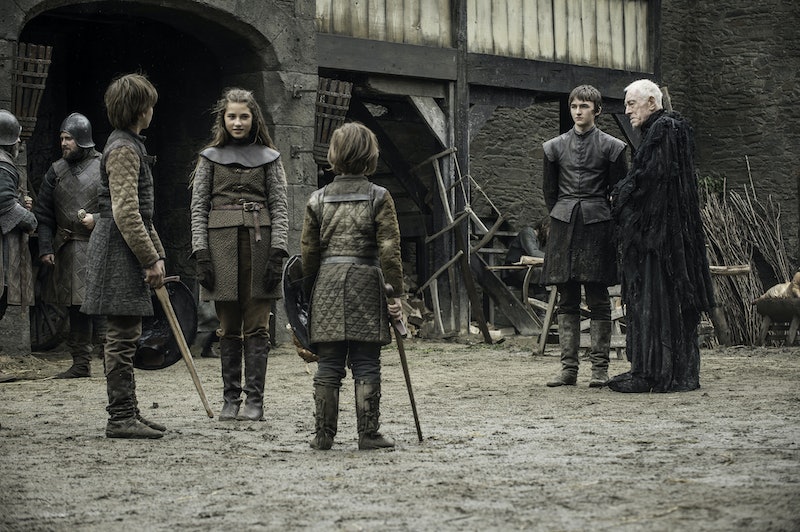 Now that Jon Snow is alive on Game of Thrones — I'll never tire from saying that, even if he literally drops dead again in two episodes — what's next? Sunday's episode seemed to be throwing lumber on the fires of several fan theories about Secret Targaryens with Lyanna's appearance, Jon's resurrection, and Tyrion's ability to have a conversation with two dragons without getting scorched. In that spirit, what does Jon Snow being a Targaryen mean for Game of Thrones , if that really is the case?

Let's say that everything really is happening now and that after having woken up, Jon Snow will imminently learn that he has Targaryen heritage because his mother is Lyanna Stark and his father is Rhaegar Targaryen. What could he do with this information? Because, like, here's the thing. Jon Snow being Jon Targaryen is not necessarily good news — especially if you're a Daenerys fan. Be careful what you wish for!

Jon could totally one-up Daenerys' Anastasia Romanov plan, if he wanted. More like Tzargaryen, am I right? Both of them are long-lost descendants of an overthrown ruler. Daenerys is the Mad King's daughter, but succession goes to male heirs first in Westeros and Rhaegar was her older brother. As the Mad King's nephew, Jon would be rightfully next in line if he were to be legitimized as a Targaryen. Of course, who is going to legitimize him? Not Dany, that's for sure.

The other potential outlet for Jon's equally potential Targaryen-ness is dragon riding. If he has Targaryen blood, he could probably ride a dragon. That would be pretty epic and likely to make the White Walkers shake in their snow boots, don't you think? Now that Tyrion has unbuckled Viserion and Rhaegal (hmmm interesting name), one of them could make his way North.

Daenerys and Jon could, additionally, fall in love and get married. I feel like I've heard rumblings that people want that. By Westerosi standards, the fact that they are aunt and nephew (and only about a year apart in age) is hardly even incest. They would have to meet first, presumably. Chemistry-wise, that's also a weird fit. I honestly don't think that the two of them would get along at all, but I'm willing to be proven wrong. It is a "song of ice and fire," after all.