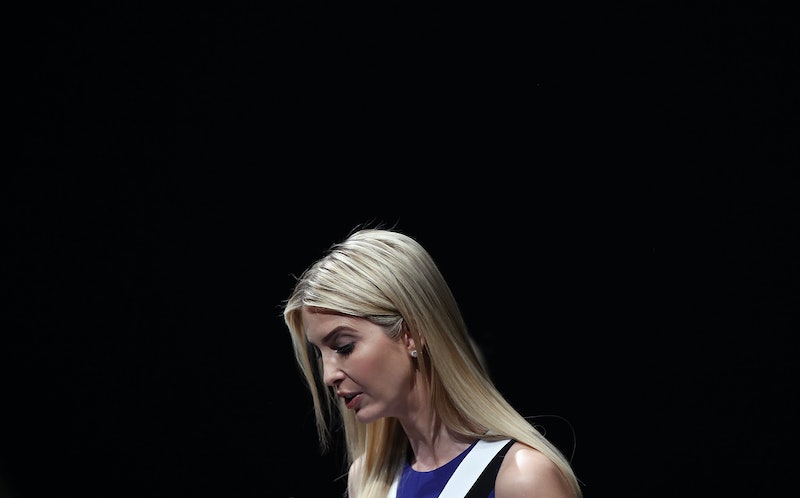 The world is holding its breath this Friday in the wake of the United States' missile strike against Syrian President Bashar Al-Assad's regime. Despite years of involvement in Syria's ongoing civil war, the move is the first direct military action against Assad. The new development has millions on edge about whether the strike was the right call, but those closest to Trump are sticking by the president. Ivanka Trump's response to the Syrian missile strike was supportive of her father, but it raises serious concerns about the administration's reasoning behind the strike and whether its potential repercussions will be worth it.

"The times we are living in call for difficult decisions - Proud of my father for refusing to accept these horrendous crimes against humanity," Ivanka tweeted Friday morning, along with a link to Donald Trump's statement regarding the strike. What Ivanka didn't mention in her tweet is that the missile strike killed nine people, including four children, begging the question of what exactly constitutes a "horrendous [crime] against humanity" to the Trump administration. Is it only when Syrians do it? What makes the United States any different? The scariest thing is that the American people have no idea, because the Trump administration hasn't yet offered a full justification for the strike.

In his statement announcing the missile launch, Trump said that "no child of God should ever suffer... horror" like Assad's gas attack. Yet Sean Spicer, in his press briefing on Friday, didn't offer any explanation of how this "justified and proportional" response is somehow morally permissible when Assad's actions were not.

Ivanka, as the most vocal and visible member of the senior staff, then automatically assumed the responsibility of speaking for the White House in general by tweeting about it. She just gave one of the only available insights into the administration's rationalization for the strike, and it's terrifying. It signals that Trump and his team don't recognize a similar effect in their own actions, or really have an understanding of how their retaliation may not be different than what they're condemning.

While the Syrian gas attack undeniably killed more people in the name of an socially oppressive regime, the merit of Trump's retaliatory strike is still unclear. It's easy to paint the United States in an exceptionalist light (the nation has centuries of practice) and say that the attack was righteous, but that claim doesn't do anyone justice.

The American people deserve to know exactly why the administration thought this missile launch was the right course of action, because if this is leading to an increase in the nation's involvement in the conflict, average Americans are the ones who are going to be making the biggest sacrifices for it.