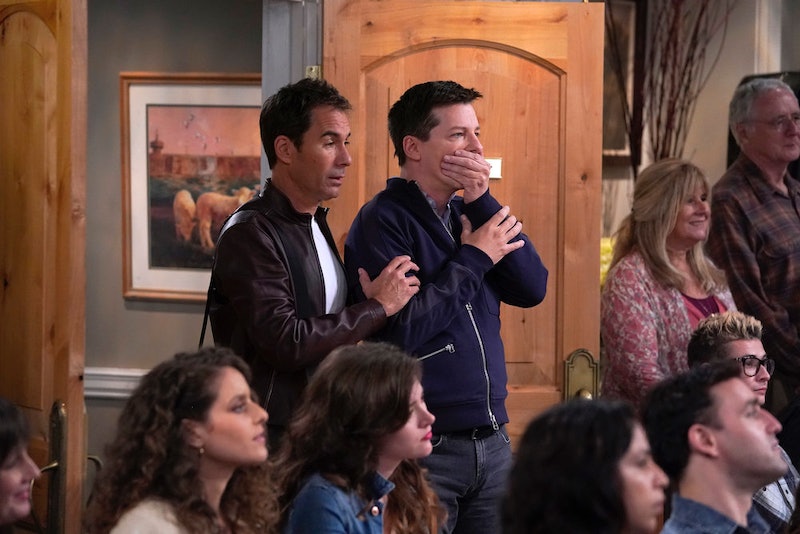 Since coming back on-air in 2017, Will & Grace has taken several bold new risks: fantasy dream sequences, honest political discussion, and a whole lot more of "serious" Karen. Just about every one of these risks has paid off, but there is one storyline that Season 10 seems to be teasing that should never, ever come to pass. A Will and Jack relationship is the last thing that this still-progressive show needs to happen. There have been several hints that the two characters might actually belong together, and the most obvious one yet came in the Jan. 31 episode, "Family, Trip." But pushing Will and Jack into each other's arms would do a huge disservice to the legacy that Will & Grace has worked so hard to build.

In "Family, Trip," Will and Jack wind up accidentally taking some psychedelic drugs that Will's students left in his apartment, as they thought it was chocolate milk. They end up on a wild trip full of hallucinations and drug-induced realizations — the main one being that they are actually each other's soulmates.

This isn't the first time the revival has teased the possibility of Jack and Will getting together. In the Season 9 finale, Will told Jack that he once entertained the possibility of a romance with him when he saw him standing out on the balcony. "That's a face I could love," Will said. But in the end, just as in Season 10, Episode 2, the two arrived at the conclusion that they were better off as friends.

Although Jack and Will might have a lovable dynamic, putting them together romantically would undermine what made the show so revolutionary in the first place. Not only did it feature two gay men as main characters, but it showed them maintaining a healthy friendship with one another that defied the most common stereotypes of gay men. Linking them romantically simplifies their rich and complicated history, and undermines the cultural legacy that Will & Grace helped build in the first place.

The show's ninth and 10th seasons have spent a lot of time allowing Jack's character to develop beyond how he had in the original series, and with it, his relationship to Will. They have an important friendship — one that is almost as central to the story as Will's relationship with Grace. If all of that turns out to have been a set up for them winding up together romantically, it will have done a disservice to the story that's been told so far.

In the show's original run, there were multiple moments that hinted there could be something more between Will and Grace than friendship, even after it was revealed that the pair used to be a couple. By the end of the original run, though, those inklings never came to anything but reinforcing the titular characters' platonic love for one another.

The revival is clearly trying to establish a similarly deep connection between Will and Jack, which does indeed seem long overdue. But without knowing exactly how this new run will end, it's a bit nerve-wracking to consider the possibility that Jack and Will could end up together in the end. It would be a cheap ploy for a show that has always been so rich in heart. Hopefully this teasing will end the same way it did in this last episode: with the affirmation that Will and Jack are lifelong friends, and that is more than enough.