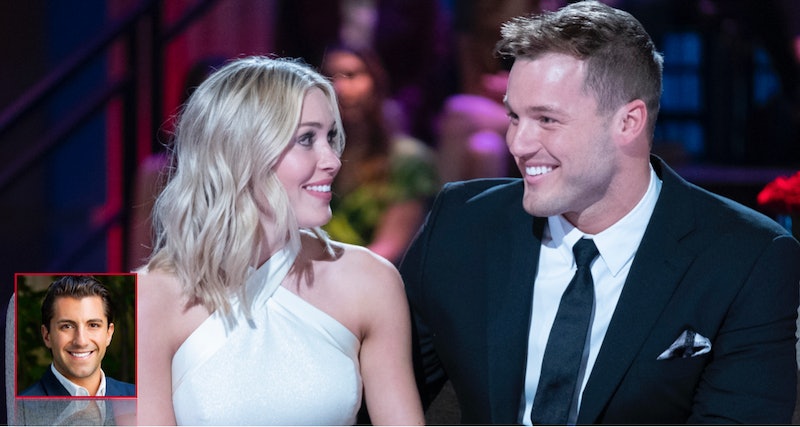 While competing on Becca Kufrin's Bachelorette season, Jason Tartick experienced love and heartbreak on national television. Now that he's been through it all, he has plenty of words of wisdom for new contestants, and he's dishing all to Bustle. Read what Jason has to say about Colton's dramatic season finale as The Bachelor in this week's recap.

In the 23 seasons of The Bachelor and 14 seasons of The Bachelorette, we have never seen an ending quite like this. This two-part finale really struck me to the core in so many places. While watching, I was empathetic for Tayshia when she was blindsided at her hotel room. I had been in Hannah G.'s shoes and I was disappointed her time was cut short without her getting the proper closure. I could sympathize with the authenticity of Cassie's confusion, given the commotion of this journey. And I experienced goosebumps and tears at the pain Colton was enduring. It was an ending I never saw coming, but it was a conclusion we can all learn from.

This finale was a refreshing reminder to all of us that The Bachelor is so much more than television entertainment; it was a pure representation of someone following their heart at all costs. Colton started this journey with 30 women, and in following his heart he put himself in a position where every one of them eventually went home. Colton was determined under any circumstances to pursue his love to lead to the life he envisioned.

Tayshia and Colton’s heartbreak really affected me. I do believe that Tayshia’s intuition was likely expecting a breakup. Their day and night date was adorable, but it was clear in the morning in the fantasy suite that the “it” factor was missing. This was difficult to watch, because so many of us have been in a relationship predicament like this one, where you’re in love, yet your intuition tells you the end is near. But nothing can really prepare you for when the reality of the situation comes to a head.

Moreover, I really believe Tayshia was the MVP of this season. She handled herself with grace and class. Even tasked with the unique challenge of dating on a TV show, she still allowed herself to be vulnerable and open. And in almost every instance of conflict, Tayshia took the high road. She should be proud of how she handled herself and confident this experience will only put her in a better position to find happiness.

As the season concludes, I have to say I just feel disappointed about the end of Hannah G.’s journey. We saw an intimate connection between her and Colton, but I feel as though we just didn’t get the whole story. I didn’t hear enough of her background and why she was there. I could witness their chemistry, but there wasn’t enough of their time shown to emotionally connect to their relationship and see why they were both so enamored with one another. Hannah G. was clearly devastated when Colton broke up with her, but she also seemed angry. And I really felt for her. Hannah G. put it all on the table and gave Colton everything she had, and she should be proud of herself for that. I wish her happiness, and I have confidence she will find that special person who will jump fences for her!

When Cassie broke up with Colton, I was devastated for Colton, but I could relate to the impact this journey can have on one mentally. It’s much more exhausting than viewers might imagine. Many people saw a Cassie who just wasn’t “that into” Colton. But I saw a genuine person falling in love who was caught up in the emotional craziness of being on a show like The Bachelor. I saw someone who was conflicted in her relationships with the other girls, the show's expectations, and the expectations of her family.

I believe Colton saw the exact same thing. He said it himself; his instincts were insinuating that Cassie loved him. And I applaud Colton for pursuing his gut and instincts. He fought for love at the costs of everything. He pursued the answers that his heart needed to find direction. And he put everything on the line for the person who he was convinced is his life partner and best friend.

It’s clear that Colton isn’t capable of loving more than one person. As his close friend, I am so happy he found happiness with the one he was capable of loving. Although it was quite the unorthodox season, it was also one of the best ones yet. So congratulations to Colton and Cassie: I’m so excited for your future and anxiously awaiting your engagement party, bachelor party, and hopefully, your wedding!