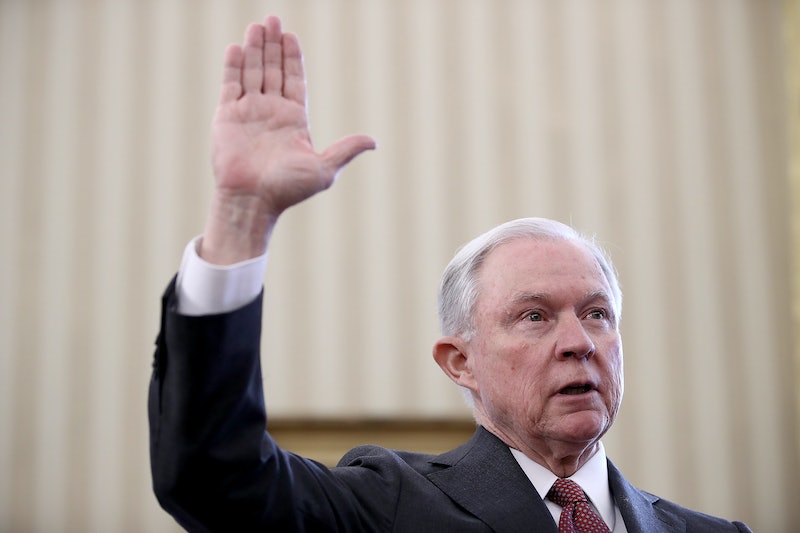 When the Senate voted to confirm Jeff Sessions as Attorney General, despite major outcry from many members of the public, protest from the Democrats, and grave concern from a number of civil rights groups, my heart sank. For a lot of reasons — like the fact that allegations of racism have been present throughout his career. Or his history of prosecuting civil rights activists, attempting to overturn the Voting Rights Act, opposing key hate crime legislation, and making negative comments about disabled people, including that laws that ensure disable students' right to education “may be the single most irritating problem for teachers throughout America today.” But there's another reason Sessions' confirmation is chilling: it has huge implications for transgender Americans.

Under the Obama Administration, the Department of Justice became our friend and ally — Attorney General Loretta Lynch, for example, aggressively opposed North Carolina's transphobic HB2, which sought to keep trans people from being covered by anti-discrimination laws. And the Obama DOJ wasn't just a friend to the trans community; it was also a civil rights warrior, taking on issues like police violence, voting rights, and disability rights. Many transgender Americans took heart in support from the government and the community around us and began to come out into the open — and now, some of us are about to pay a heavy price.

Sessions' record suggests he is not invested in upholding the civil rights that should be enshrined in law, which is bad news for many Americans, including the trans community — in part because our civil rights were built on a shaky, fragile framework to begin with. Sessions' confirmation feels a lot like venturing outside after a storm without an umbrella because you see blue skies overhead, only for the sky to start abruptly dumping hail.

The problem with Sessions and the trans community is twofold: His record suggests that he does not support the rights of trans people, which is not a good thing to have in a federal official, particularly one charged with enforcing civil rights; and the current political climate suggests that a growing number of states will be passing transphobic legislation that, under normal circumstances, the Department of Justice would be challenging. Under Sessions, this seems unlikely. Which is very, very scary.

We count on the Department of Justice to protect us when states overstep the bounds of the Constitution, but what happens when the DOJ doesn't believe in defending constitutional values?

We count on the Department of Justice to protect us when states overstep the bounds of the Constitution — but what happens when the DOJ doesn't believe in defending constitutional values?

During his confirmation hearing, Sessions tried to dodge around a lot of questions surrounding trans issues, so what we do know is a combination of gleaning from his voting record and what he let slip during his hearing.

For one thing, he opposed the Violence Against Women Act (VAWA), which specifically covers transgender people, something quite unusual for federal legislation. Which agency remains responsible for issuing clarifying guidance on these issues? The Department of Justice, of course.

Sessions also opposed the Employment Nondiscrimination Act (ENDA), which would have extended specific protections to transgender people had it passed — in the majority of states, we can be fired for being trans. He also opposed hate crimes legislation, saying that he felt gays and lesbians are "openly able to advocate their positions today," drawing upon the "lifestyle" rhetoric used on the right as he suggested that LGBQT discrimination doesn't exist.

It's not just that Session doesn't advocate for laws that offer protections for trans people. In fact, he works for the opposite. He's supported the First Amendment Defense Act (FADA), a virulently anti-LGBQT piece of legislation that would effectively legalize discrimination against LGBQT people behind a shield of "religious belief or moral conviction."

Conservatives have vowed to reintroduce FADA and the president has pledged to sign it if it is passed by Congress, which means that soon, Sessions will likely be faced with situations in which he's expected to defend the law against challenges, as is his responsibility as Attorney General.

Our lack of legal protections means that Sessions can claim he doesn't have a specific mandate to defend us. That means that when states engage in discriminatory practices, he can decline to pursue them using the limited tools that are available, like Title IX, as the Obama-era DOJ did.

This highlights the fact that in Jeff Sessions, conservatives have very effectively executed a pincer move. They've placed a trans-hostile Attorney General at the head of the Department of Justice, ensuring that they'll have someone to back them up on FADA, which some commenters have noted may violate the Constitution — but they've also provided assurance and comfort to conservative states that the federal government will likely not come after them for writing anti-trans legislation.

We are left with nowhere to turn — we can't rely on federal law to protect us because it largely doesn't exist, and a trans-hostile DOJ won't interpret existing legislation, regulations, and caselaw as broadly as possible to help us when our states turn on us. This is a situation where federalism is going to have a huge impact on the lives of millions of Americans — not just trans people but LGBQ people, people of color, Muslims, disabled people, and others in marginalized groups. Either our states are going to think that defending us reflects our collective cultural values, or not — and if the answer is "not," the federal government may decline to act, and could even cheer lawmakers on as they pass discriminatory legislation.

I'm terrified of what Jeff Sessions means for so many people across the U.S., and I seethe with frustration knowing that the trans civil rights victories we viciously fought for over the last eight years are in the process of evaporating.