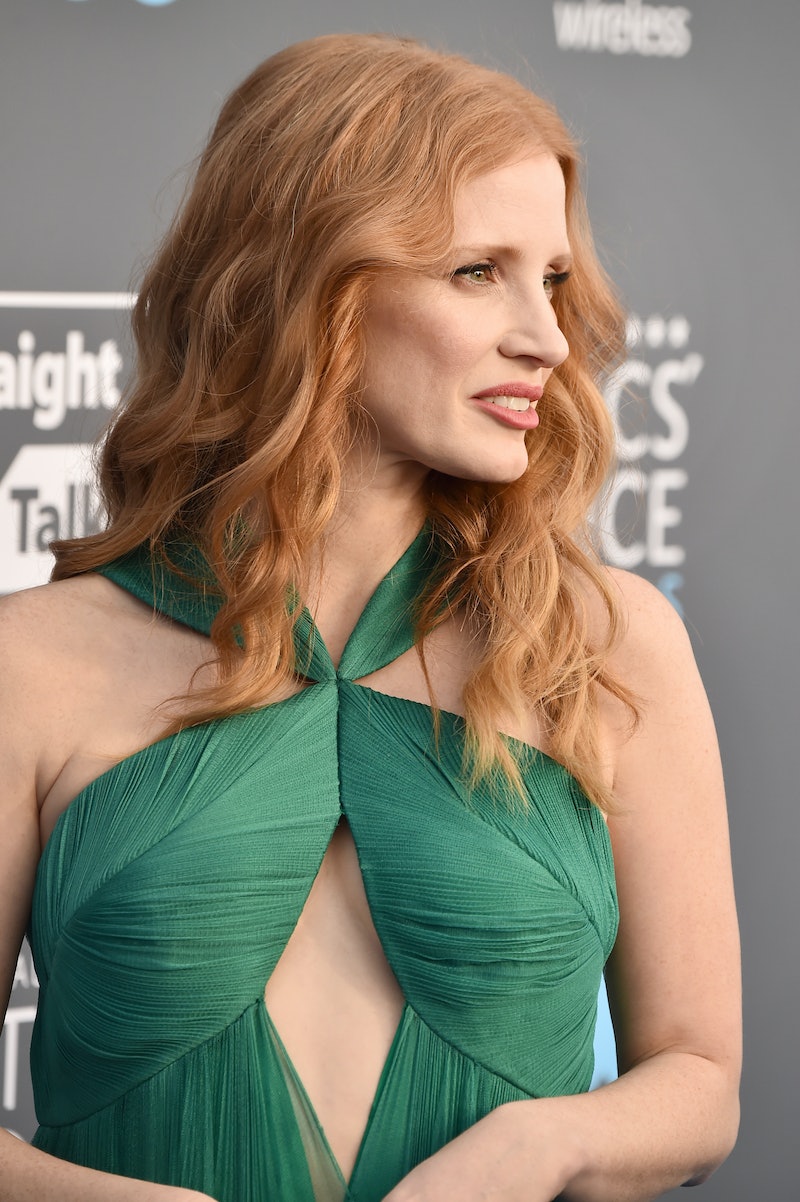 These days it can feel impossible to have any kind of conversation with someone who doesn't share your political views, and it can be hard to sympathize with people you don't agree with. There is a way to open those difficult conversations, though. After a woman left a critical comment on one of her Instagram posts, Jessica Chastain ended up giving her $2,000, and the exchange that led to the actor's donation proves that there is a way to open up those difficult conversations. Based on this story, it looks like empathy is a key factor here — in order to really hear someone's view, you have to understand where they're coming from.

In Chastain's case, the Academy Award-nominated actor posted a seemingly non-controversial photo for International Women's Day. In the image, she wears a "We should all be feminists" T-shirt. "FEMINISM: the theory of the political, economic, and social equality of the sexes #happyinternationalwomensday," she captioned the Instagram post.

Chastain's International Women's Day post wasn't without its critics, though. One woman, Karin Hallsten Schulz, commented, "Yes, feminist that believe in God and stand up for The Unborn. I would be for that kind of feminist."

Many people, famous or not, probably wouldn't give a comment like this a second thought, but Chastain decided to learn more about Schulz and what inspired her comment. A visit to Schulz's Instagram handle leads to the link to her GoFundMe page, where Schulz is raising money for fertility treatments. As she explains on the site, she and her husband had wanted children since their 2015 wedding. They underwent fertility tests, and Schulz wrote that her "hormone levels and egg quality aren't the best, due to my age."

"We found out that we would need help to become pregnant. It was very disheartening to hear these results. I felt like I had failed Jeremy," Schulz wrote on the GoFundMe page. "The idea of having us to go into debt to become pregnant made me so, so sad. It is hard to know your body doesn't do what it is supposed to do."

The couple created the fundraising site, asking for $5,000, because their insurance doesn't cover infertility treatments, Schulz explained on the site. They've now raised $3,290 of that goal — $2,000 of which came from Chastain.

The actor responded to Schulz's original Instagram comment, wishing her well with the fertility treatments and noting her stance on abortion. Here's Chastain's Instagram response to Schulz:

"Yes you can decide what is right for you. I am pro-choice and I believe that everyone has the right to make their own decision. I read about your journey to become a mother and it broke my heart. I hope that your dream will come true in 2018! Much love to you ❤"

A scroll through the donations list on Schulz's GoFundMe page shows the $2,000 donation from Chastain, with the comment, "You'll be wonderful parents who teach love by example. Someday you'll hold your baby. Don't give up ❤" And the story really came full circle because of Schulz's response to the donation. She left a followup comment on Chastain's Instagram post:

"Dear Jessica. Thank you for your words, for your encouragement and loving wishes. I too am a feminist!! It is ok if we don't see eye to eye on everything. We do agree on more than we disagree!! You are my sister, and together wonderful change and more awesome things will happen in this beautiful world we live in. Love Always Karin."

She also posted the following, along with a note that she had DM'd Chastain:

Thank you so much Jessica. Thank you for believing in my dream.

Whether or not you agree with Schulz's definition of feminism, her back-and-forth with Chastain shows that it is possible to change the conversation and empathize with someone who holds opposing views to your own. Chastain's generosity, as well as Schulz's response, show that it's possible to get along with someone and have these open conversations, even if you don't see eye to eye.