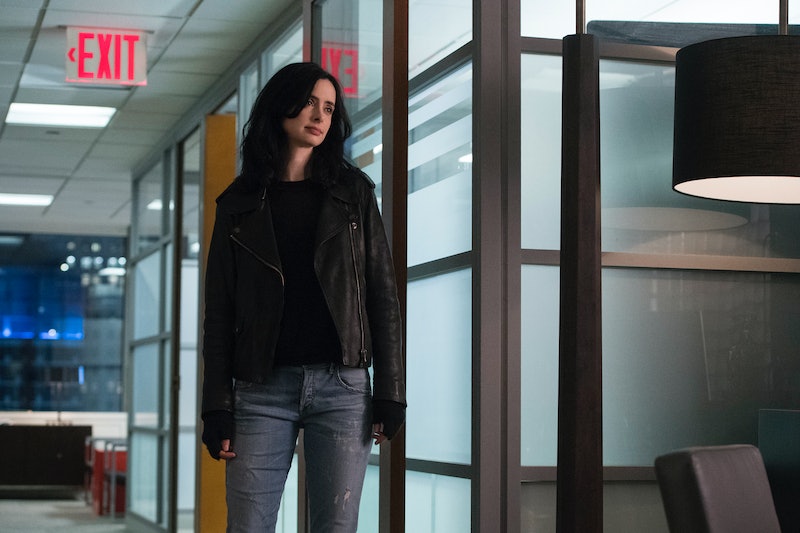 Jessica Jones still doesn't want to be your hero. After her own first season and the eight-episode Marvel team-up The Defenders, the private detective is known — inside and outside the world of the show. And while the 13 new episodes dropping on Netflix on Mar. 8 will no doubt give her plenty of opportunities to use her self-destructive determination and super strength for good, she's "just as much of an asshole as ever" in Jessica Jones Season 2, according to star Krysten Ritter. And it's that undeniable fact that continues to distinguish the Netflix series from other rape survivor narratives.

And at its core, that's what Jessica Jones is. In Season 1, she faced off with her abuser (David Tennant), whose unsubtle chosen name Kilgrave was the target of a few of her wisecracks. Jessica was under Kilgrave's potent mind control for a period of her life — a heightened interpretation of the loss of identity and power victims experience in abusive relationships. And it's made explicit that his power over her included forcing her to submit to him sexually. At the end of the season, Jessica kills him. But it's not revenge for what he did to her.

"I think that she really questions who she is, because she was capable of murder," Ritter says, speaking over the phone before the Season 2 premiere. "That was not what Jessica wanted to do, obviously. She spent the entire season trying to bring him to justice. It wasn’t until it was entirely a last resort to save other people. So I think that Jessica really struggles with that — doing the right thing versus being a cold-blooded killer."

So though you may have stood up and cheered when Jessica snapped the neck of perhaps the most disturbing and patriarchal villain in the Marvel canon, the moment was not a triumphant one for her. Jessica is out from under the thumb of Kilgrave the person (or perhaps not, considering Tennant is due to appear in Season 2), but the memory still weighs on her. "All that stuff doesn't go away," Ritter says, ruefully.

And in fact, it's added to her litany of mental and emotional issues. In the first five episodes of Season 2, Jessica is still drinking to excess, living in near-squalor, and basically hating herself. "She's in a dark, dark headspace," the actor explains. "And kind of dealing again with her PTSD, but dealing with some rage as well."

In one stand-out scene, Jessica attends an anger management group. And, as you may have guessed, she's not exactly the most willing therapy participant. Jessica can't think of any valid reasons why she shouldn't be full of rage. Ritter points out that the good that Jessica does is always for other people, whether that's a client like Season 1's Hope Slottman or her childhood best friend Trish. She's not trying to get better, because deep down, she doesn't care to. Or maybe she doesn't believe it's even possible.

"She doesn’t want to look inward," says Ritter. "Jessica is not a self-care kind of girl."

Jessica Jones Season 2 doesn't show audiences the speedy recovery process that they may be used to seeing on other TV shows. Jessica's continued unhappiness means that the series isn't in the business of handing out easy solutions. The Punisher Season 1 was successful at this too, offering several different depictions of PTSD amongst Frank Castle and his fellow veterans. Ritter has some ideas about why a comic book adaptation set in the same universe as the Avengers movies is able to be gritty, thoughtful, and real when dealing with mental illness.

"I think that’s why it resonates with people, because we’re not taking the issue and making broad statements about it," she says. "We’re just looking at the character and how she exists in the world and how her issues and her depression and her self-loathing affect her day-to-day life."

It's not necessarily fun to watch Jessica still struggling, still clueless as to why people like Trish and Malcolm are so intent on loving her. But it's a relief that her abuse by and eventual victory over Kilgrave didn't result in a personality transplant. Rape has been portrayed as a transformative act in extremely problematic ways, particularly in soap operas. But Jessica's rape didn't flush out those demons or even make her want to take better care of herself. That little bit of growth that's apparent in these new episodes isn't a result of how she was violated; it's a result of how saving other people and opening her life just a tiny bit to them made her feel.

In these ways, Jessica Jones Season 2 is an absolutely necessary successor to that brilliant first season. As cathartic as the finale was to watch, Jessica's life didn't magically right itself once Kilgrave was gone. Recovery is about the daily battles, not a singular moment of retribution. In every way, this character is resistant to those happy, bow-tied endings that trivialize what real survivors have been through, and that's just one reason to be glad that Jessica is back.

More like this
At 28, Tisha Campbell Was Newly Married & Dancing Through A Career Pivot
By Grace Wehniainen
At 14, Melissa Barrera Was Planning Her Quinceañera & Falling In Love With Musical Theater
By Gabrielle Bondi
Gabby & Rachel Reveal How That 'Bachelorette' Rose Ceremony Twist Happened
By Grace Wehniainen
'The Sandman’s Ending Is A Departure From Neil Gaiman’s Comic Book Series
By Kadin Burnett
Get Even More From Bustle — Sign Up For The Newsletter