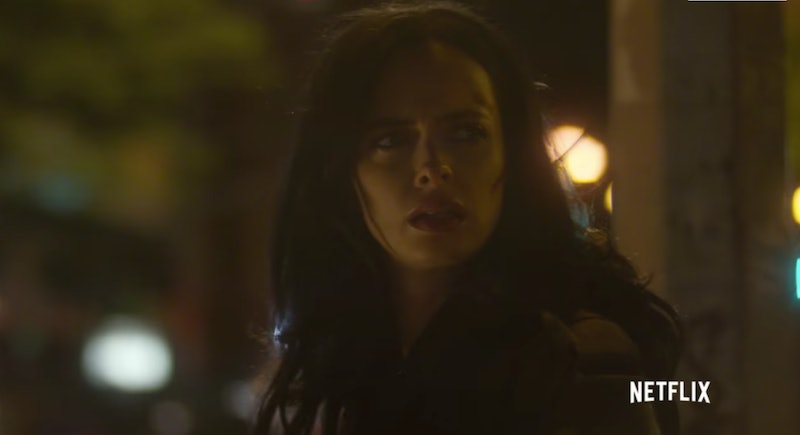 The first official sneak peek of Jessica Jones Season 2 proves that the series continues to remain ahead of the curve when it comes to tackling and spotlighting issues that are important to women. It's a narrative that feels particularly timely now, more than ever, due to the sexual abuse pandemic that has seemingly engrossed the entire entertainment industry in recent months. Sticking to its commitment of addressing and highlighting those sensitive subjects, Jessica Jones will attempt to keep the discussion about those topics going in its forthcoming season.

The show, which received praise for its coverage of topics such as rape, assault and trauma during its Season 1 run, will pick back up right where it left off, showcasing the traumatic nature of Jessica's abuse. And although subjects such as these are nothing new for the Netflix original, new details about Season 2 indicate that things will get much more emotional for the character in the Marvel drama's return, according to details shared by Entertainment Weekly.

A photo from the forthcoming season seemingly reveals a moment in which Jessica will come face-to-face with the torments of her past. The snapshot, which features the private investigator standing beside the very man who abused her both mentally and physically for so many years, provides insight into exactly what Jessica will face in the new season. It's immediately unclear exactly how Kilgrave (portrayed by David Tennant) has returned to the fold after being killed off at the conclusion of Season 1, although it is extremely evident that his return will most certainly wreak havoc on Jessica's psyche.

In terms of other elements that loom to threaten Jessica's mental state, it is revealed that fans will be privy to more of the character's dark background with the show attempting to dig "deeper into this chaos," show runner Melissa Rosenberg revealed in her sit down with EW. Actor Krysten Ritter also shared harrowing details about the character's anguishing Season 2 dilemma during the interview. She explains,

“Jessica is in a pretty dark headspace when we meet her at the top of season 2. What we’ve done again is kept the story very personal. If season 1 was in her head and in her mind, then this season will be more in her heart. It’s still a psychological thriller, but it’s more of an emotional thriller this time.”

Pointing out the show's culture and dedication to creating an environment that supports women, both Ritter and Rosenberg take pride in the power of Jessica Jones' feminist leadership. Ritter explains,

"We have a really unique situation where our show is all women, the main character’s a woman, it’s written by a woman, and even when the crew comes in, they always make comments about how different our energy is on set… There’s a real, feminine power to our show that is noticeable, I think."

It obvious that others in Hollywood could take some pointers from the web series which will make its second season premiere in 2018.

The show has become a perfect example in terms of creating an environment that is safe and productive for women on both sides of the camera. Rosenberg adds,

"It’s affirmation. It’s an example of how [Hollywood] can and should work. I mean, I knew that for myself personally, but for everything that’s going on in the world, it’s like, “Hey guys, we’ve been doing this all along.” It’s not that hard, you know? It’s not that hard to do it right."

While the narrative of sexual abuse and trauma are by no means a new narrative for many women who have been oppressed and marginalized around the world, Jessica Jones' approach to the subject has become a refreshing departure from the Hollywood norm.