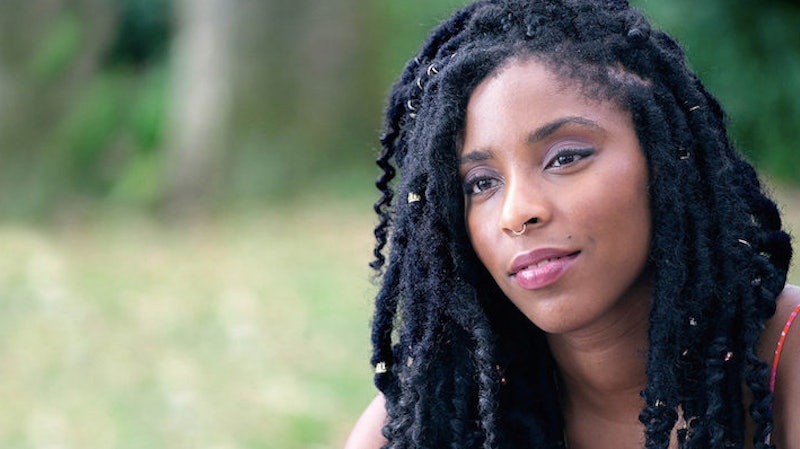 I'd like to tell you the relief I felt at the end of The Incredible Jessica James, a rom-com just picked up at Sundance by Netflix and starring the incredible Jessica Williams. I really would. Unfortunately, Williams describes the feeling at the end of this remarkably feminist rom-com more perfectly than I ever could when I speak to her at the Sundance Film Festival.

"Yeah, like, you don’t feel like a trash monster [when you watch it]," she says, sitting in an armchair with the idyllic scenes of Park City snow behind her.

And while the film is without a doubt one of those feel-good romantic movies that go so well with a glass of wine and takeout, it's not what I'd ever call "typical." Sure, the plot centers on a young, 20-something woman struggling to make it in Brooklyn who just so happens to have broken up with her longterm boyfriend. And yes, the film follows her as she meets a new dude, has a few romantic moments with him, and does the tried and true will-they-won't-they-dance (Williams also does a few actual dances, for the record, and they are wonderful). But, this rom-com does not speak the same language of all the other rom-coms out there. This one has been reading its required feminist texts and it's been paying attention.

"She’s like pretty externally confident, where’s she’s like, 'Yeah! I’m f*cking fine,'" says Williams, echoing her character who, in the film, fights with her love interest (Chris O'Dowd) by shouting "I'm dope!" as a retort. "[Jessica] doesn’t necessarily need validation and I think sometimes, like in other traditional rom-coms, it's like there’s like some sort of hole that she needs to be filled. And I don’t think there’s necessarily a hole externally that she needs filled, except her vagina."

"She’s dealing with her own demons, rather than this guy breaking her heart and, like, invalidating her somehow."

And it's true — Jessica is a character who never seems like she's searching for that one magic prince who will help all her problems fall away. Her life doesn't suddenly start getting better because she's got a new romantic prospect. She's a woman working through uncertainty in her career and the truly complicated emotions of a breakup rather honestly — at some points we even see those little declaration-of-love-followed-by-freak-accident-daydreams that literally everyone has about their exes (be honest, folks).

"It was more, like, factual. It was more matter of fact, like, 'Yeah, this is this relationship. This is what it looked like.' You always have those echoes where you’re like dreaming of them, thinking of them," says Williams of her character's grief about her ex (played by Atlanta's Lakeith Stanfield).

That realistic edge and the accompanying ownership that Jessica has over her romantic turmoil is something Williams' co-star, Noël Wells, says she loves about the film.

"I don’t think there’s necessarily a hole externally that she needs filled, except her vagina"

Sure, Jessica is also a woman who's open to seeing where a new relationship can take her, but that's not the point of her journey. The point is to get through to her star drama student at school; it's also to dive deep into the confines of female friendship when her latest submission is rejected by yet another prestigious theater. And on top of all that, Jessica James is a film that expresses just how OK it is to feel all the things so many women feel, to think the things we all think, and to acknowledge the way in which romantic possibilities happen to intertwine with the other storylines that drive our lives. Gee. Go figure.

Of course, the film also works to normalize a few other aspects of being a young woman, including our sexual appetites, with one of the funniest moments of the film: Jessica and her best friend, Chandra (Wells), frankly discuss the number of vibrators their have in their respective collections, opening the question: Are you a one-vibrator woman or do you keep an assortment at your disposal? Both answers are, of course, completely normal. And while it's a quick moment that wouldn't feel like such a big deal if we lived in a society that was more open about this sort of thing, the fact that this scene is a rarity makes it hugely important to the film's potential impact on younger viewers.

"Not all young preteens have adults in their life that [are open about sex] — I didn’t have that — and just seeing healthy sort of conversations like that, it's possible they would have made me feel less shameful," says Wells, as Williams nods her head. "We just have to break those taboos and not do it in a way that makes people just close themselves off to it. [We should] be like, 'Oh, we’re all really chill with it. What’s your deal? It’s OK, you can be chill too.'"

The film also carries a message of confidence in the face of all the uncertainty that plagues young women at every stage of life because that's the real struggle.

"Even if you have an issue of the moment or even if you feel down, you’re still f*cking awesome," says Williams when I ask what young woman should take away from her character. "There’s not black and white, there’s gray there, and if maybe if you’re feeling really terrible and sh*tty, that’s OK and that’s very valid. Remember that this is your dynamic and that you are able and capable and that you are also f*cking wonderful and still lovely, even when you feel like sh*t," she says, adding that she knows it's "like the longest t-shirt in the world."

But overly long moral or not, Jessica James is the sort of rom-com that might just help turn around the genre's tarnished, often antifeminist reputation. Or at least keep a few rom-com-loving feminists from feeling like "trash monsters."