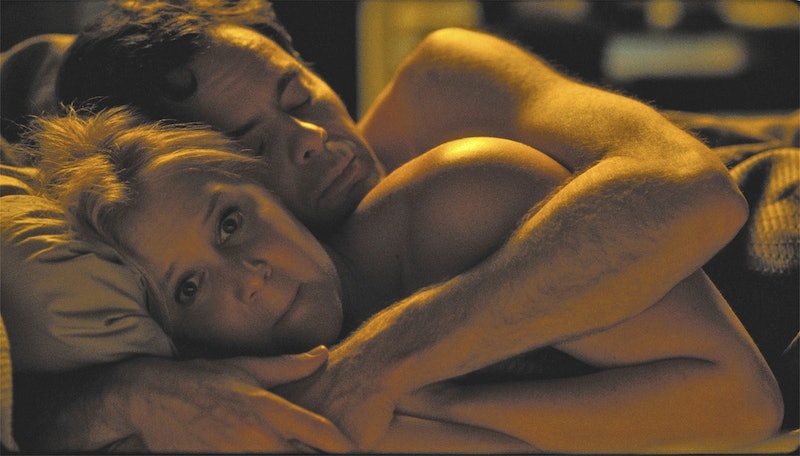 You've heard it before, and I'll say it again: the rom-com is a dying art. Once all the rage in the '90s, the romantic comedy has given way to serious love stories or flicks about friendship, and while those are all well and good, recent years have seen a serious lack of pratfalls and meet-cutes. There have been a handful of movies that've come close — The Proposal, Enough Said, Silver Linings Playbook — but they've been few and far between, and most of them can claim another genre too well (relationship drama, bromance-centered comedy...) to truly fit the bill. Mark my words, though: 2015 is the year the rom-com returns. And it's all thanks to Trainwreck , Amy Schumer's funny, heartfelt, absolute gem of a summer movie.

At first glance, Trainwreck might not seem like a rom-com in the traditional sense. During the months leading up to its release, much of the movie's promotion was focused on Schumer's dirty humor, or LeBron James' cameo, or the simple fact that it's directed by Judd Apatow, the very reason the word "bromance" exists. It seemed that while a relationship might exist in the movie, it was far from the focus. And that wasn't a bad thing; Schumer's comedy talents are what's propelled her to success, and typical Apatow fare, revolving around friendship and family, can be seriously funny.

Yet to my surprise, Trainwreck is a rom-com. A real one. There's awkward hesitation, cute first dates, silly miscommunications, prying best friends, and even an adorable montage where Schumer and Bill Hader's characters picnic at parks and kiss on the subway. It's not all dreamy love, of course — like any good rom-com, there are also unfortunate complications, conflicts of interest, messy break-ups and pain-filled monologues. It'd fit in perfectly with '90s classics like You've Got Mail and Jerry Maguire, except for one big, important thing: Trainwreck is unwaveringly feminist.

This isn't breaking news, of course; anyone who's paid the least bit of attention to the movie or Amy Schumer's antics over the past few years knows that the film is a feminist's dream. But it is a huge deal, and not just because it puts a realistically flawed female character in the spotlight (although that is major); Trainwreck's feminism is important because Trainwreck is, at its heart, a traditional romantic comedy. And that's a combination that rarely, if ever, occurs.

As countless people have noted, Schumer is not a "typical" movie star, according to Hollywood's standards; she's blonde and pretty, yes, but she's also foul-mouthed, average-bodied, and not afraid to call out the industry for its sexist double standards or controversial issues (that Bill Cosby skit, anyone?) Seeing her as a rom-com heroine, following in the footsteps of people like Julia Roberts and Meg Ryan, is nothing short of remarkable. She doesn't attempt to reinvent the genre or remove any of its elements, but instead keeps every convention that rom-com traditionalists know and love. All she does (and it's no small feat) is make them feminist.

Instead of a protagonist who's miserable that she can't find love, Amy is perfectly content in her singledom, and is in no rush to settle down. When she falls for Aaron (Bill Hader), she's genuinely apprehensive, because monogamy is such unfamiliar territory. She's not naive or in denial about her emotions, like so many rom-com protagonists; she knows she likes him and recognizes that he likes her, but all the same, she is understandably nervous about starting a relationship. When they do get together, there's no talk of her ditching all her friends, or not focusing at work, or otherwise messing up her life in some unrealistic but film-friendly way. She has problems with her family and her job, yes, but they're due to personal struggles she had before Aaron came into her life, and she takes the proper steps to deal with them in healthy, conscious ways.

Like most rom-com stars, Amy confides in a few female best friends, but unlike the others, these women don't try to tear her down, steal her boyfriend, or support her in some obviously fake away. They're truly there for her, willing to let her vent, provide assistance, and, when needed, give hard but necessary advice. They each have lives of their own; Amy's co-worker, Nikki (Vanessa Bayer) is neurotic and quick, determined to work her way up the corporate ladder regardless of consequence. Kim (Brie Larson), Amy's sister, has her life seemingly together, but is harboring resentment and pain of her own. They're both important figures in Amy's life, but aren't there solely to lift her up or bring her down.

Then there is the dialogue, the whip-smart references Schumer's script makes to everything from Johnny Depp to Glee. In a brilliant move, Schumer uses her screenplay to both adhere to rom-com conventions while skewering their cliches. She includes a falling-in-love montage, but comments on its weariness; she includes a massive fight, but doesn't let either character off easy; she points out a bench made famous from Woody Allen's Manhattan, but deadpans that it's where Allen met Soon-Yi. Schumer doesn't ignore or avoid the traditionalism of her movie, but instead embraces it, albeit while acknowledging every change she's making along the way.

It's no spoiler to say that Trainwreck ends exactly like you'd expect: after a painful fight, Amy and Aaron get back together, and presumably go on to live happily ever after. Every rom-com box is checked: there's a break-up, a reunion, a huge kiss, some swelling music, even a highly-choreographed dance scene. It's as satisfying a conclusion as any seen in Sleepless in Seattle or Notting Hill; the only difference? It's completely Amy's choice. She's the one who begins the process of reuniting, and she's the one who decides what, if anything, she's going to do differently if they get back together.

She wants to get back with Aaron, sure, but she doesn't need to; without him, she would be just as whole a person as she would be with him (albeit a sadder one, for sure). In their time apart, she didn't become a total mess, or give up on life, or fill any of the cliches of rom-coms past. Instead, she used that space to improve herself, drinking less and switching jobs, making changes for the sake of her sanity, not Aaron's love. When, eventually, they do get back together, it's romantic and grand, and certainly satisfying, but it's not necessary. Amy's self-improvement in his absence was simply the result of growing up and figuring things out, like all women do, and although his own good behavior may have been the impetus, it would've happened eventually regardless of where their relationship ended up.

Trainwreck is not a perfect feminist movie; for one thing, there's a bit too much explanation for Amy's behavior (couldn't a girl just like sex and drinking without having had a bad childhood?) And it's not a perfect rom-com, either — Aaron is a bit of a one-dimensional character, and more than a few jokes fall flat when they're clearly meant to sting. But it's a romantic comedy that happens to be feminist, and I'll gladly take a few small complaints if it means a movie like Trainwreck can exist, and a woman like Amy Schumer can be its star.