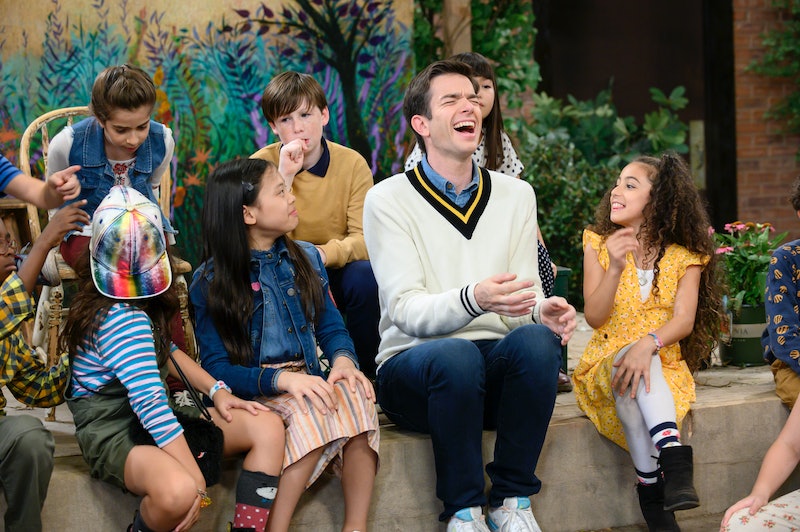 He may swap the cardigan for a pullover knit, and he doesn't juggle his shoes or feed goldfish. But there's no mistaking that John Mulaney & The Sack Lunch Bunch channels a darker, funnier Mister Rogers' Neighborhood. Like Mr. Roger himself did for over 20 years, Mulaney walks a slew of kids through some of life's biggest questions. But instead of reaching conclusions about kindness and sharing, they talk a lot about fear and death.

At first, it feels totally weird, and Mulaney's disturbing riffs next to children are awkward. But if you stop and listen (and look past a few gimmicks), you eventually realize his underlying goal, which is to join unbiased kids and adults, and find that despite their separating years, they all share a similar fear: death, and losing people they love. And it becomes oddly comforting.

If you thought 10-year-olds have nothing to stress about, you thought really wrong. It turns out that they have a lot on their minds, and The Sack Lunch Bunch aims to unpack that. One cast member, Jacob, tells the camera he's afraid of an asteroid hitting the earth, and drowning. "I would scream and cry before swimming class, because I was afraid I was going to drown," he says. "Because I don't want my life to be over yet." Who does?

Nostalgic, colorful transition graphics, various comedy sketches, and musical numbers separate each kid's fearful confession. And a few special guests including Richard Kind, Natasha Lyonne, Jake Gyllenhaal, and André De Shields share theirs, too. Aside from the standard snakes, spiders, and clown phobias, everyone, in one way or another, admits a fear of death, be it for themselves or someone close.

In one scene, Mulaney abruptly breaks the news that the actor who plays Googy, the show's dinosaur mascot of sorts, has died of an enlarged heart. It leads him to awkwardly reveal that he has memoriam photos for the entire cast, and he asks the kids if they want to see them. Visibly disturbed, they say no, so he brings up a photo of himself. "That's me doing standup," he says to the kids. "It says 1982 to who knows when."

His casual approach to death is off-putting at first, but his intention later becomes clear. He wants to make the kids, the people watching, and himself more comfortable with the thought of dying. Why? Because it's inevitable, and like De Shields says in his confessional, the fear of it is a learned burden.

"I believe fear, like any prejudice, or bias, or predisposition is taught and therefore learned," he says to the camera. "It's the way we control one another in this world, in this American society. I know that fear is false, an illusion."

Gyllenhaal says his biggest fear is losing his family or his iPhone, and Mulaney's wife, Anna Tendler Mulaney echoes that. More specifically, she fears someone she loves dying a violent death. Mulaney describes his ideal funeral, and says he wants it to be a sad occasion. "I want you to be happy," he says. "But I do want you to miss me."

It's strange to hear Mulaney talk about his own demise, but in a way, it's also comforting. Because it acknowledges that most people, young and old, have similar existential thoughts. And though they're uncomfortable to explore at times, you don't have to shoo them away. The Sack Lunch Bunch applies that logic to all fears. No matter what they are, or how silly they might seem, it's OK to talk about them. And it's definitely OK to laugh about them, too.